What are Meaningful Vocational Options for Alaskans? 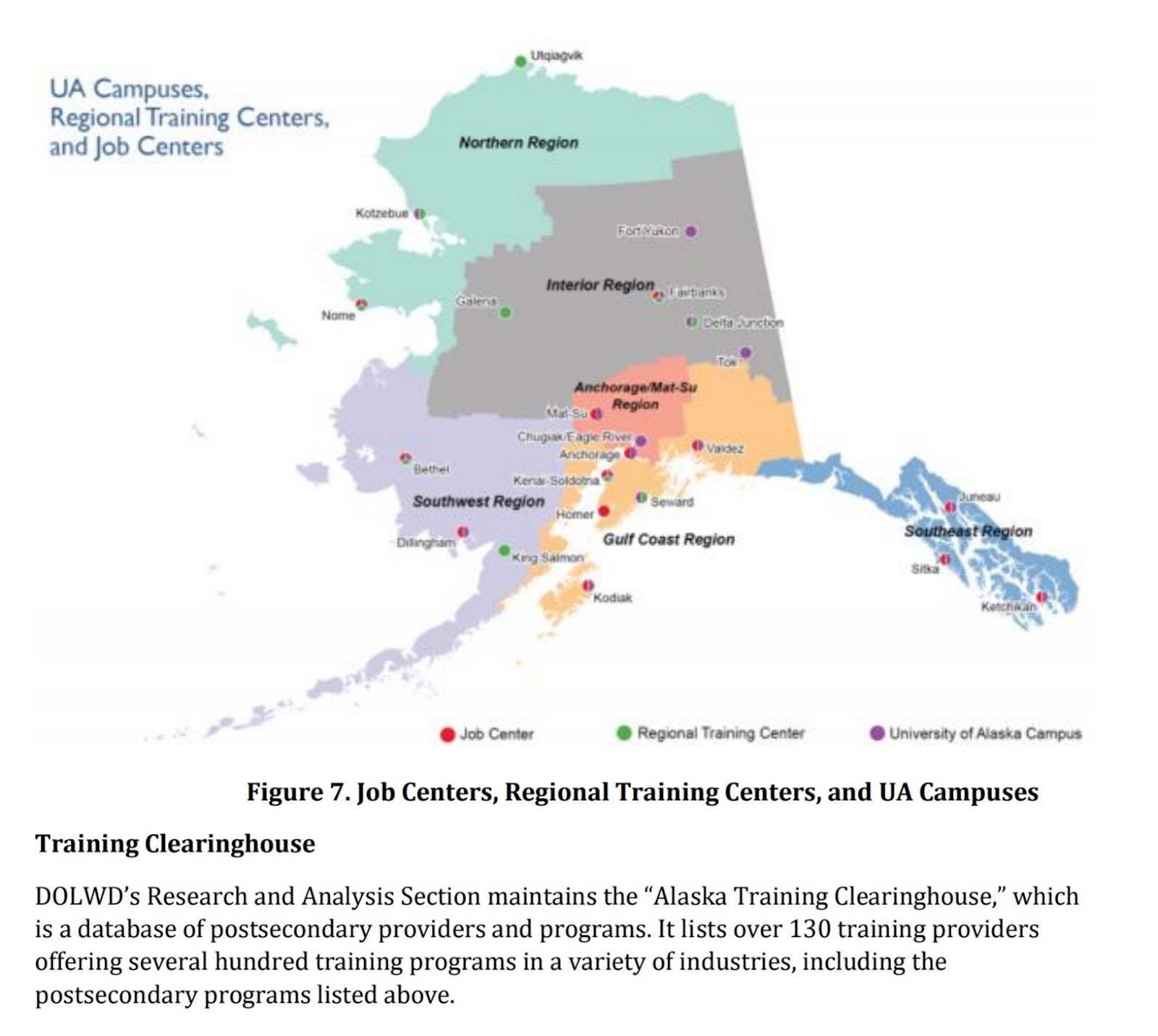 Alaska’s economy is very specific about what human resources it needs. To be successful in this job market, training after receiving a high school diploma or GED must consider what have been identified as in-demand priority occupations.

Let’s look back a few years and bring the needs of Alaska’s economy forward to today.

The Alaska Department of Labor and Workforce Development (DOLWD) in July of 2017 issued its monthly Economic Trends magazine looking at the cost of living in Alaska. At that time Economist Neal Fried reported that inflation hovered near a record low for a third straight year during 2017, with the Anchorage Consumer Price Index increasing just 0.5 percent. That rate has been lower just four other times since 1960, when the Bureau of Labor Statistics began producing inflation data for Anchorage, according to this
report. [1]

The Anchorage rate of inflation was much higher than the national rate over prior years, due mostly to a cooling Anchorage housing market, with continuing recession. By contrast, the nation’s gross domestic product (GDP) in 2017 increased at the end of July by 4.1 percent (April through June). This is the fastest growth in four years with Outside housing markets generally robust.[2]

A prosperous Outside economy provides incentive for young Alaskans to leave for better job opportunities elsewhere.

No other economic indicator has more daily ramifications for people than inflation. It’s tied to bargaining agreements, wage negotiations, child support payments, real estate agreements, and minimum wage adjustments. Because inflation has been so low, Alaska raised its minimum wage by just a nickel in 2017 and four cents in 2018, explained Fried in that same article.

Further, Alaska’s economy was rated worst in the United States in the third quarter of 2017, according to Business Insider: Alaska is among the top 10 state’s GDP rates–with a per capita of $70,574–while average weekly wage rate is $1,012.09. Alaska’s labor market was the weakest in the country with a December 2017 unemployment rate of 7.3 percent–one of only two states that lost nonfarm payroll jobs.[3]

Good paying jobs in Alaska are reserved for people trained for them, but it costs more to live in Alaska–always has. That is the first reality of anyone expecting to make a living here. The second reality is that this state has been losing jobs; May 2018 was the 32nd consecutive month Alaska has recorded job losses—down -0.6 percent statewide.

I reference pre-pandemic status of the state economy so we can build a strategy from what we had before to what we need now. Given this reality, what are the possibilities for a young person determined to stay in Alaska expecting to enter a career
that would provide long-term quality employment security? Let’s look at the unemployment profile:

An estimated 92 percent of Alaskans have a high school diploma or higher, compared to 86 percent nationally. This is good as far as it goes, but the academic outcomes of Alaska Government Schools makes this a meaningless statistic.

During the mid-2000s, Alaska High School Graduation Qualifying Exams (HSGQE) under the federal No Child Left Behind Act initiative were given twice to high school sophomores, and twice again each successive year—11th and 12th grades–until passed. HSGQE measured 10th grade skills. Certificates of Graduation were given in lieu of diplomas until the HSGQE test was passed, even allowing students to take the test when they were no longer in attendance.

When the Alaska Legislature revoked requirement to take the HSGQE in 2014–with passage of Gov. Bill Walker’s HB 278–all students who could not pass it were given their diplomas retroactively, thus reducing the value of all public education graduation
certifications for the past nearly two decades,[4]

But those former students still must find jobs.

Using The Alaska Workforce Innovation and Opportunity Act (WIOA) Combined Plan 2020-2023 we can examine which Alaska jobs have good potential for employment given targeted training. According to this report, Alaska enjoys a concentration of typically high-wage natural resource and mining jobs that are more than three times as concentrated here than in other parts of the nation.[5]

Alaska hire–the prioritizing of Alaskans over bringing other skilled workers to the state—has always been a political challenge, so methods have been developed to measure it. Alaska has long been the only state that requires employers to report the occupations of their workers as part of mandatory unemployment insurance reporting. 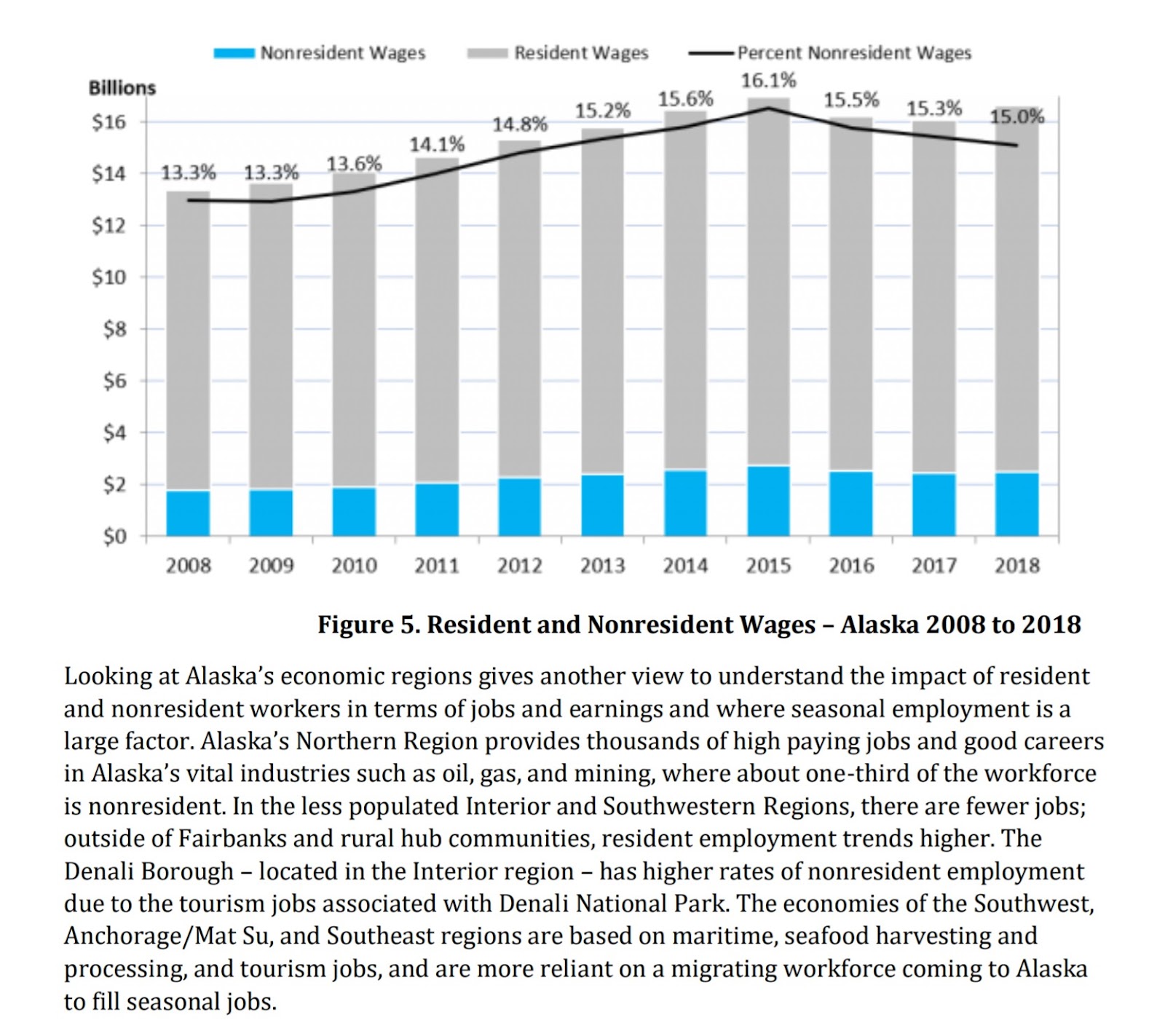 This detailed occupational data reported by employers, together with Permanent Fund application data on residency of individual workers, allows Alaska to produce a report each year showing the industries and occupations with the highest percent of nonresident hires. Certain “Priority Occupations” have been identified as generally providing a livable wage and being either difficult to fill with qualified Alaskans or in high demand as a result of projected growth or attrition/turnover.[6]

When considering training for future employment the smart person will look at categories of employment currently held by non-residents offering high pay.

Certain Alaska industries have been identified as Priority Industries because they are thriving in Alaska and need employees in identified Priority Occupations. Reliance on nonresident workers in priority industries and in-demand occupations was explored in a 2016 study by The McDowel Group, entitled: titled Cross-Industry Workforce Development Priorities. 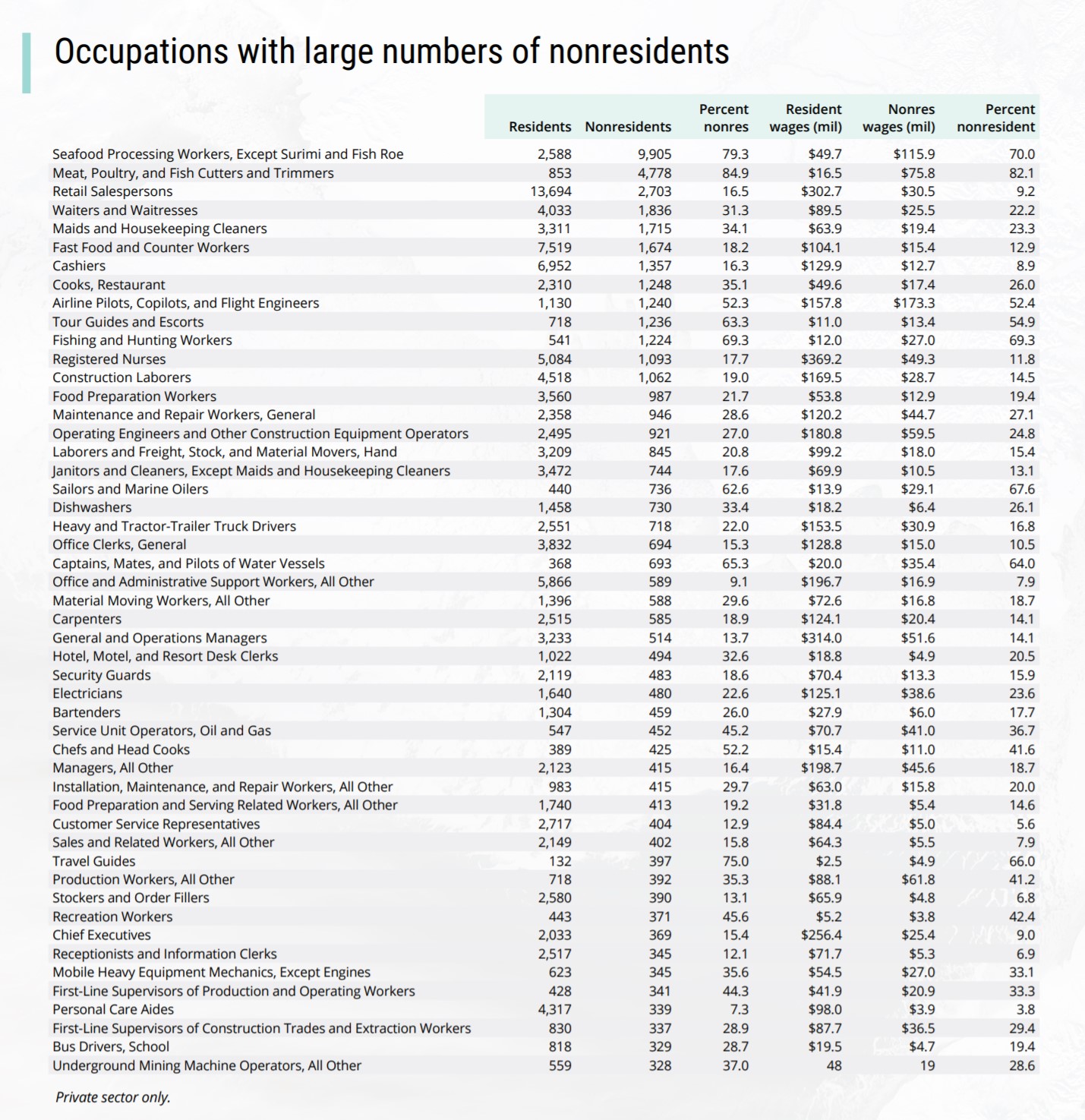 This study identified key skills, trainings, and concepts needed across Alaska’s construction, oil and gas, mining, health care, and maritime industries. The Alaska Process Industry Consortium (APICC), made up of companies in those Priority Industries, paid for the study. The goal was to identify priority occupations and workforce needs in common between the various priority
employers.[7] 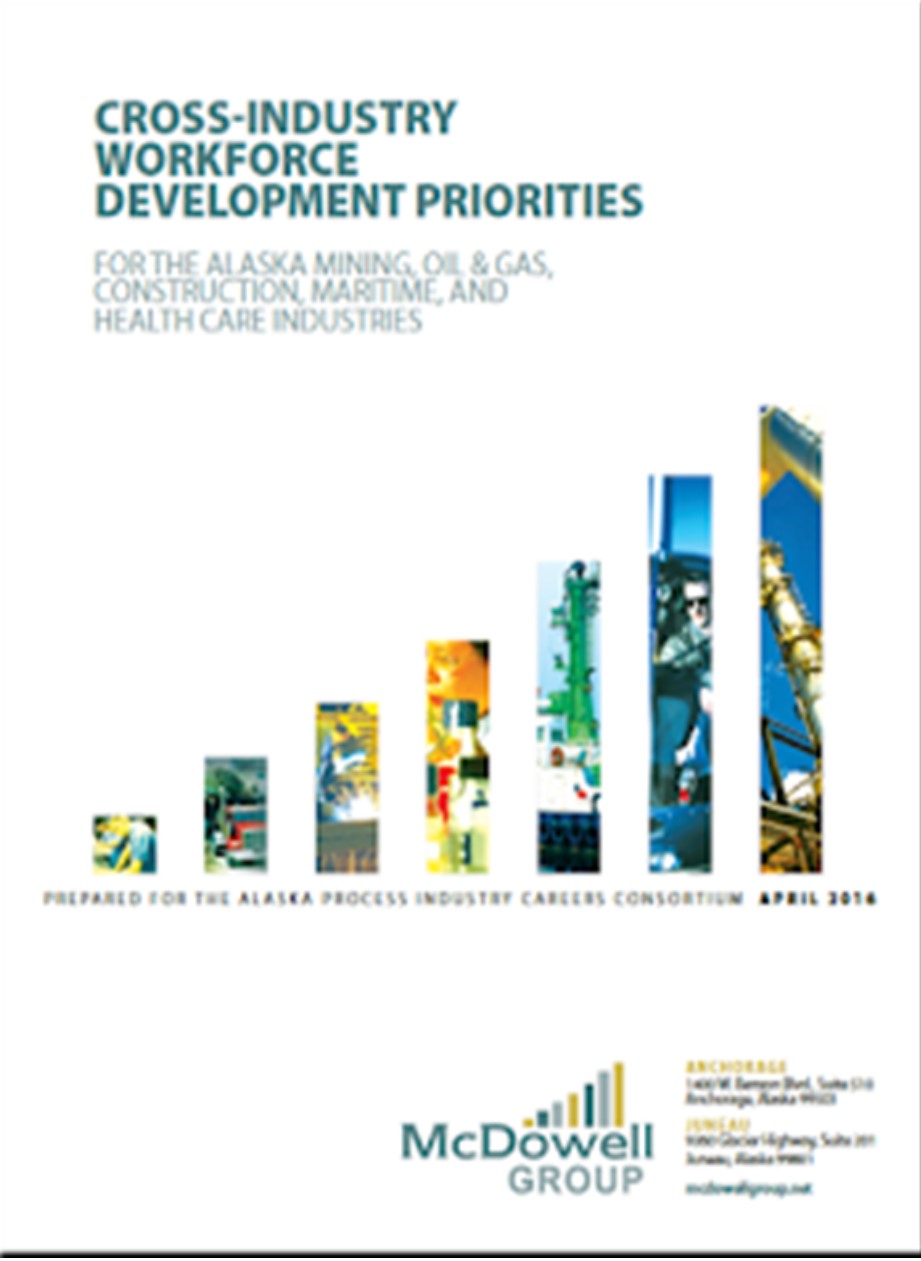 A young person looking for a skill set leading to a broad-based career in Alaska’s economy should consider what they want to do and how they might assure employability, as explained in this study.

Instructional note: This is boilerplate jargon for what employers want in ANY high skilled position. Basic skills, plus training for specific employability lead to a workplace tailored for Alaska’s economy. 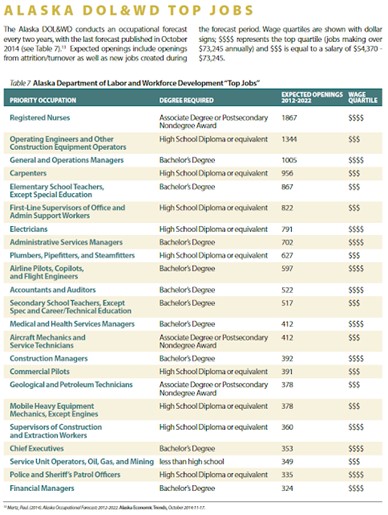 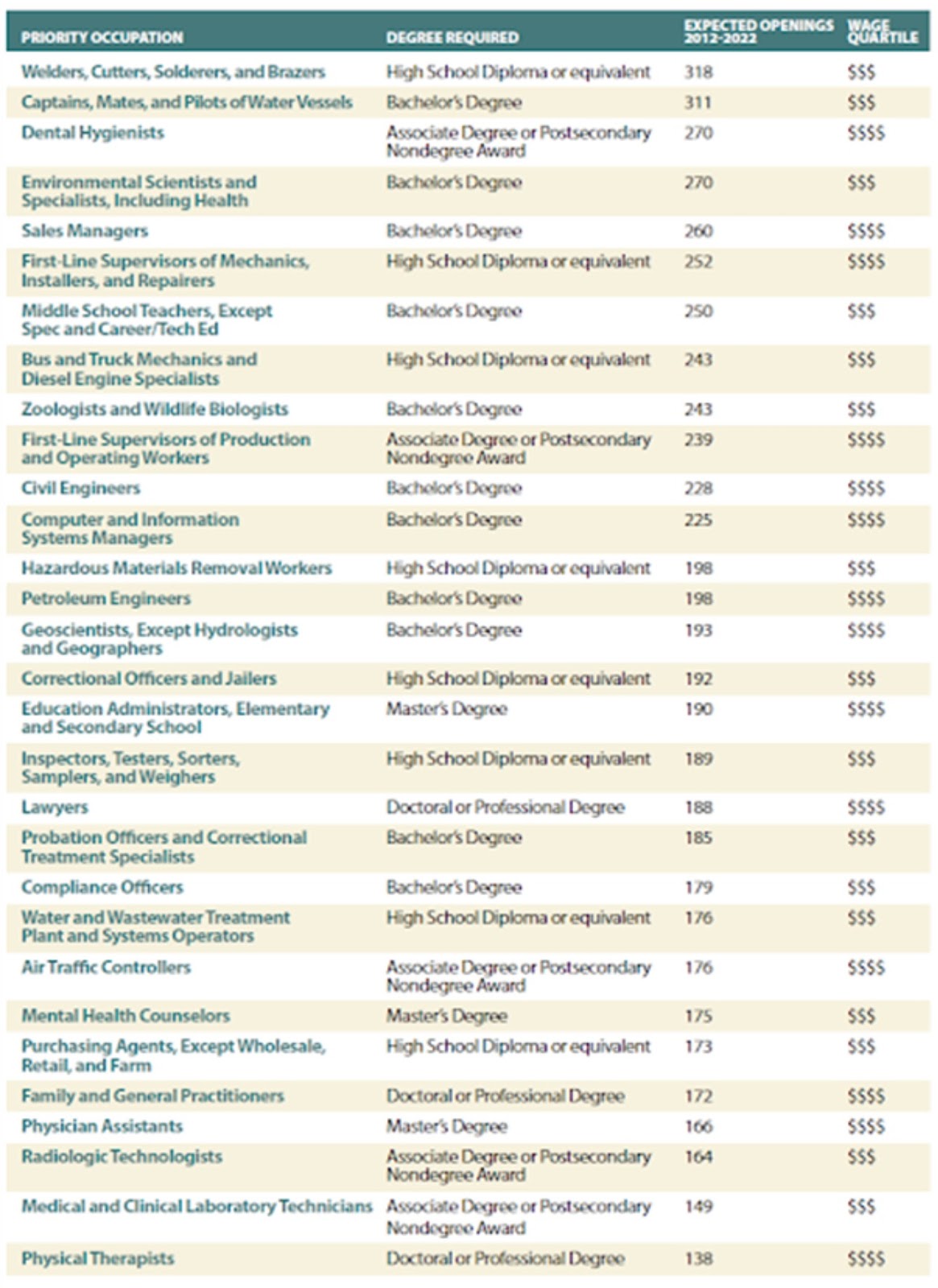 Of 53 listed Priority Occupations in this report, 17 require a minimum of HS Diploma/GED while 8 more mandate an Associate Degree or Postsecondary Non-degree Award. 21 other job categories call for a Bachelor degree and only 3 require a Master’s Degree.

Given this cross-section of job categories, a person seeking career stability by training into skills having multiple priority employment
possibilities, can also cross reference priority jobs to skills with the following charts: 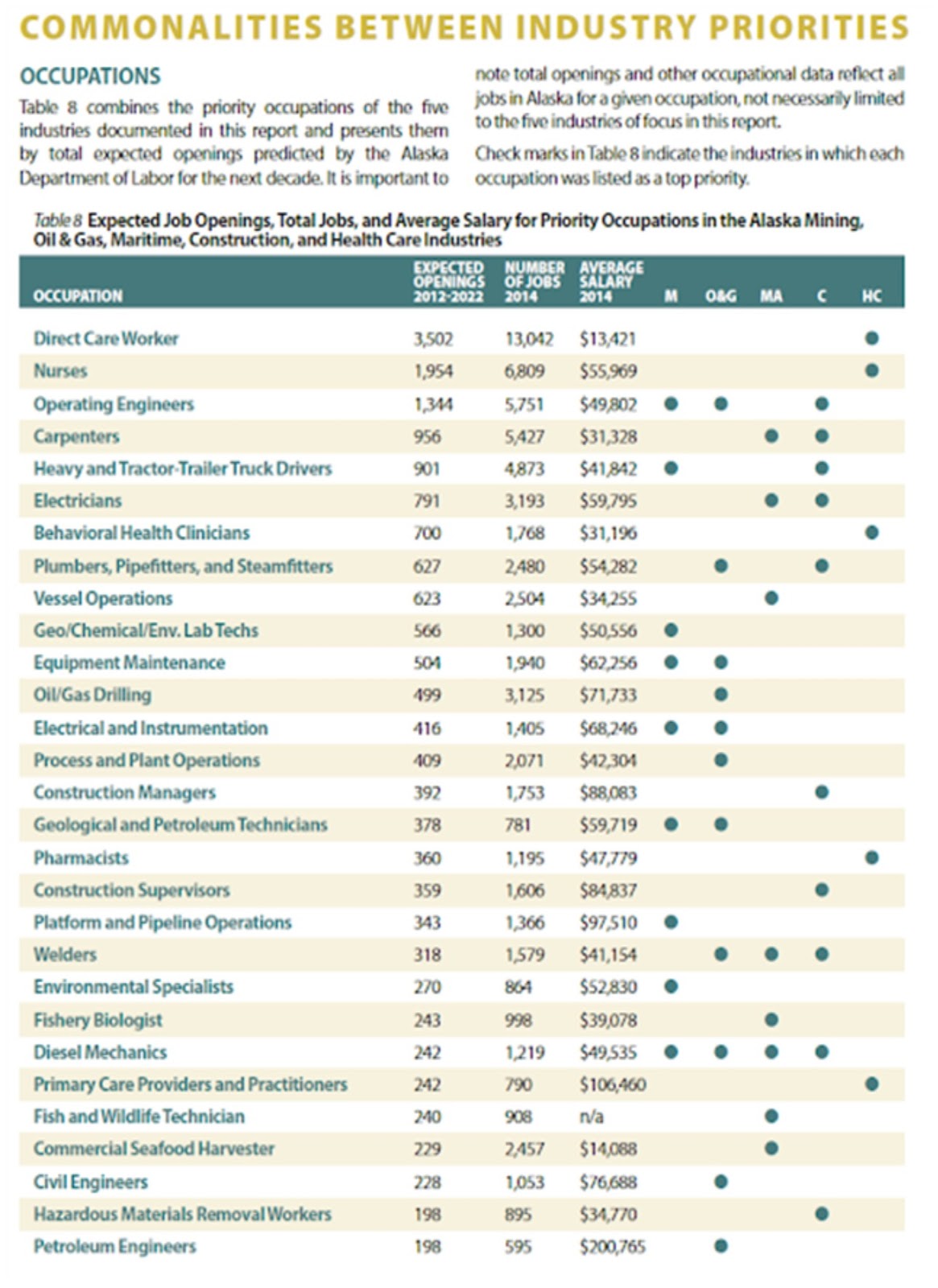 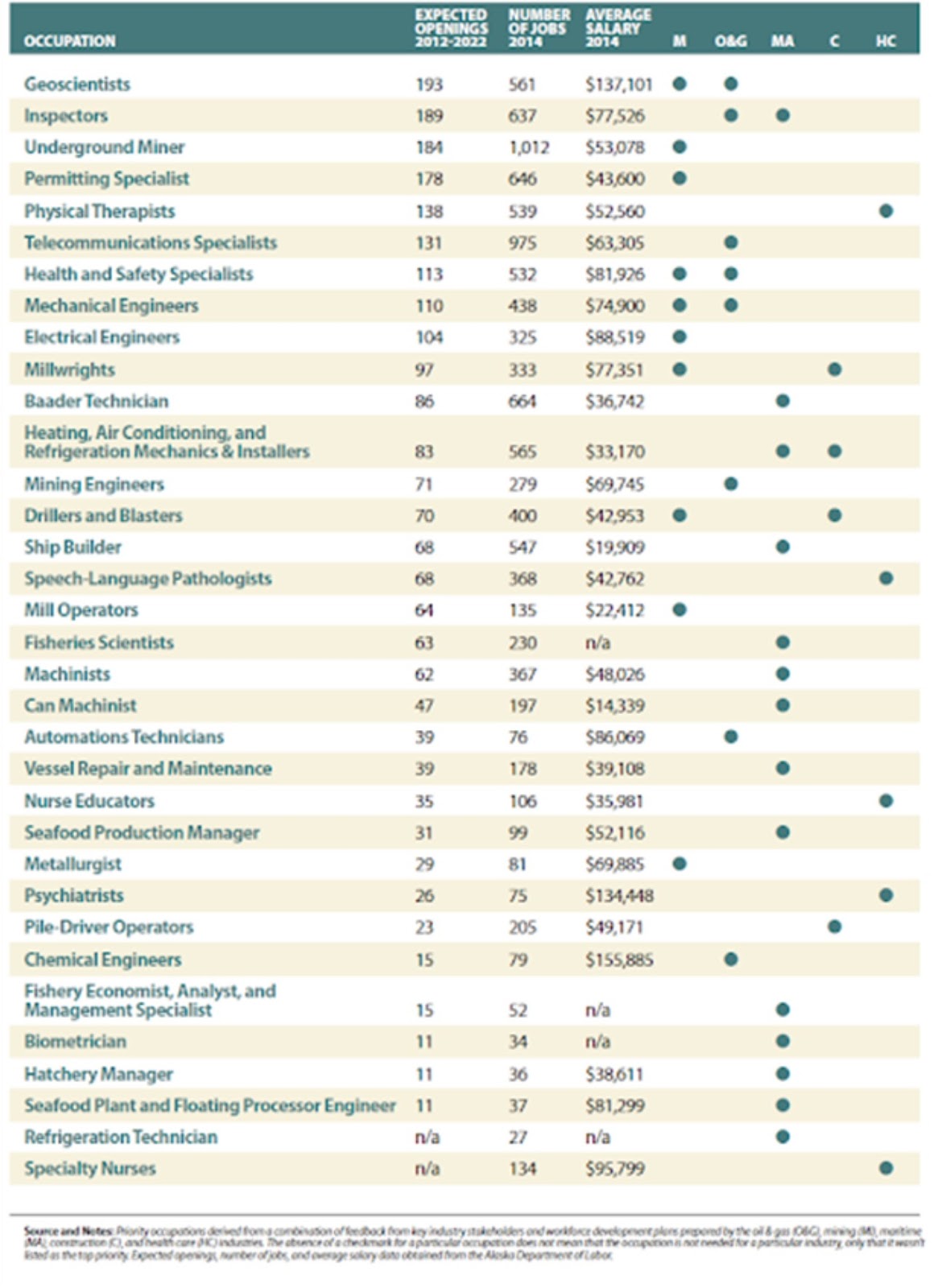 This information over the last five years has been disrupted by an international pandemic but as we in Alaska recover our economic vitality the need for trained employees will increase. By looking at what potential jobs will be needed perhaps more Alaskans who wish to stay and participate in the economy will be able to do so.

[3]Business Insider Ranking of the States