Expectations of The People

Our Alaska Constitution states clearly in Article I Section 2. Source of Government: all political power is inherent in the people. All government originates with the people, is founded upon their will only, and is instituted solely for the good of the people as a whole.

Once elected, many don’t seem to care about The People anymore. They flock to backwater Juneau for the annual session, to be immediately kidnapped by special interests who issue ransom notes for their return. These elected officials—empowered by our votes—then form majority coalitions to accommodate special interest demands. They conspire to see how long they can keep the ball in the air before returning to their Districts with mostly crumbs. For one example of the legislature’s belligerence, The People asked by referendum in 2006 for session to last 90 days.[1]

It has seldomly ended within 90 days.[2]

Once in Juneau elected representatives of The People embark on Alice’s Adventures in Wonderland, patronizing voters from afar. The People watch as though we have fallen into a rabbit hole and everything is a wonder.

`And how many hours a day did you do lessons?’ said Alice, in a hurry to change the subject.

`Ten hours the first day,’ said the Mock Turtle: `nine the next, and so on.’

`What a curious plan!’ exclaimed Alice.

`That’s the reason they’re called lessons,’ the Gryphon remarked: `because they lessen from day to day.’[3] 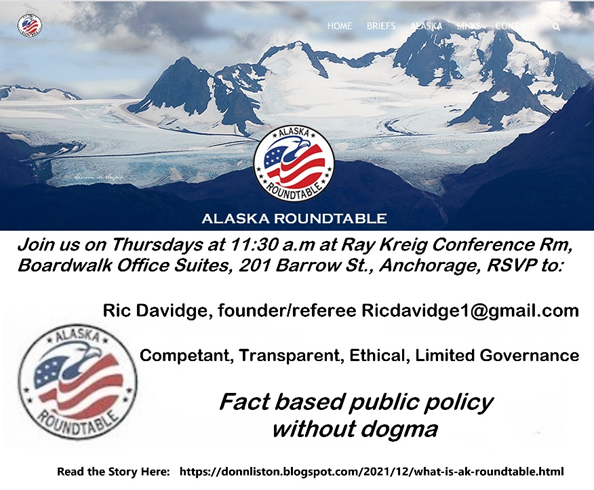 The author of Alice’s Adventures in Wonderland/Through the Looking Glass used these fantasies to teach his daughter and her friends how to play chess. But Alaskans are tiring of the games being played in Juneau and would like to see their number one concern addressed: Restoration of the statutory formula for payment of the Permanent Fund Dividend, and payment of full balance owed. Time is of the essence. 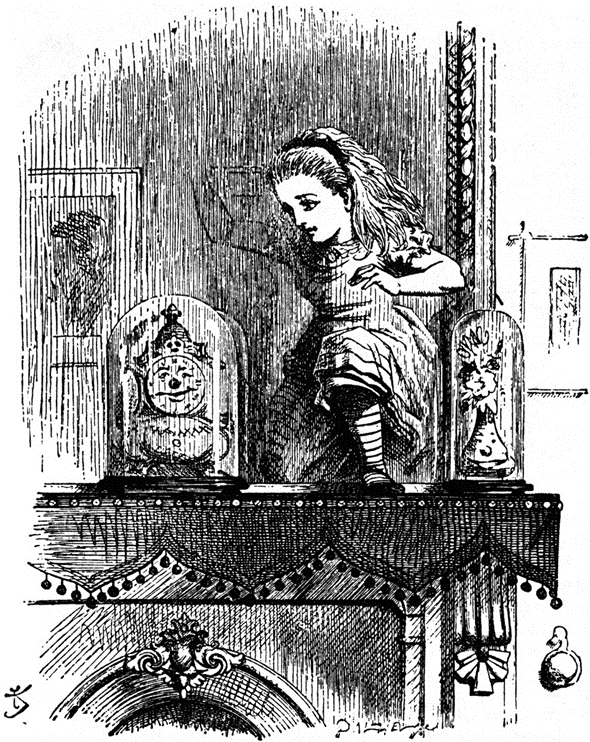 Let’s view this Through The Looking Glass. When exactly can we, The People, expect our legislators to meaningfully address the largest issue they are trying to ignore—whether to follow THE LAW AND PAST PRACTICE for Alaska Permanent Fund Dividend Distribution?

The legislature cannot change the law without a vote of The People, so they skirt the law and manipulate the law–while continuing to increase the state budget as many are forced to leave the state–and they count on Alaskans trained for ignorance in our failing government schools to accept their arrogance. But, as former Alaska Gov. Jay Hammond (one of the founders of the Permanent Fund) had anticipated, the PFD would cause Alaskans to become strong supporters of the Permanent Fund to assure it carries on to future generations.

That is happening now.

Alice laughed. “There’s no use trying,” she said: “one can’t believe impossible things.”

“I daresay you haven’t had much practice,” said the Queen. “When I was your age, I always did it for half-an-hour a day. Why, sometimes I’ve believed as many as six impossible things before breakfast.”

We have seen a legislative spectacle in Juneau over at least the last decade. Now The People must reveal and target those who will be replaced in elections looming later this year. We cannot count on voters educated in government schools to know why they are being denied their share—especially in rural Alaska or the poverty districts of Anchorage controlled by public sector unions. 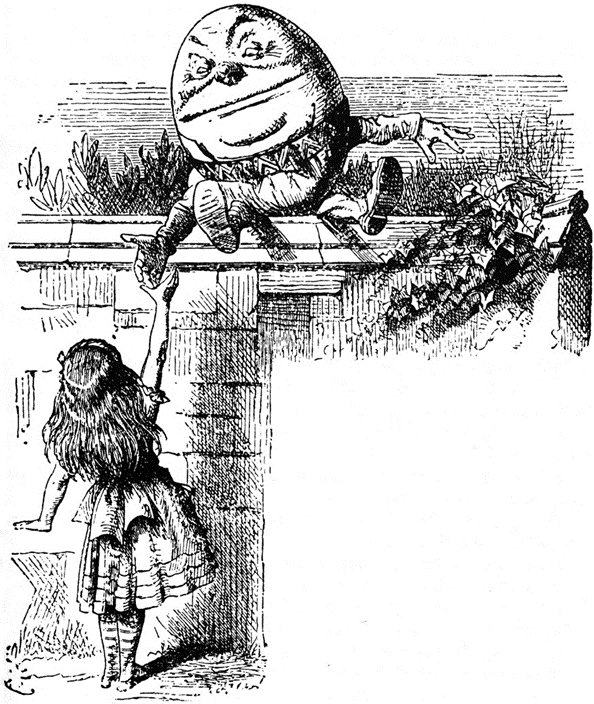 Readers might recall The People replaced about half of the legislators we needed to defeat in the last election. I wrote one year ago about the incoming legislature. This will be the second half of the 32nd Alaska Legislature. So far it has been a do-nothing legislature going for 217 days and passing the fewest bills (37) of any full session in the state’s history.

Pay, benefits and per diem are the dividend THEY extract from State government. Recently some have the guts to say they need a raise! 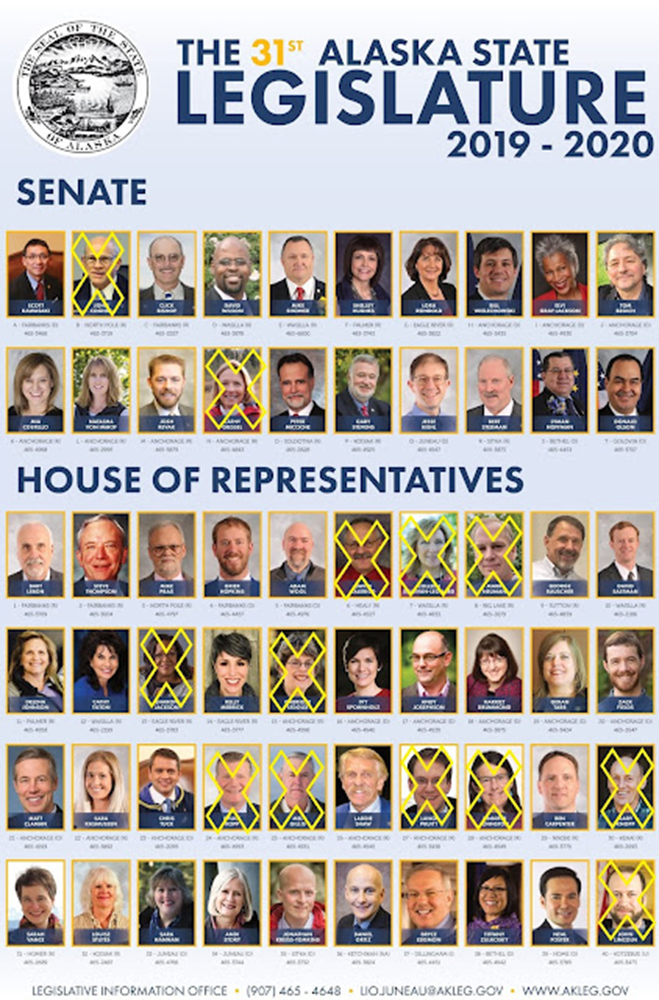 Alaska voters have experienced a learning curve as former Gov. Bill Walker and legislative majority coalitions decided to ignore the more than 40 year tried and true formula for distribution of the Dividend to Alaskans from earnings of the Permanent Fund. This was done to accommodate the public sector unions and other special interests wanting to buy more government. Voters saw some of these lawless legislators refuse to meet in Wasilla at a Special Session called by Gov. Dunleavy–who is specifically charged with determining where the Special Session shall be held. Instead, the mongrel majority met in Juneau in defiance of the governor and the Alaska constitution. Voters have also learned over the last year about the organizing tool of a Binding Caucus as a means for a few legislators in positions of power to muscle the rest into ever increasing budgets that nobody is accountable for. So now that the 2020 elections are over let’s look at who is–and is not–going back to Juneau. At this time the House is having trouble organizing again as it did in the last session. So let’s consider what we might expect from the 32nd Alaska Legislature convening January 19, 2021.[4]

Background of the Permanent Fund

Formation of the Alaska Permanent Fund was an attempt to keep from wasting our mammoth resource wealth by annually distributing half of the earnings to The People for their own use. You may review that history at the Permanent Fund Corporation’s website:[5]

There you will find a description of the mechanics leading to creation and institution of The Permanent Fund and the Dividend, meant to give The People a stake in the resource bounty they own. An axillary goal of this wealth account should be efficient and honest state government.

Alaska’s Constitution does not allow for dedicated funds, so in order to direct these oil revenues into a permanent fund, the Constitution had to be amended. Placing the founding language for the fund in the Constitution had the added benefit of helping protect it from being spent by the Legislature without a vote of the people. A Constitutional Amendment requires a majority vote of the people of Alaska, and the item was put on the 1976 statewide general election ballot. By a margin of 75,588 t o 38,518, a Constitutional Amendment establishing the Permanent Fund was approved.

The first Permanent Fund Dividend check for $1,000 was issued in 1982, following a bruising court battle, in which the initial plan for a distribution of dividends–with amounts given on a graduated scale based on length of residency–was ruled unconstitutional by the Alaska Supreme Court.

In his book “Tales of Alaska’s Bush Rat Governor, Hammond explains the genesis of the Permanent Fund:

…as governor I believed the best approach was to divert money into a dividend-dispersing investment account, in which all Alaskans were “stockholders.” To promote this idea I initiated the Alaska Public Forum, a traveling town meeting, to whip up support for a program…

Public response was underwhelming. Despite lack of encouragement, I introduced a bill to create : ”Alaska, Inc.” by amending the constitution.

Under this proposal, Alaska, Inc. would receive 50 percent of all natural resource lease, bonus, royalty and severance tax dollars, and put them virtually out of easy reach by requiring a statewide vote before the principle could be invaded. Annual earnings from the account
would be divided in half: fifty percent would be dispersed in cash dividends, to all Alaskans, in the form of one share of dividend-paying “stock” for each year of residency since statehood…

Since absolute equity was a necessary objective I preferred to let each Alaskan—not the politicians—decide how he or she should
spend some of the resource each owned.[6]

The formula for determining how much would be given out for dividends was changed then to accommodate legal requirements and placed into statute. It has been used now over four decades until 2016 when Gov. Bill Walker and a renegade legislature changed practice without changing the law.

In his 2011 book Diapering the Devil, Hammond examined some of the events that had occurred regarding the Permanent Fund since its formation, describing how he debated all candidates for governor in 1990 during which time former Republican Gov. Walter Hickel promised to veto any appropriations of The Permanent Fund for other than inflation-proofing or dividends if re-elected. Following Hickel’s single term, Democrat Gov. Tony Knowles, in 1999 insisted a fiscal plan passed by the Legislature, including use of fund money which otherwise could be used for dividends, be placed on the ballot. It was defeated by a whopping 83% of the voters, largely be cause no lid had been placed on the amount of dividend dollars that could be so spent.[5]

The Permanent Fund was the third rail of Alaskan politics—the one that can electrocute any politician who so much as touched it. Gov. Walker and the Majority Coalition of the Alaska Legislature bridged that rail and now it is up to The People to correct this electrical fault. 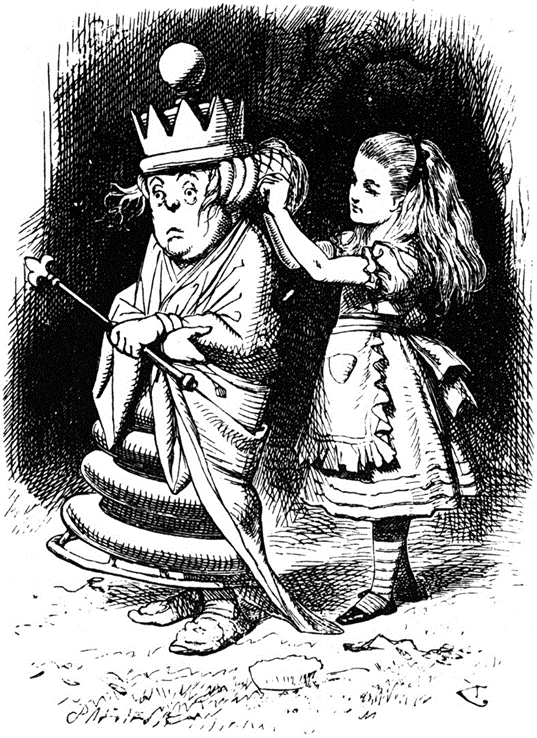 Today The People are outraged. We know exactly how much is owed by elected citizen legislators who have done pretty well for themselves financially since 2016. Some of us have received every dividend check, and our Alaska economy has benefitted greatly from our use of dividend funds, but our patience is running out.

What the Legislature Must Do.

Watch what happens when the Alaska Legislature convenes in Juneau this year. There will be a lot of hoopla about pre-filed bills to do all kinds of wonderful things. These are distractions. We will hear about how Legislators are impacted by the weather in Juneau and how we can call into any hearing and our voice will be heard. More distractions. Meanwhile the pittance PFD The People received last year would not be enough to pay for a round-trip to Juneau from the population center rail belt to visit legislators we voted for last election. 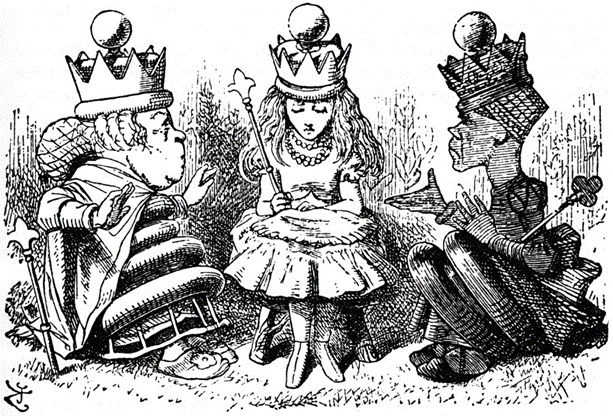 They don’t care. You don’t have a lobbyist whispering in their ear at every opportunity. But they are whistling past the graveyard:

If
the Alaska Legislature were truly accessible to The People, these games
would not be the same. Statehood was about severing the economic and political
stranglehold Seattle had on Alaska. More than 60 years later we are still in
the grip of Seattle through its suburb of Juneau. Nothing demonstrates this
like the tone deafness of the Alaska Legislature when it comes to statutory
requirements for PFD distribution.[9]

Let
your legislator know how you feel about this duplicity. Why don’t they want The
People to vote on constitutional amendments proposed by Gov. Dunleavy? Tell your
legislators they have ONE JOB and when they complete that job we might be ready
to reflect on what has happened since 2016, with prejudice–as Alice did.

Oh, I’ve had such
a curious dream!’ said Alice, and she told her sister, as well as she could
remember them, all these strange Adventures of hers that you have just been
reading about; and when she had finished, her sister kissed her, and said, `It
WAS a curious dream, dear, certainly: but now run in to your tea; it’s getting
late.’ So Alice got up and ran off, thinking while she ran, as well she might,
what a wonderful dream it had been.

The People will prevail. Our system of government depends upon it. 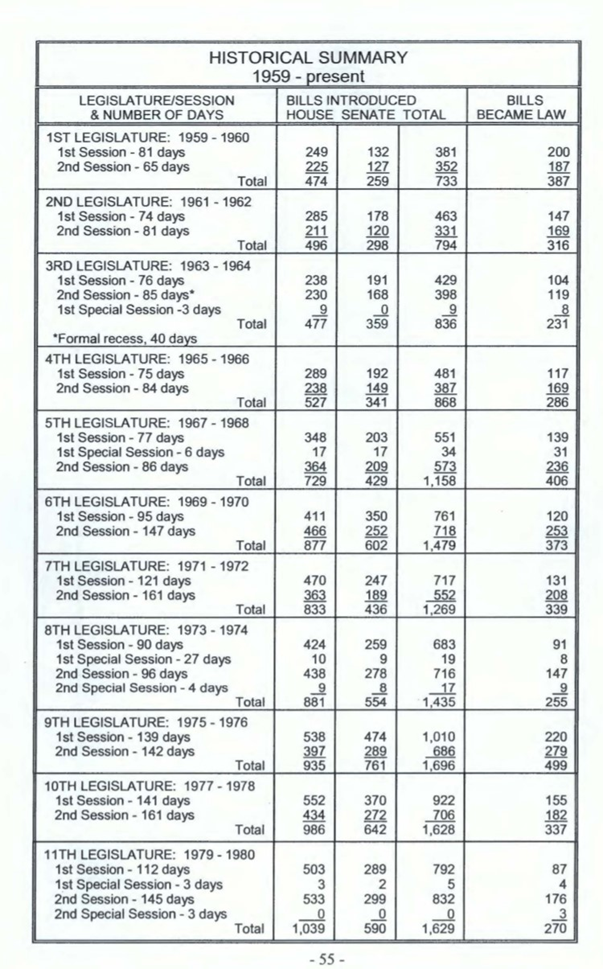 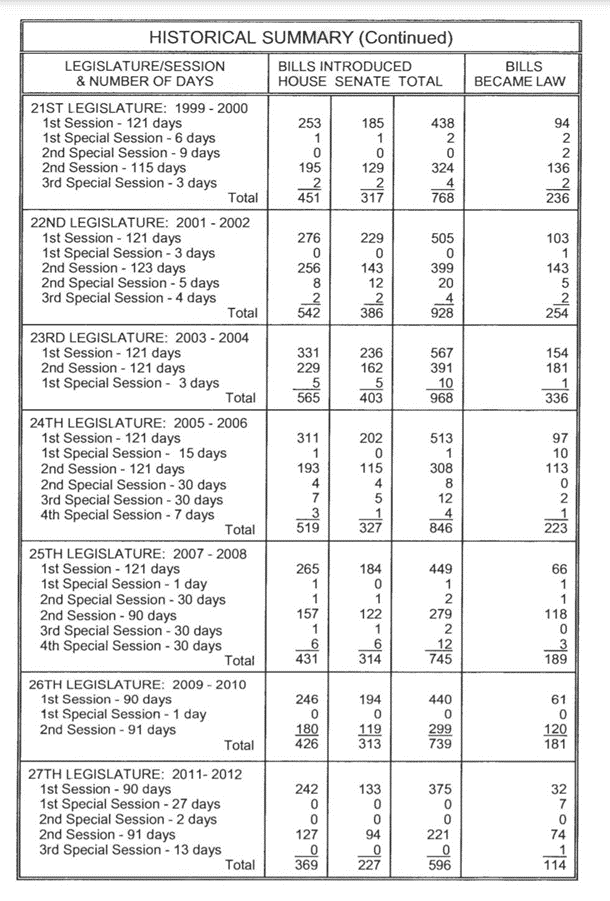 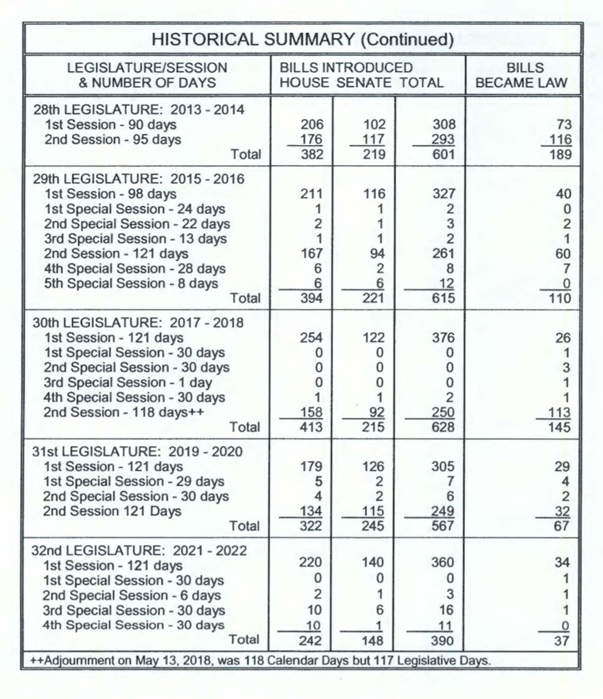 [4]Hopes for the New Legislature https://donnliston.co/2020/12/legislative-hopes-for-this-year.html 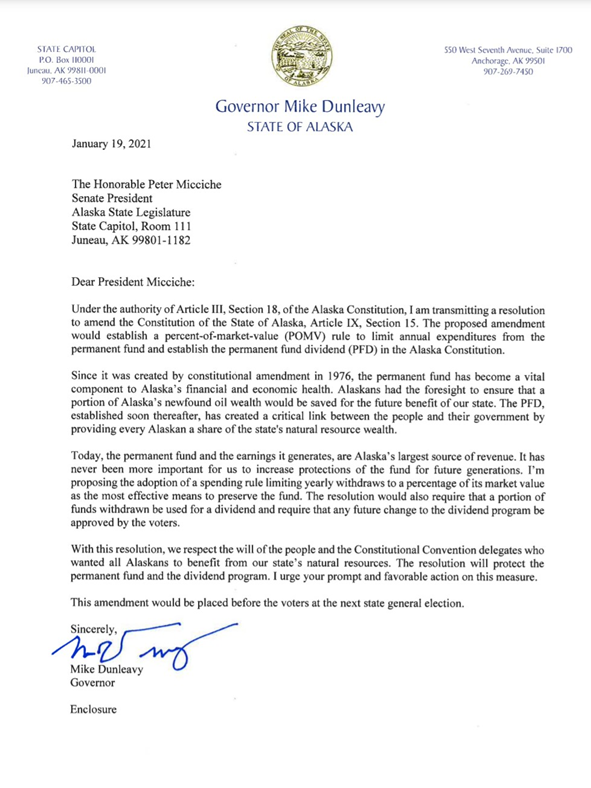 [9[One represwntative packet of testimony on this bill: