Who decides whom you can vote for in Alaska?

As a young man just graduated from East Anchorage High School in the summer of 1969 I was at loose ends. I had built a camper on the back of a 1962 Chevy truck after Dad kicked me out of the family home mid-way through my senior year and lived in it until spring, but I finished high school. That summer I ended up spending quite a lot of time cleaning up a construction site where legislator Nick Begich was building some apartments. I also took care of Nick Jr., Mark, Tom and Stephany when needed.

That summer I also learned first lessons about what a politician must do to get elected.

Nick let me stay at their home and we spent many a late night reading constituent mail and discussing issues of the day—as a possible oil pipeline was proposed to be built from Valdez to Prudhoe Bay. Nick showed me the election district map of the state with his east Anchorage senate district clearly marked. A former teacher, Begich had gone door-to-door and maintained a file of 3 x 5 cards with names and pertinent information about every person he met. That’s what it took to be elected first to the Alaska House of Representatives, and then to the Senate.

District voters sent Begich to Juneau to represent them in the legislature.

In high school we voted for class president and prom queen based on popularity of candidates. Typically, they were students who made good grades, participated in Student Council, and pretended to represent all students when school authorities needed compliance. Adult elections are different; schools are not constitutional republics.

In adult life a good politician knows the district to be represented and the hopes and dreams of his/her constituents. For some of us our wish is minimum government and maximum opportunity. For others it is more
government and desire to be loved in a cruel world.

What determines the constituency of any district?

Alaska’s constitution provides for Legislative Apportionment in Article VI, establishing distribution of legislative seats among election districts of the state. This original article was repealed and rewritten in 1998 because some of it had become obsolete as a result of US Supreme Court rulings.[1] Originally the governor chose all members of the Alaska Redistricting Board. Our constitution now features a dedicated mechanism for redrawing legislative election districts every ten years (after the census). This politically charged task is assigned to a five member districting board; two members of whom are chosen by the governor, one member by the Senate President, another member by the Speaker of the House and a fifth member by the Chief Justice of the Supreme Court.

Four people pick the five people who determines who you get to vote for according to where you live.

Current members of the Alaska Redistricting Board are: Melanie Bahnke, John Binkley, Nicole Borromeo, Bethany Marcum, and E. Budd Simpson. They had six meetings during 2020 and the meeting videos and
miscellaneous documents relating to their efforts is available at the link in the References. [2]

This is important because how districts are drawn determines whether people we elect really represent the interests of a majority of voters in the district.

Example: A person can be elected to the Alaska Legislature as a Republican in a wealthy part of Anchorage, become a leader in the Senate supporting soft-on-crime legislation while opposing statutory PFD distribution to regular Alaskans—and collude with a Democrat governor whose greatest wish is to sell out Alaska gas to China. When this senator loses her bid for re-election to the Senate, she becomes an antagonist of the majority constituency of her district who voted against her. Two years later, this year, the former Senate President has recently endorsed and become actively involved in re-election campaign of the former governor. We all remember Gov. Bill Walker didn’t dare even try to run for re-election at the end of his failed term, but like a bad penny he is back as a declared candidate for governor. Shamefully, former Sen. Cathy Giessel has come out of the closet as a Democrat enabler since she was no longer able to fool her district constituents in the last election.

Normal people hate those kinds of politicians. I submit that we are witnessing what happens when self-important adults win election as if they were running for high school class president and prom queen. 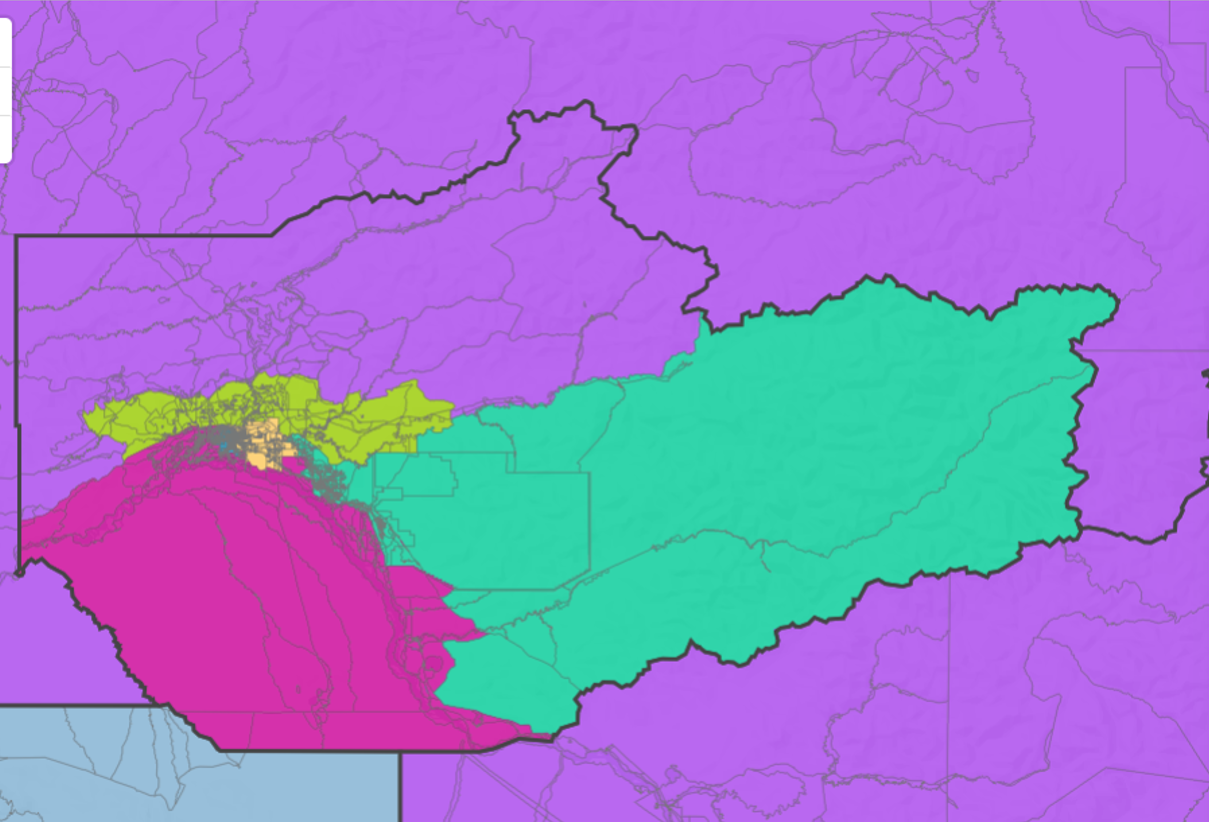 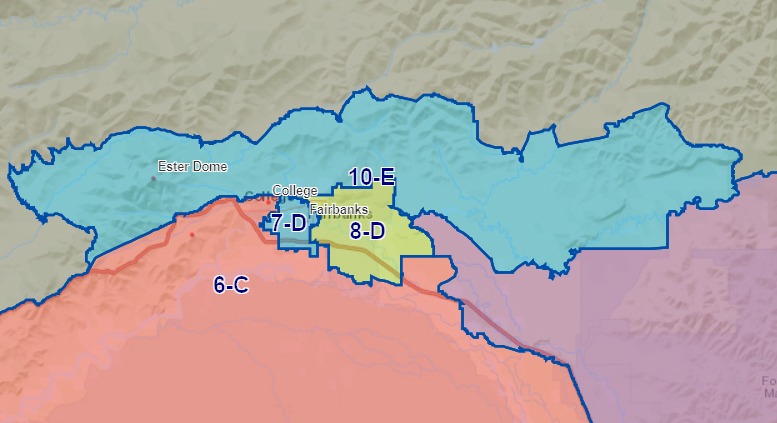 New AFFER Northside District 10 covers the borough from west of Ester to half way to Chena Hots Springs. Simply the neighborhoods north of the other FNSB districts form AFFER District 10.

FNSB population makes up 21.5% of AFFER District 5. When paired with District 6, FNSB has over 60% of a 3rd FNSB senate district.

The AFFER 2021 Map for the FNSB provides full borough representation with 5.215 house districts and 2.61 senate districts.

The redistricting board has a deadline to present a map of the newly proposed election districts: November 10, 2021. Most Alaskans have lives that don’t involve worrying about whether they will be disenfranchised by a board of partisans who draw up a map and manage to get it foisted on us so we can elect Democrats in mostly Republican areas of the state.

We all need to be informed about voter party affiliation in our state, and that information is available from the Alaska Division of Elections.[3]

As of September of this year Alaska had a total of 594,152 total registered voters. Of those 144,249 were registered Republican, 78,946 Democrat, and 18,947 Alaska Independence Party. Eleven political groups allow Alaskans to declare their unique nature but all of them combined total only 11,249 registered voters, of which the Libertarian Group is the largest with 6870. Granted, we have a lot of Alaskan characters but what we know from the data is Republicans outnumber Democrats almost 2:1.

Some might argue: What about Non-Partisan and Undeclared voters? Non-Partisan registrations number
81,258 and Undeclared are 259,603! That’s more than all party affiliated voters combined. To that I say the reality is–as I have learned from looking at Alaska election returns since the early 1970s–those voters break out at the same proportion as Republican/Democrat/Alaska Independent almost every time with some minimum variation. The newly finagled Ranked Choice Voting may be an attempt to suck ignorant voters into selecting the opposite of what most Alaskans want from their elected officials–since it was an initiative driven by Lisa Murkowski’s prior campaign staff—but we don’t know yet. The effort to vilify party affiliation has created a Jungle Primary where we may expect only monkeys and hyenas to run the government in Juneau.

Six redistricting maps are now before the Redistricting Board and a case must be made for what the final map must include.

I would contend that the constitution is extremely clear and the courts have further clarified it, explained Randy Ruedrich, an expert on Alaska Redistricting after having challenged the board’s map in court and won in 2001, resulting in redrawing of 27 of the 40 districts. Ruedrich describes himself as “Resident Antagonist” and has been a keen observer of the process over three cycles. He continued: It’s a straight-forward process to draw a map that complies with the Alaska State Constitution with interpretations from the Alaska Supreme court.

The goal of Ruedrich’s group, Alaskans for Fair and Equitable Redistricting (AFFER) is to build a map with supporting testimony to withstand challenges.

Easy for him to say. Right now there are six maps before the board, two of which the board itself proposed. One map presented by the Democrats was thrown out and a couple of others may be democrat/liberal dreams. The board can adopt any map, parts of any map, or build something completely different. When finished all of the people of Alaska must be accounted for in 40 House Districts, which must be paired to create 20 Senate districts.

There are some maps that simply ignore the law, Ruedrich continued. They may be as questionable as the original 2001 Redistricting Board Proclamation map. There are many things among them that I find highly flawed in terms of what the Alaska constitution requires as interpreted by Alaska Supreme court.

Here’s what the courts care about and how AFFER has met that criterion. Ruedrich has been educating Alaskans and can recite the proposal off the top of his head: A district must be a socio-economically integrated as practically possible.

Back to the Alaska Constitution: Under Article X, Section 3 Boroughs …shall embrace an area and population with common interests to the maximum degree possible…

The court has affirmed that all boroughs meet this test required of election districts, explained Ruedrich. So, if you look at Alaska’s 40 seats, you have 16 of them in Anchorage based on population. You have six seats in the MatSu borough for a total of 22 assigned election districts. There are five plus seats in Fairbanks, bringing the number to 27; three plus on the Kenai brings total to 30; just under two in Juneau, one in Sitka, one in Wrangel-Ketchikan (which are both boroughs), plus the Kodiak Borough brings it to 35.

Looking at the interactive map link at the start of this story, anyone can see how these pieces have been set.

Ruderdich continued: We have three little boroughs in SW Alaska—Lake and Peninsula, Bristol Bay, and East Aleutians—for 36 districts, Northwest Arctic and Arctic Slope form the 37th naturally occurring socially-economically integrated districts, demonstrated by case law and affirmed by the Alaska Supreme Court as having qualifying status. That leaves three seats to be determined, and the formula becomes very simple. One of those three remaining includes the large population of the Bethel Census Area around Bethel in western Alaska. Next is the Bering Straits Census Area—Nome and the villages of the Bering Straits Native Corporation. The 40th district is the Yukon-Koykuk Census Area, which is essentially the predominantly Athabaskan villages in eastern Alaska to the top of the Brooks Range, up around to the upper Kuskokwim-Middle Yukon Rivers.

Let’s talk about the 2-3 things that don’t fit into this category, continued Ruedrich. The largest population block that is not a  borough, and not essentially the nucleus of a native regional corporation, is the Delta/Delta Junction Area. They have population to add somewhere. Then you have the City of Valdez and its census area, which is smaller—they are a city, not a borough—and Cordova, which is smaller yet. Those are the three larger unassigned pieces left over after we have defined the 40, and they must go somewhere.

Additionally, there is the City of Whittier said Ruedrich. Prince William Sound Native Villages—Tatitlek, Cheniga—and throughout Southeast Alaska there are small areas and the Haines Borough, which has borough status that needs to be respected, but it is additive to something. The Denali Borough with separate towns in it is under 1/10th of a house seat. So they must also be an add-on.

As I listen, I can hear in Randy’s voice detailing the easy arguments he has for this configuration of Alaska House Districts, as they might be presented to the Alaska Supreme Court if necessary. Glennallen goes with Palmer, Delta goes toward Fairbanks and every voter is in a district. AFFER is locked and loaded.

The Alaska Redistricting Board shouldn’t want to pick a fight with this guy. This isn’t Ruedrich’s first rodeo and he doesn’t care who loves him.

[3]Alaska Division of Elections Number of Registered Voters by Party Within Precinct, 09/03/2021

Redistricting board adopts six propossals for public c to weigh in on, but takes a pass on map offered by Alaska Democratic Party, Must Read Alaska, September 20, 2021