Rural Alaska in the 1950s–60s–70s was rugged, with community members pulling together to face good times and bad; any individual member or family could need help at any time, and all shared in opportunities. Quality of daily life along the Southcentral rail belt was determined by conditions of nature. Today the community of Willow is thriving, as is Talkeetna, but Curry, north of Talkeetna, is long gone and the very nature of life in these remaining communities has changed.

For myself. during the mid-1960s I lived a few years at a White Alice military installation near the community of Yakutat, a meridian rainforest Native village at Yakutat Bay—which turns the corner to Southeast Alaska. That community had two k-8 schools–one for whites and one for Natives–but no high school.[2] On the Southcentral Alaska Railbelt, in Talkeetna, a little girl was experiencing a different Alaska and today she is conflicted by the changes she has witnessed. 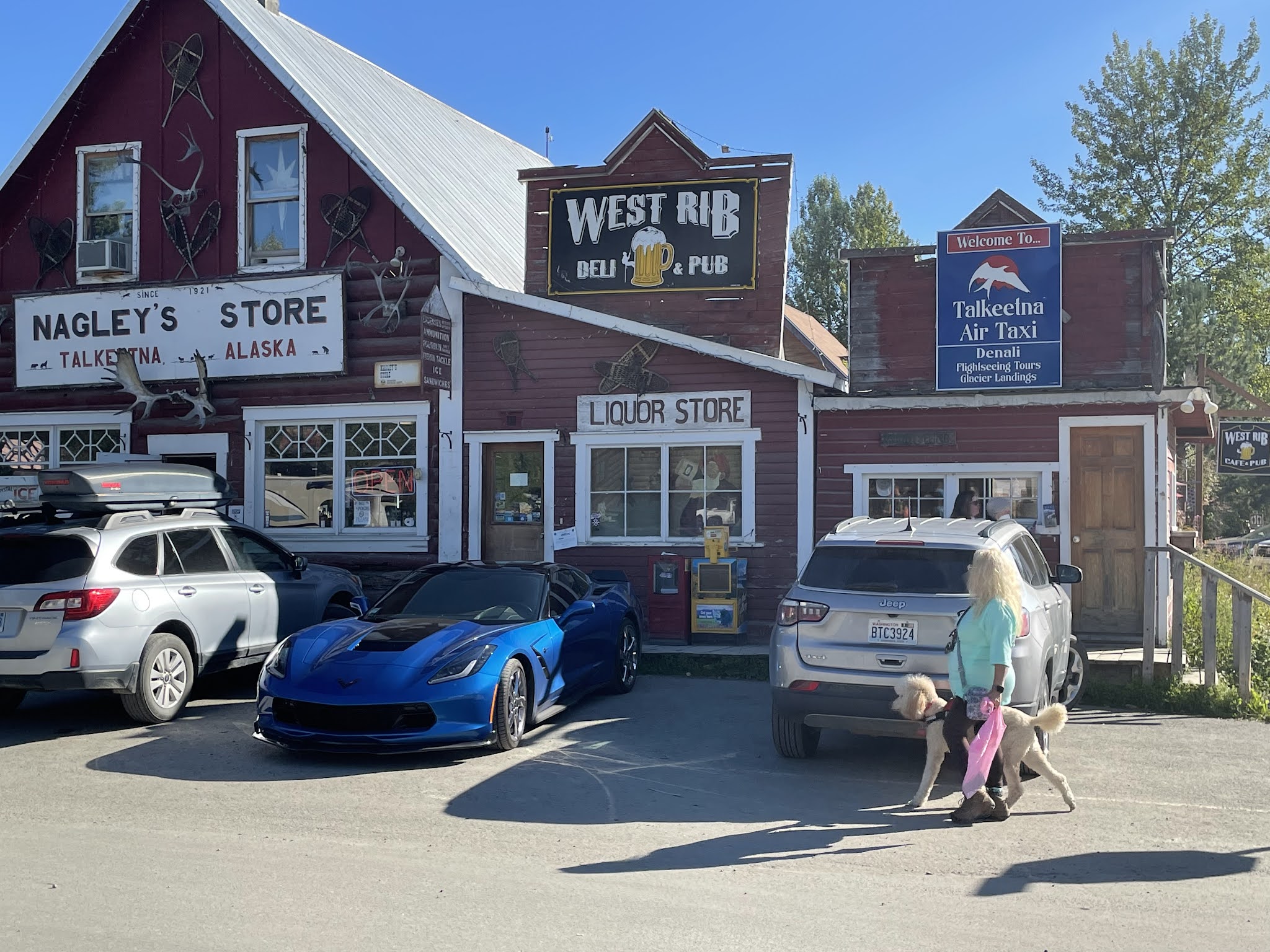 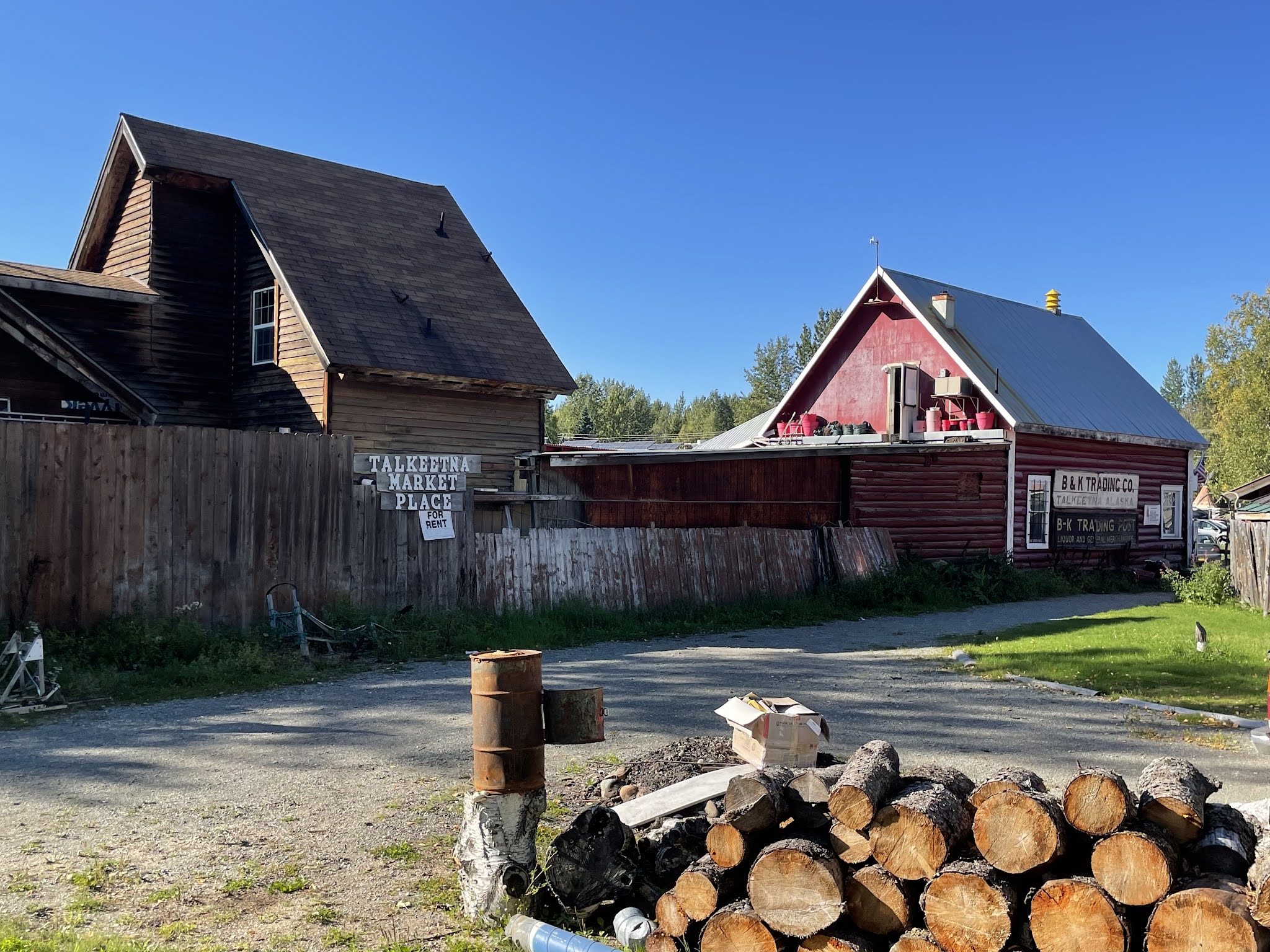 Sheldon Lee explained: My memory goes back to the late 1960s, when what is now Nagley’s Store was the B & K Trading Post.
The B & K grubstaked the miners, trappers and homesteaders in the area. This is something I haven’t seen in decades. Dad would fly the first Denali climbers, and he flew the grubstaked miners and trappers into the area mountains, and the lowlands below the Alaska Range. The B & K would ready supplies for miners and trappers like Rocky Cummins and Jim Beaver, jeep them over to my dad’s airplane, and they were gone for the entire summer—three to four months—after signing for the goods and for the flight cost. Everybody hoped for a productive summer to pay for what they had committed.

Her dad was Don Sheldon; Holly was born at Providence Hospital in Anchorage and at three days old Sheldon flew wife Roberta and their newborn to Talkeetna, where Holly grew up in the lifestyle of rural
Alaska observing people and events through a lens of traditional values.

When the miners, trappers and homesteaders returned from the field, they had furs and gold and what they had grown, continued Sheldon Lee. At the Fairview Inn about the end of September we had a potluck every day. Whole families would come with wares to sell or trade. Anchorage furrier David Green would be here, and I remember as a child: “Oh, there is Mr. Green!” He had a big envelope packed with cash. He would buy furs. Jewelers would come to buy gold at the end of the season. The B & K would be paid for the supplies they had grubstaked. That is very different than what goes on here now.

A walk around downtown Talkeetna this year, in late August, confirmed that statement.

The Fairview Inn has always been a tavern, but it used to also serve as our Community Meeting Place when we were a very small town, Holly continued. The Village Air Strip is across Main Street. That is where my dad’s operation was based. When that air strip was too muddy in the spring, or fall, Dad would taxi the
airplanes down the road to the state airstrip–but mostly he worked off the Village Air Strip.

Holly continued: These are fond memories of the kids from around the territory coming here to the Fairview Inn–and I lived just across
the street–so I got to see everybody and participate in everything. We played, the community had square dances in the street, and it was a big celebration at the end of the summer. Nothing like how packed Main Street is now.

That yellow house is where I grew up, continued Sheldon. What is now a large art gallery next door is where my dad used to keep his planes. I attended the last first grade class in the little red schoolhouse on the other side of the yellow house. When my dad would land and fuel up the planes, I got permission to go help my dad during the school day. I would bring friends with me.

Turning to the other side of the street, Holly pointed out: This used to be the gas station I worked at, Union76. It is Denali Brewpub now. Rose and Gene Jenne operated it as a gas and service station for decades. 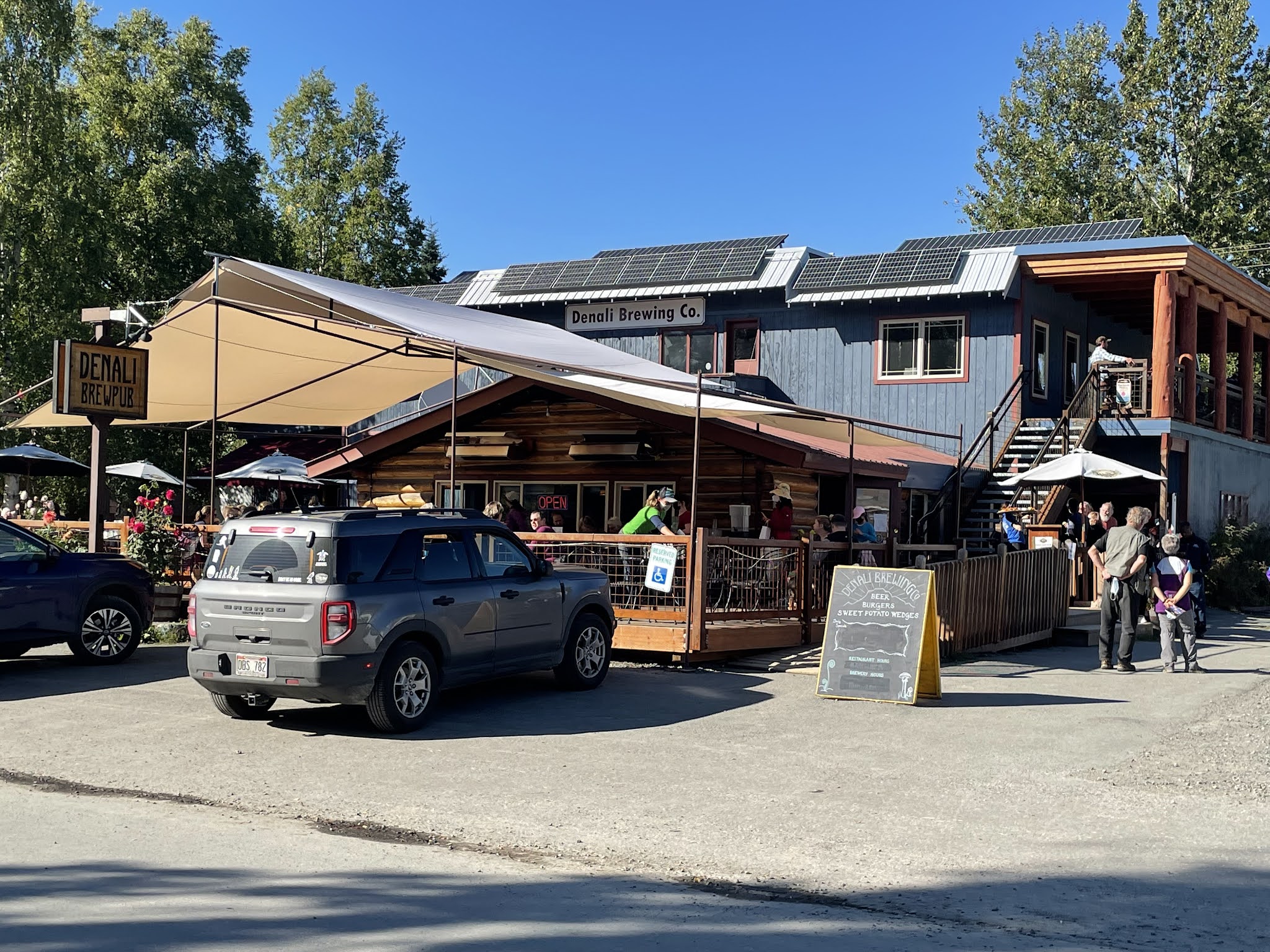 Talkeetna stays open all winter but a lot of the tourist businesses close. Coronavirus has also impacted business operations, including the Talkeetna Roadhouse, which this writer has previously written about.[3]

Another sign of the times is a Cannabis shop in the cabin built by Legendary Denali climber Ray Genet. Previously it was a chocolate shop prior to being purchased by an Outside interest to make it a pot shop.

A posting on another blog enthuses about how cleaver and really cool this pot shop is. You know, dude? In all it’s delusion, the story also accidently states one undeniable fact about Genet:

For those who don’t know, Ray Genet is a legend. He was a Swiss-born Mountaineer and Guide best known for his pioneering efforts on Denali, the tallest mountain in North America.[4]

Holly was part of the effort to have this cannabis shop located in a different part of town instead of in the heart of the community on Main Street. She and others opposed it being 66-feet from a camper park, and 126-feet from the Talkeetna NPS Ranger Station where children’s programs were offered before this business was placed here. Political power of the Mat-Su Borough Marijuana Cartel has allowed it. She is further affronted by advertising for air taxi services in front of a cannabis dispensary.

Holly resents use of Genet’s picture on the signage of the pot shop: He was a clean, sober man. He was a Teetotaler. What is happening now with legalized marijuana is something none of the men of that generation would have allowed in the heart ofTalkeetna, she said. They might not have cared about it on the periphery but not as a predominant feature of our community.

Holly should know what Genet would have allowed. An account of a 1970 climb is on the Sheldon Air Service website.[5]

This red hanger was my dad’s hanger, said Holly. My mom gave it to the town, It was moved back and another story built under it for community events.

Sheldon continued: The hanger and my dad’s warehouse and some other outbuildings actually came from Curry. They had a fancy dining hall there, and you can still find chips of fine china and crystal glassware
fragments. When Curry ceased to exist my dad went up there and purchased several buildings–trading flight services–and they took the buildings down and moved the parts by railroad to Talkeetna. The buildings were reconstructed here for his business.

Leaving downtown Takeetna, we travel to the far end of the Village Airstrip.

Here we are now at the confluence of the Talkeetna, Susitna and Chuitna Rivers, explains Sheldon. From here it creates the Big Su River. This is a sight to see in the summertime; the river now is silty from glacier melt off, but in the spring and after the melt out happens–and in the fall before winter sets in– it becomes pristine blue and green before the ice of winter.

We used to come down here to pick the cottonwood tips in the summer and there is plantain here too, continued Sheldon Lee. It used to be a longer strip, but they built a parking lot because that is what they have to do now, leaving a much smaller place for planes to land.

We cross the Alaska Railroad tracks and head back to Sheldon Air Service, where Holly’s Husband, David Lee, is doing what pilots do in fixed based operations stations all around the state after a day of providing services—drinking coffee and talking to customers and visitors. 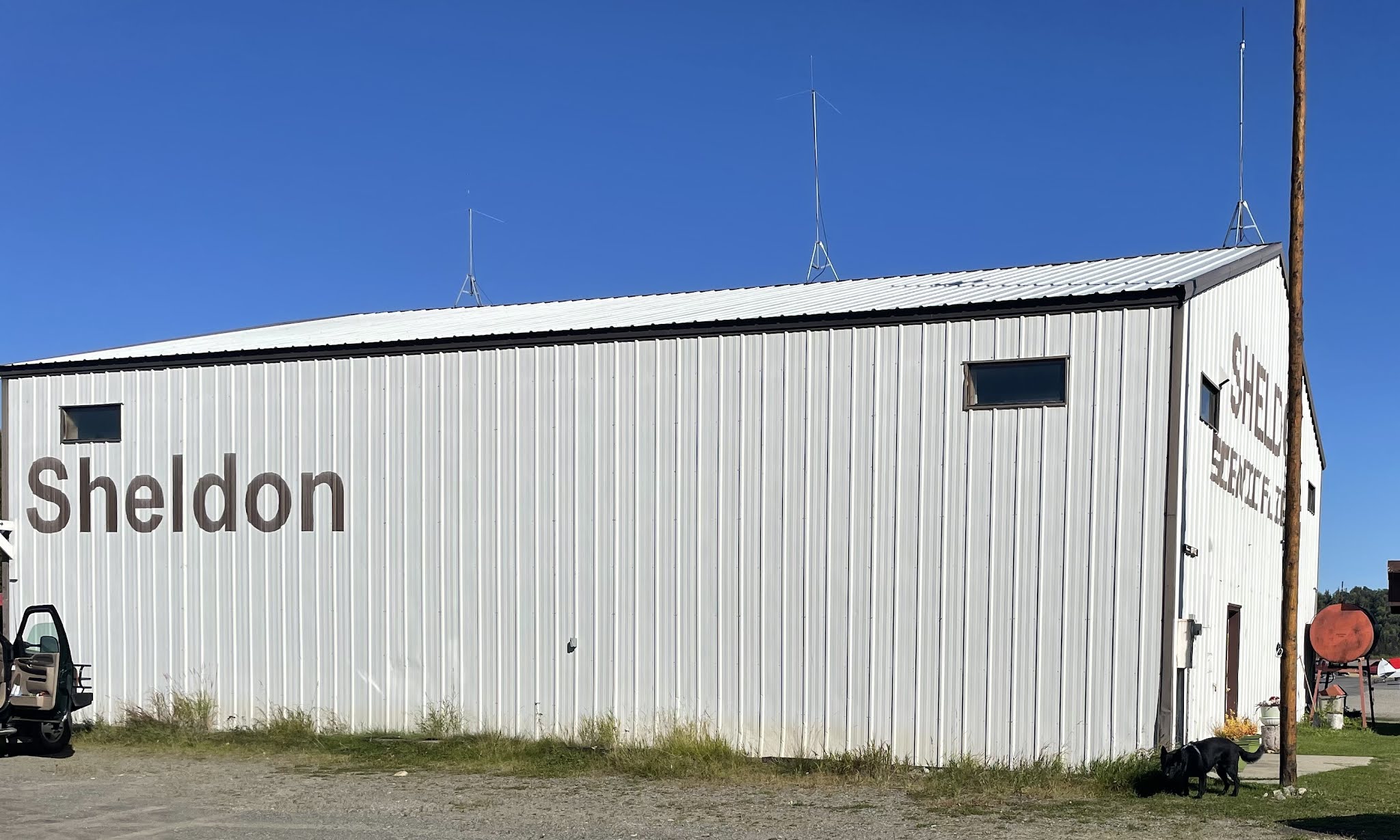 I came up here at about 14 years old, explained David Lee. I had come home from school one day and they were building this hanger over here, they had a pile of plywood there and said: “Hey kid, help us load this plywood.”

So, I started working there on weekends to build that hanger, continued Lee. And I became a ramp rat, you know, sweeping floors and washing planes. Soon I started getting instruction, and I focused on my private pilot’s license. By 1980 I was a commercial pilot, and we did a few scenic flights of Denali with a Cessna 206 on wheels. That started it.

Did you have to learn some things the hard way?

Yes. Back then there was no training program, Lee responded. The guy I worked for told me: Do you see that fork out there? Well, there’s a notch in the mountain when you get there. You need to fly through there and on your right is a glacier, watch out and you’ll see some tracks…I started out on nice days when everything was calm and eventually started going up there when the weather wasn’t so good, It was a steep learning curve.

How has the business changed?

I made three tourism flights to Denali today, Lee responded, but in the past I might fly as many as 7-8 flights to the mountain. We had a 14-hour duty period and I remember having to get back to stay within the legal limits. We also had other pilots working for us.

Today Sheldon Air Service has its niche, with deep roots in the community of Talkeetna. Covid has impacted this business greatly but obviously some changes have been easier to accept than others.