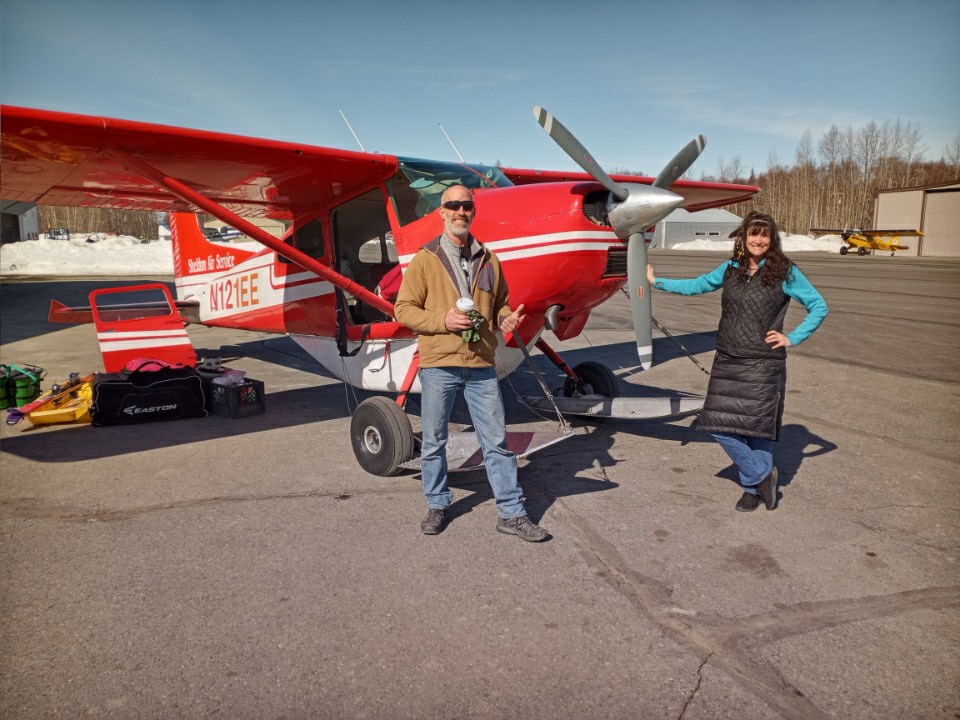 Spring Denali climbers are arriving in Talkeetna now, to be flown to the basecamp, where they will begin their torturous assent to the highest mountain in North America. Holly Sheldon-Lee is again busy managing a business that goes back to her father, pioneer Wager with the Wind pilot Don Sheldon. He established the business flying Piper Cubs with great precision and made the business successful with his renowned skill
and determination.[1]

“That Cub has 72 patches but it still passes annuals,” laughed Sheldon-Lee. 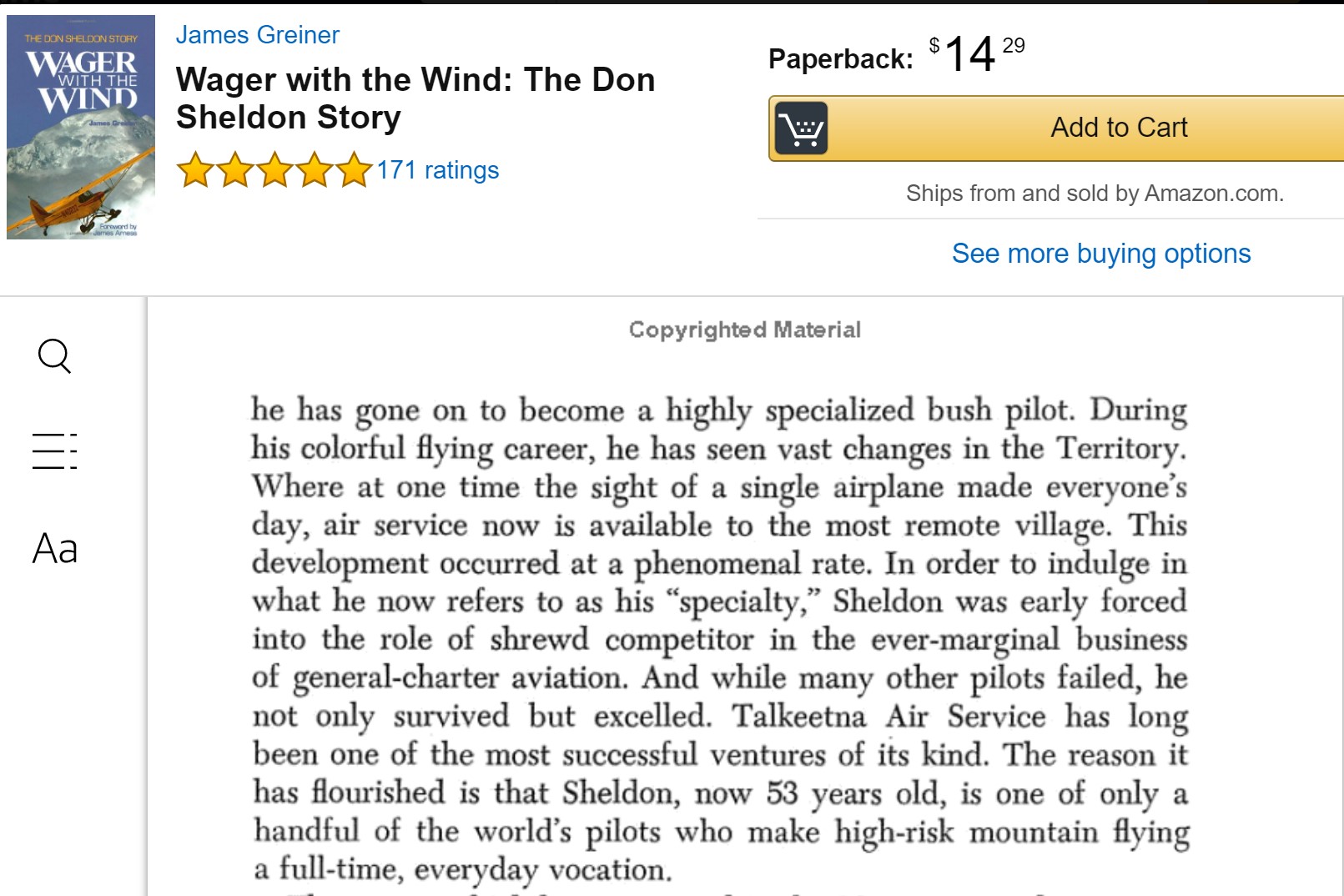 Fast-forward to today: The Covid-19 pandemic of the last year has been very difficult for Talkeetna Air Service, and during that time the Alaska Election of 2020 has been a source of alarm for Sheldon Lee and others, who think something fishy is going on. I was able to interview Sheldon-Lee during this busy time for this story.

These Matanuska Valley Alaskans don’t trust using machines to count ballots and don’t think the State of Alaska should be using anything but paper ballots. They want their Matanuska elected officials to do something about it. A previous DONN LISTON COMPANY posting explains why: https://donnliston.co/2021/03/alaska-election-questions.html

To make the point, they established an Alaska Election Reform group prior to Covid, and on February 11, 2020 established some expectations for the coming elections. Primarily, the group produced an Executive Order it wanted Gov. Michael Dunleavy to implement and pushed for an elections meeting to talk to both Gov. Dunleavy and Lt. Gov. Kevin Meyer about concerns regarding election machines the State of Alaska was about to purchase.[2] Mostly they wanted the option of a hand-count of ballots in addition to any machine count. During the first quarter of 2020 they asked for an audit of State voter rolls. In the second quarter they conducted Teleconferences and built camaraderie to promote election integrity.  In the fourth quarter they aspired to promote voting, carpooling to voting, watching election polls and the count, including escort of paper ballots to headquarters. This was a serious coordinated effort.

Ultimately the State used voting machines anyway. The election reform group doesn’t trust the results of the election because of the machines.

But before the election, on March 6, 2020, the 2020 Alaska Election Integrity group met with Gov. Dunleavy and Lt. Gov. Meyer. They presented information by IT professional Brian Endle on Voting Machine Corruptibility.[3] Jim Pazsint testified on personal experience in 2014 of election corruptibility.[4] Mike Alexander spoke on courage. Loy Thurman explained why a hand count was necessary in the coming election, and Ms. Sheldon Lee presented the proposed Executive Order the group wanted Gov Dunleavy to sign.

On August 17, 2020, Lt. Gov. Meyer responded to concerns in a way that was not clear and convincing to Sheldon Lee, and her Mat-Su Conservative Coalition.[6]

On September 2, 2020 Lt. Gov. Meyer reiterated his requirement to follow state election law and referenced the need for election reform through the Alaska Legislature, to which he would be submitting legislation for consideration.

Following the election using the machines Mat-Su Valley activists raised a chorus of concerns. These concerns were articulated in a November 17, 2020 memo to Lt. Gov. Meyer from Alaska Independent Party Chairman and talk radio host Robert Bird. In an email from Bird a number of circumstantial examples are listed, but “first and foremost, the shocking and dismaying revelation that Alaska is using the Dominion voting machines” is listed as a reason to question the integrity of Alaska’s 2020 election before certification.[8]

Of course, after some various election challenges, the 2020 election WAS certified.

Leading the effort in the legislature to assure Alaska election integrity is Sen.Mike Showers’ SB 39, An Act relating to elections… It is currently in State Affairs and must go to Judiciary next.

From the Sponsor Statement: Senate Bill 39, updates Alaska’s decades-old election statutes, strengthening voter access and improving integrity so Alaskans may regain confidence in our election system. We sometimes disagree with election results, but rarely in our history have we refused to accept them. A troubling trend has emerged where entire segments of our nation not only disagree with election results but refuse to acknowledge them as legitimate. It happened in 2016, and again in 2020. Whether these concerns are real or perceived, we must find a way to restore all people’s faith in our election system as it is a cornerstone to our Constitutional Republic.

The rest of the explanation can be found here: http://www.akleg.gov/basis/get_documents.asp?session=32&docid=14743

Description of other introduced legislation relating to the 2020 Alaska Election is documented in this previous DONN LISTON COMPANY story: https://donnliston.co/2021/04/what-if-alaskas-election-was-hacked.html

After discovery of the Prudhoe Bay oil bonanza, the U.S. Congress was able to pass the Alaska Native Claims Settlement Act of December 31, 1971, and environmental extremists began to organize against construction of the proposed 800-mile Trans-Alaska Pipeline. Two bumper stickers were seen frequently on cars around the state. One said “Let the Bastards Freeze in the Dark!” and the second said “We don’t give a Damn how they do it Outside!” That Alaskan sentiment seems to have been lost over the decades since.

People on their Alaskan Adventures have come and gone.

In a defamation lawsuit filed Outside against FOX News Networks, LLC and various other individuals, following the election, attorneys for Dominion Voting describe the company and the nature of it’s complaint against FOX News. [9] 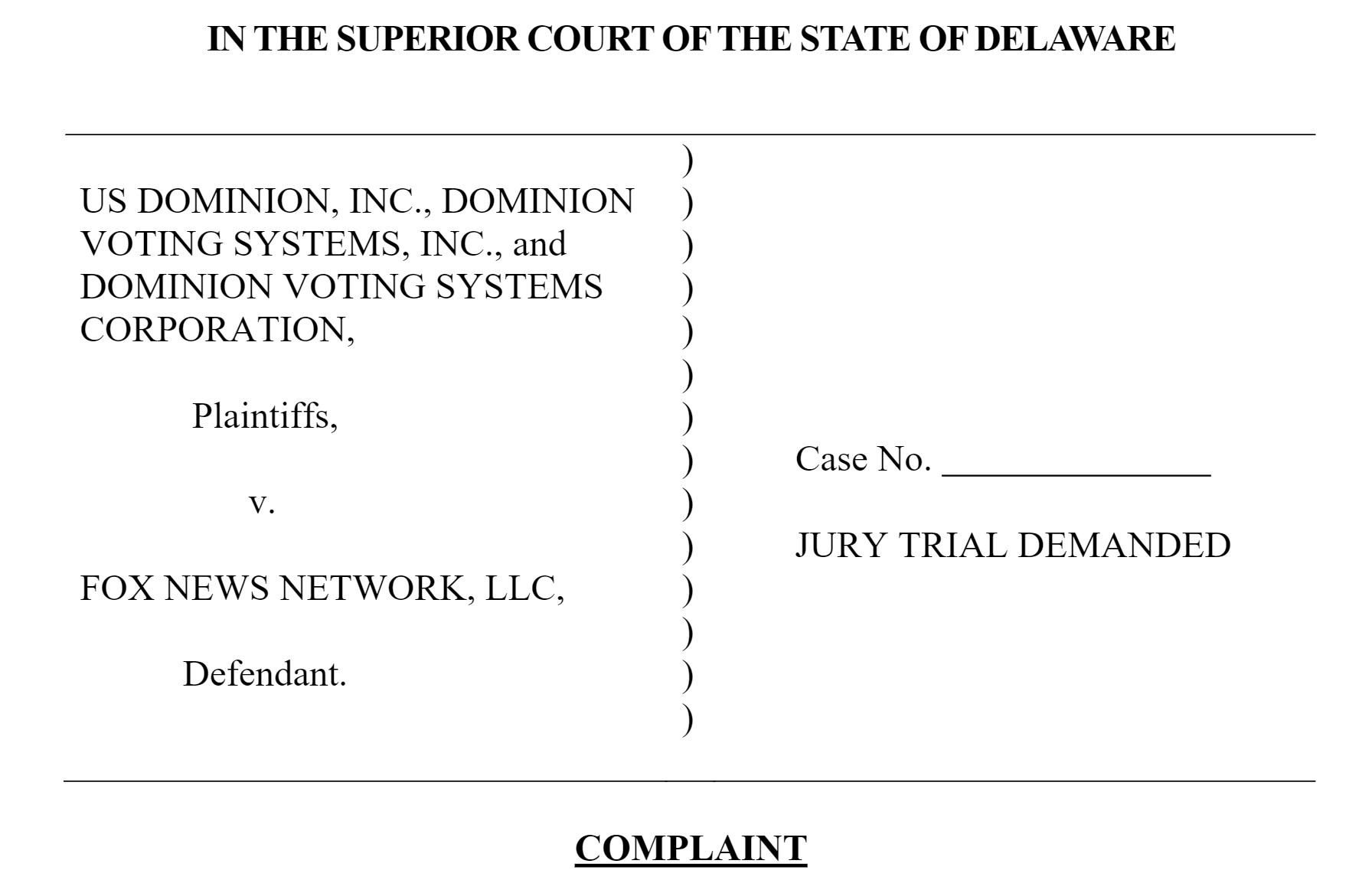 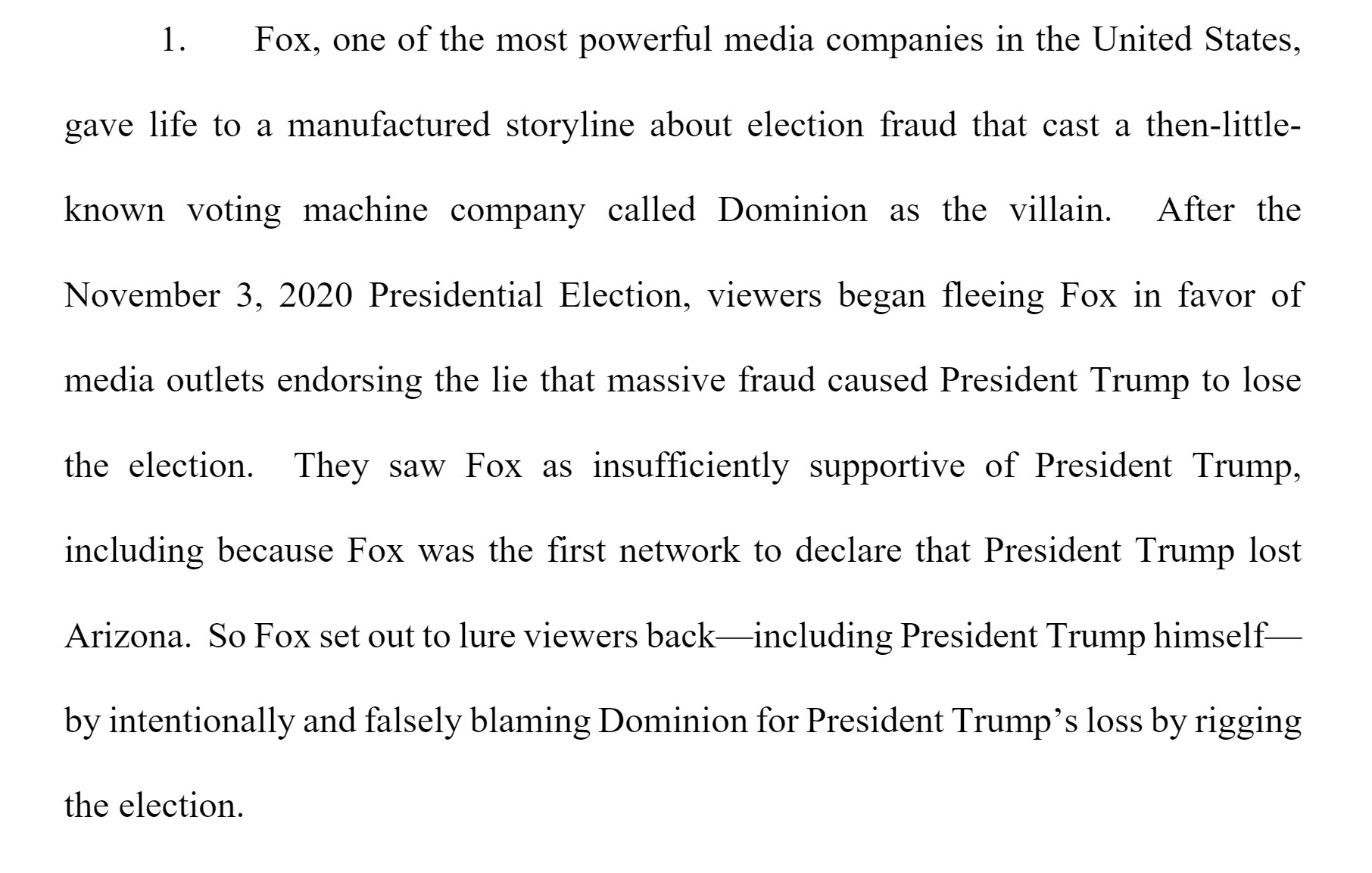 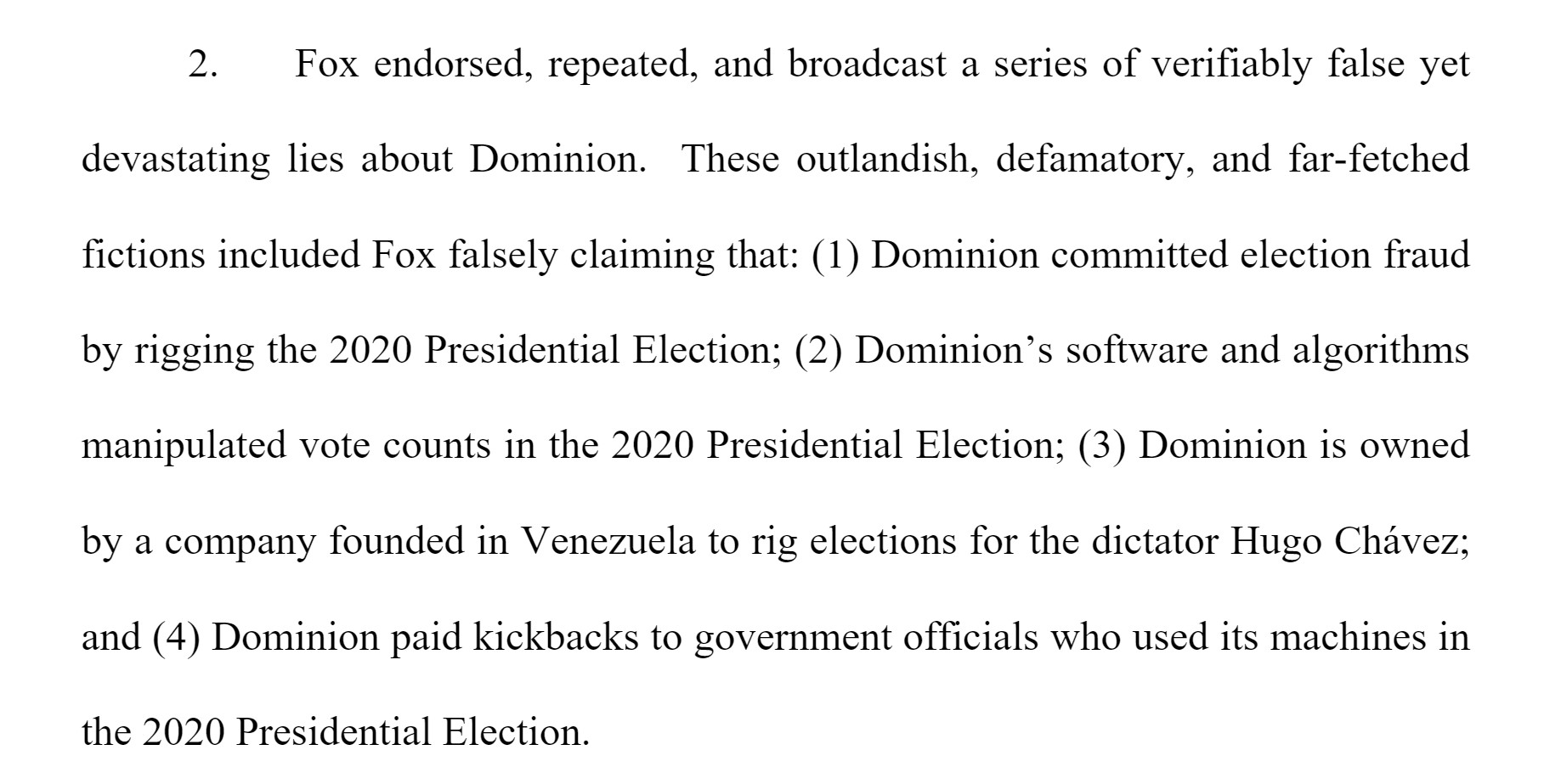 The bar for proving defamation is high for news agencies protected under the constitution. Any case must prove not only that defamation occurred but that it was done with intent and malice. In this suit Plaintiffs allege that circumstances established above prove Fox News knew the statements were false and did what it did for ratings.

Further, the legal brief states: Yet even after Fox was put on specific written notice of the facts, it stuck to the inherently improbable and demonstrably false preconceived narrative and continued broadcasting the lies of facially unreliable sources—which were embraced by Fox’s own on-air personalities—because the lies were good for Fox’s business.

The Dominion Company is described as follows: Dominion is a voting machine company that was founded in 2002 in John Poulos’s basement. Poulos’s objective of accurate, transparent, and accessible elections motivated mim to create Dominion. He went on to build what was, until recently, one of the fastest-growing technology companies in North America. While Dominion was known within the voting machine industry and supplied machines in 28 states, it was little known to the public at large.

Statement of the Complaint basis concludes with the following: 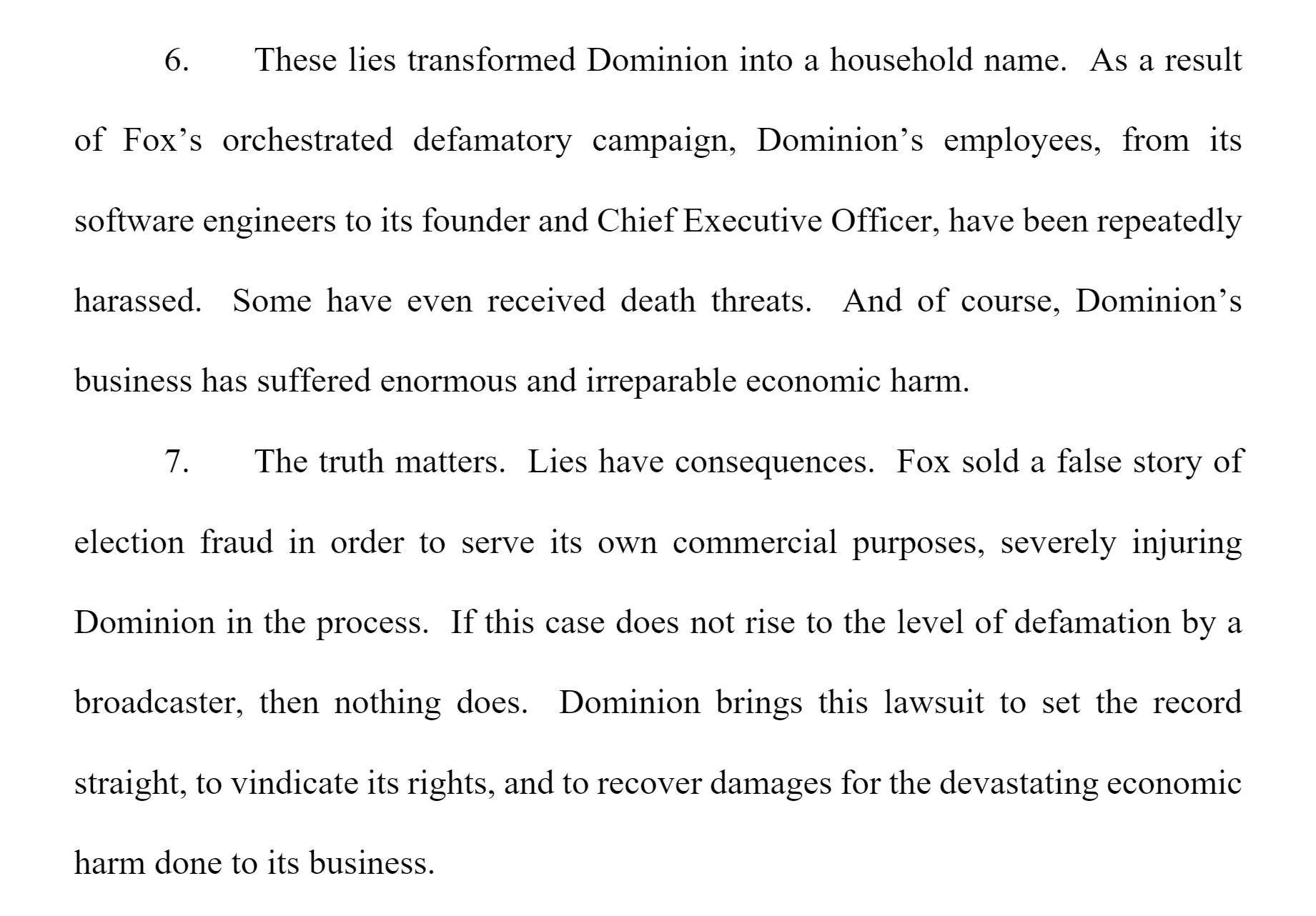 The suit establishes that Fox has been the leading news source in the US for 19 years and alleges the company did not inform its audience of the plausibility of a loss for businessman President Trump given  certain political dynamics in the country with Covid-19. 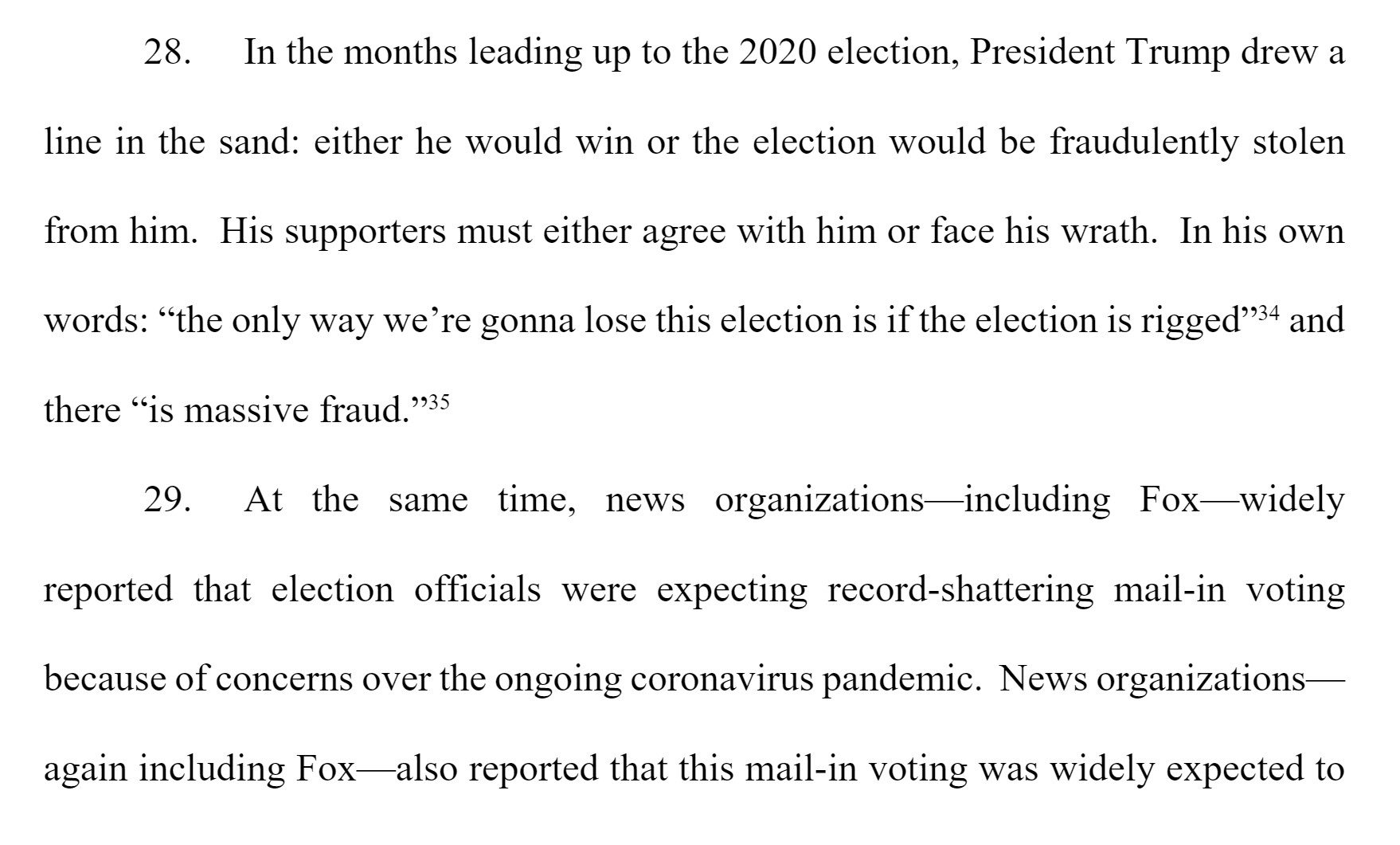 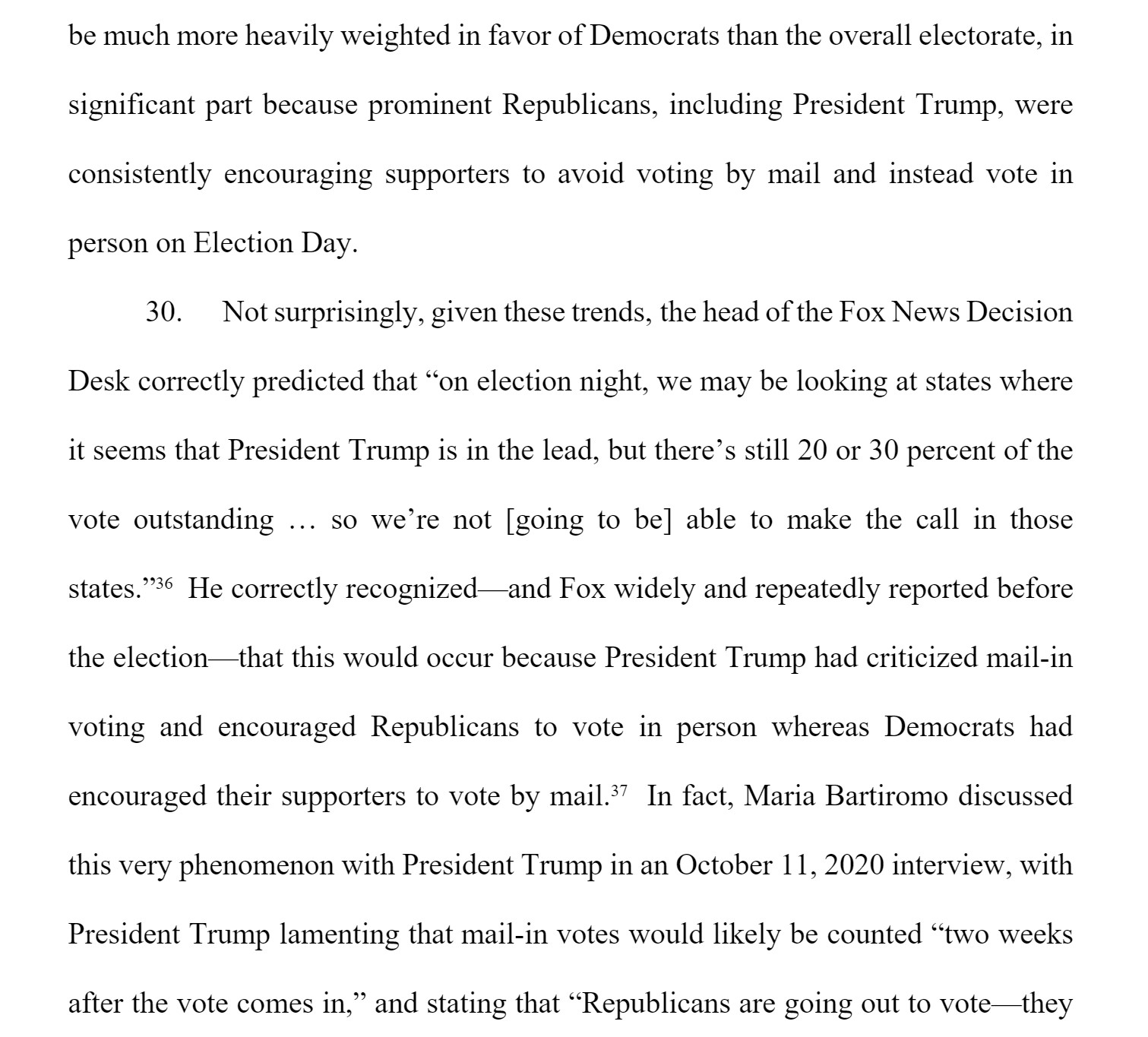 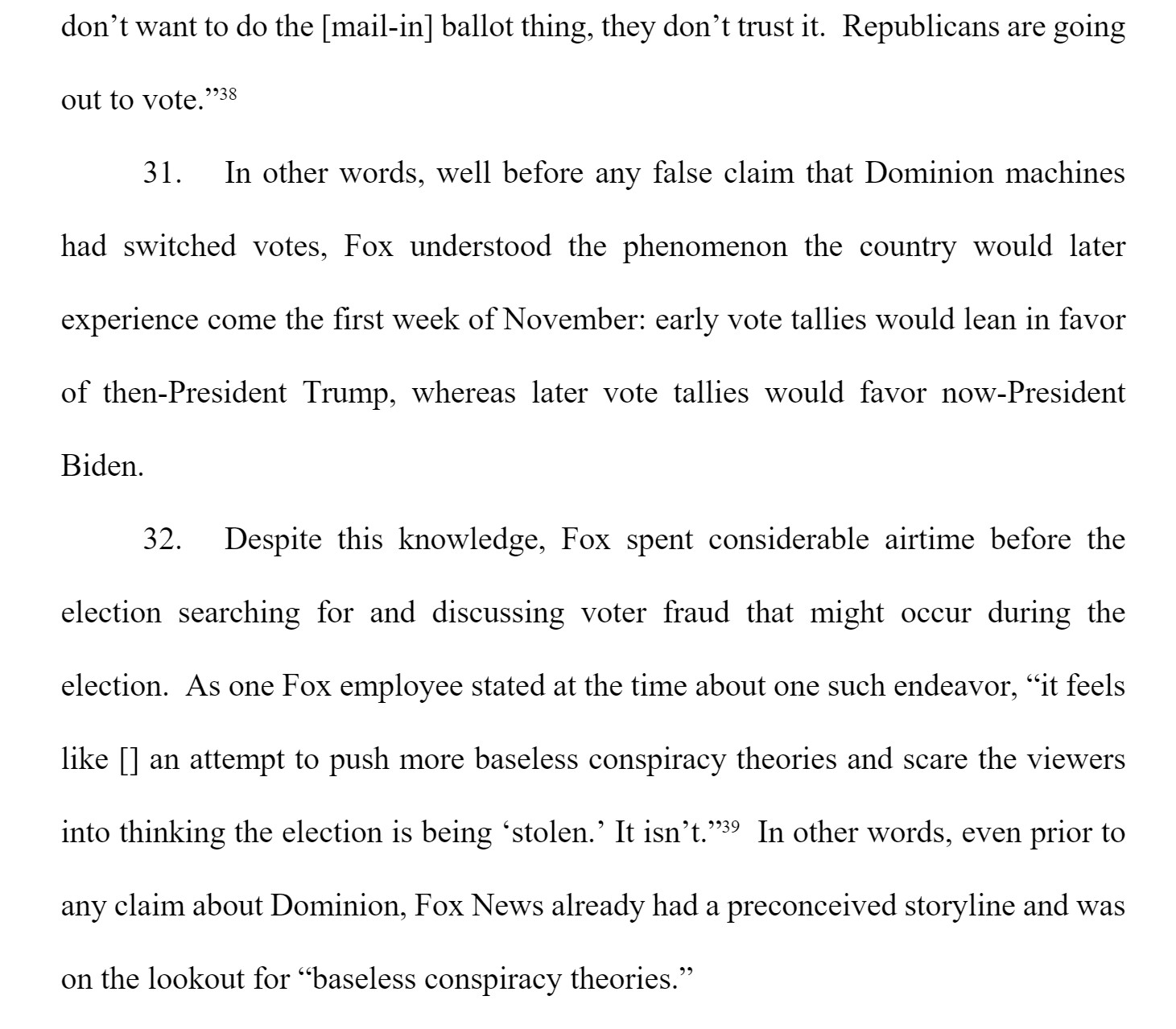 These arguments are now in the courts and will either be settled between the parties or will go to trial. States that use Dominion machines, including Alaska will be impacted.

One of my favorite conservative blogs, American Thinker has posted stories alleging Dominion machine vote manipulation–and a retraction and an apology–for publishing false claims against Dominion. I read those stories and believed them at the time. 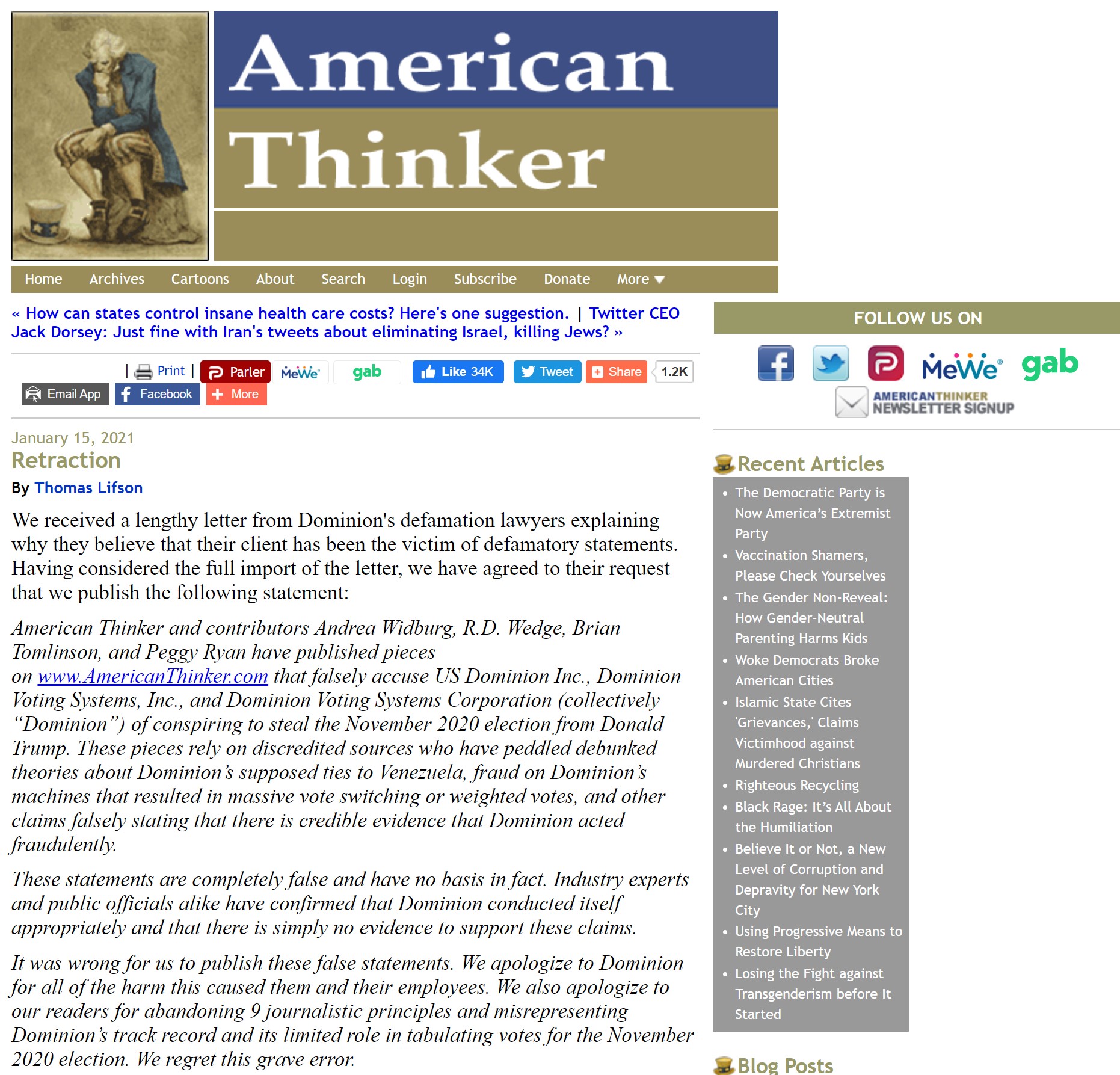 All Politics is Local

In his book Man of the House, former Speaker of the U.S. House of representatives Thomas P. “Tip” O’Neill, Jr. explains how he learned this political truism in his first campaign for public office, after he lost.

From the book: This was the only race I ever lost in my life, but in the process I learned two extremely valuable lessons. During the campaign, my father had left me to my own devices, but when it was over, he pointed out that I had taken my own neighborhood for granted. He was right: I had received a tremendous vote in the other sections of the city, but I hadn’t worked hard enough in my own backyard. “Let me tell you something I learned years ago,” he said. “All politics is local. [10]

For Alaskans our state and local politics can be downright absurd. Many Alaskans were disappointed in the 2020 Alaska election given inconsistency of voting patterns, but we know Trump won and Biden lost here. There may be some aspect of the use of voting machines that allows corruption to
happen, but the Dominion lawsuit will likely determine if true corruption occurred–or promoting the election fraud narrative at the national level was just a business decision for Fox News. I hope Alaska election reform may be possible but have a low expectation for elected officials to seriously consider changing a system that elected them to go to backwater Juneau to make laws in a place closer to Seattle than to the population centers of Alaska.

My latest conversation with staff to Sen. Showers is hopeful that election reform might be possible. One possibility–which Democrats reject–is the security platform known as Blockchain, which was developed to guaranty security for Bitcoin exchanges.

In its most basic form, blockchain is a digital ledger. The technology draws its power from the peers—or nodes—on its network to verify, process, and record all transactions across the system. This ledger is never stored, but rather exists on the “chain” supported by millions of nodes simultaneously. Thanks to encryption and decentralization, blockchain’s database of transactions is incorruptible, and each record is easily
verifiable. The network cannot be taken down or influenced by a single party because it doesn’t exist in one place.[10]

As it stands now, a person can apply on line, get a ballot emailed to wherever, and they vote absentee in Alaska. With all the hacked data, there is NO firewall to verify they are who they say they are, because the identifiers were stolen.

Sheldon-Lee has sounded the alarm and is organizing among long-time Alaskans to address concerns about voting systems. The pandemic has opened up new ways to harvest ballots for selection of elected officials, while many businesses are struggling to stay alive. Election reform at its most basic level could be cleaning up voter rolls, using paper ballots so only valid voters cast ballots, or installing a Blockchain system. Perhaps this is possible but in the meantime state spending continues unabated and the next excuse for not changing a broken system will be costs.

Future generations will pay the Piper, and it won’t be a Cub. 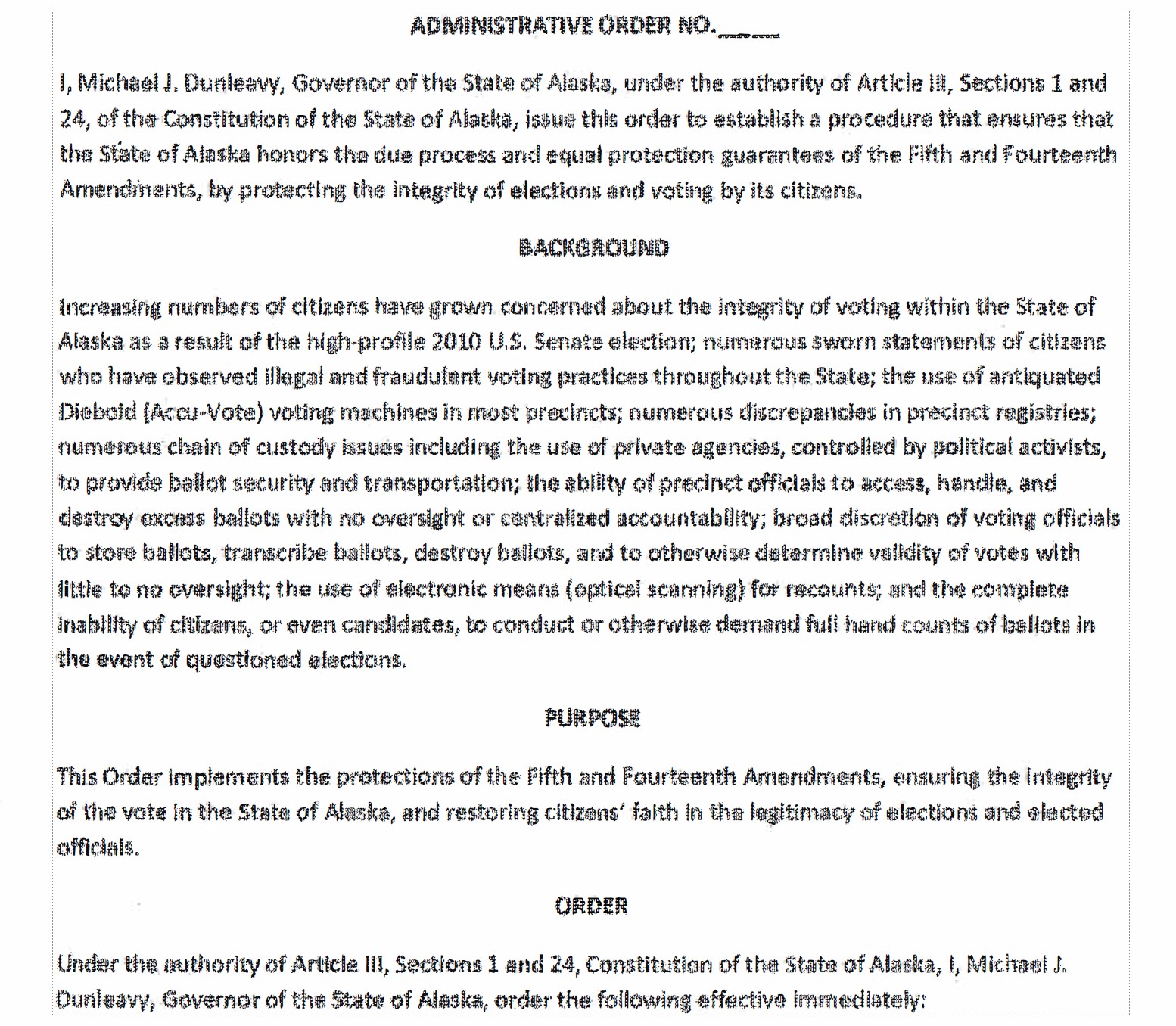 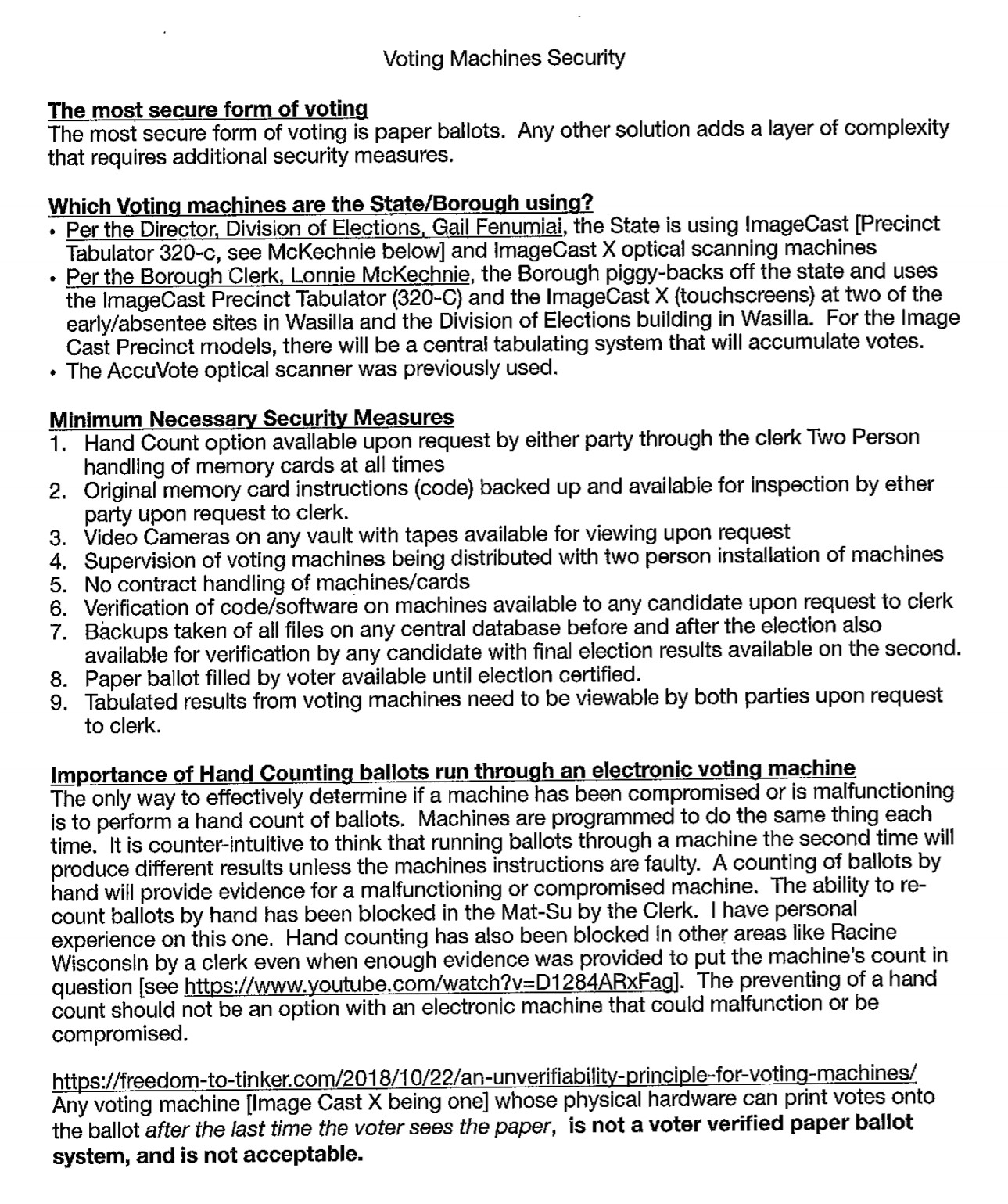 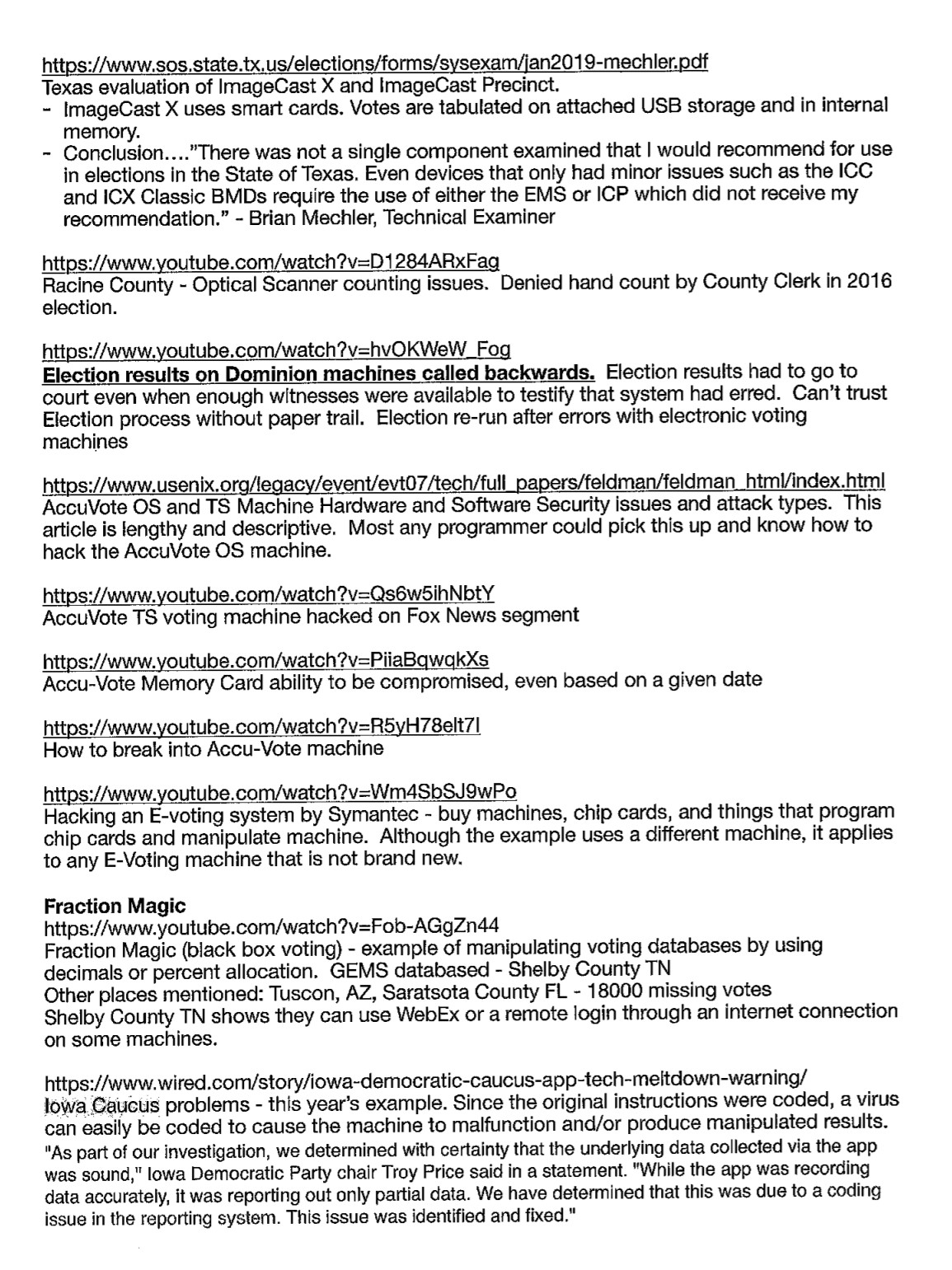 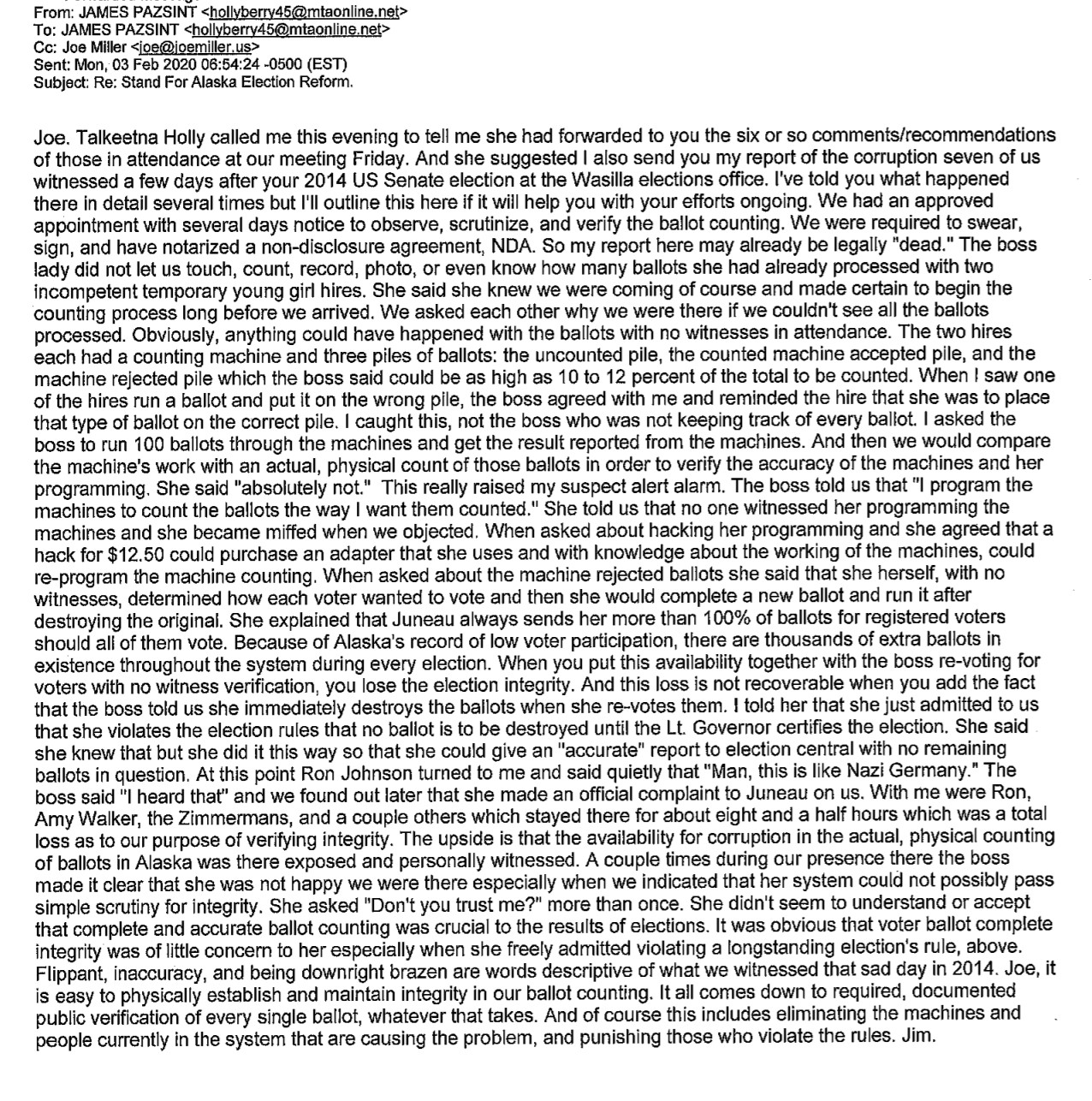 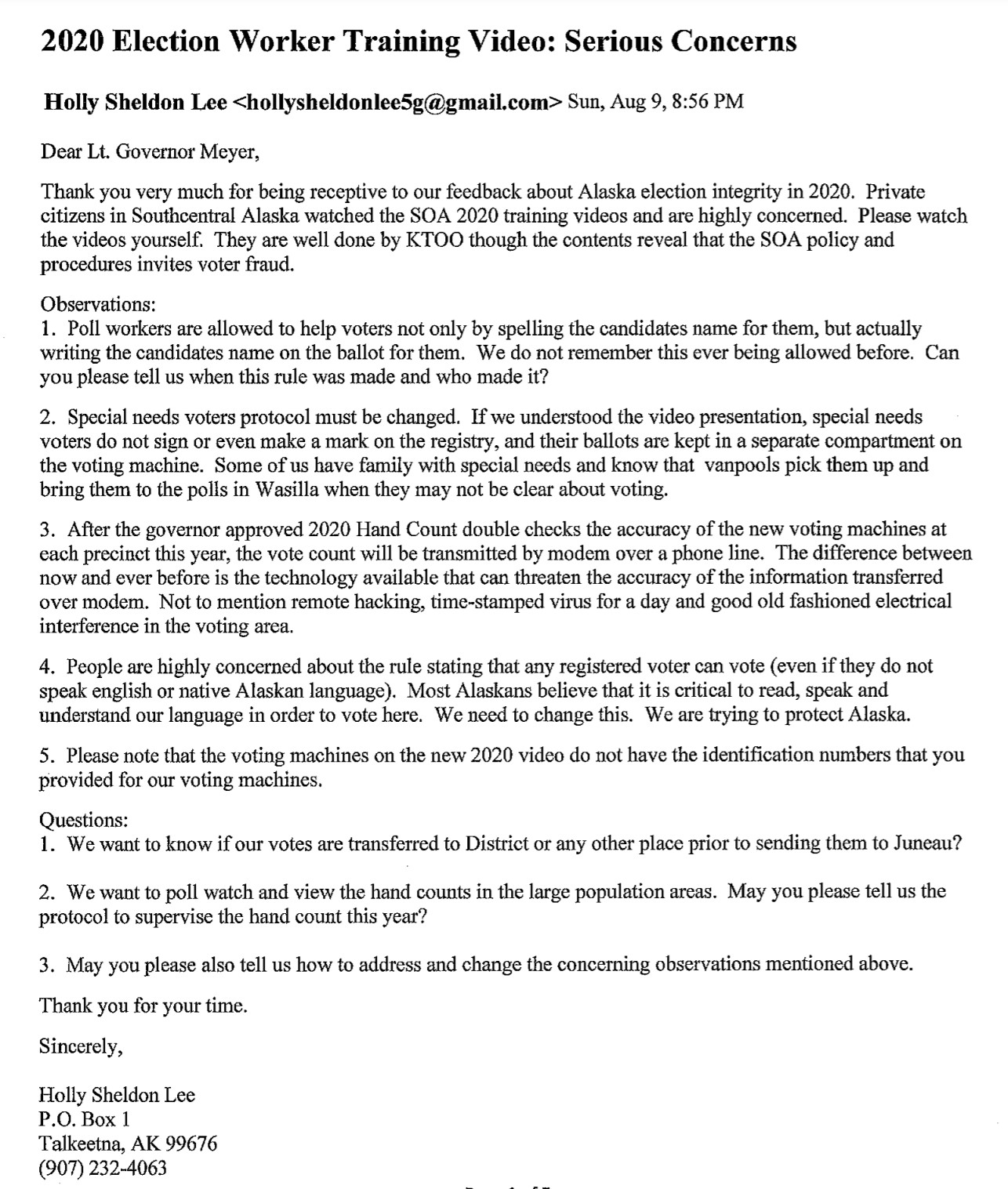 [6] Response to Sheldon inquiry from Lt. Gov. Meyer and reiteration of expectations from Sheldon 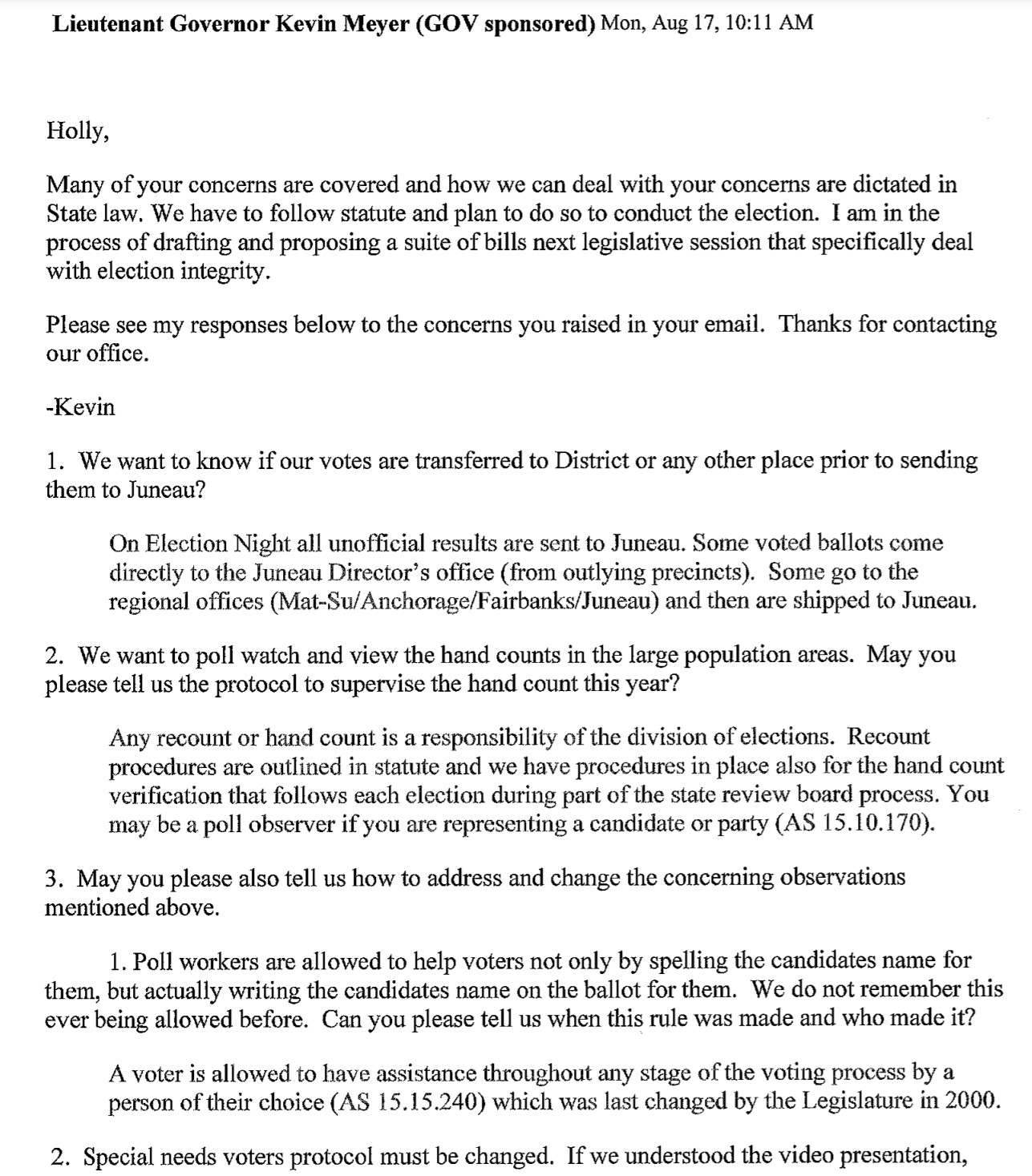 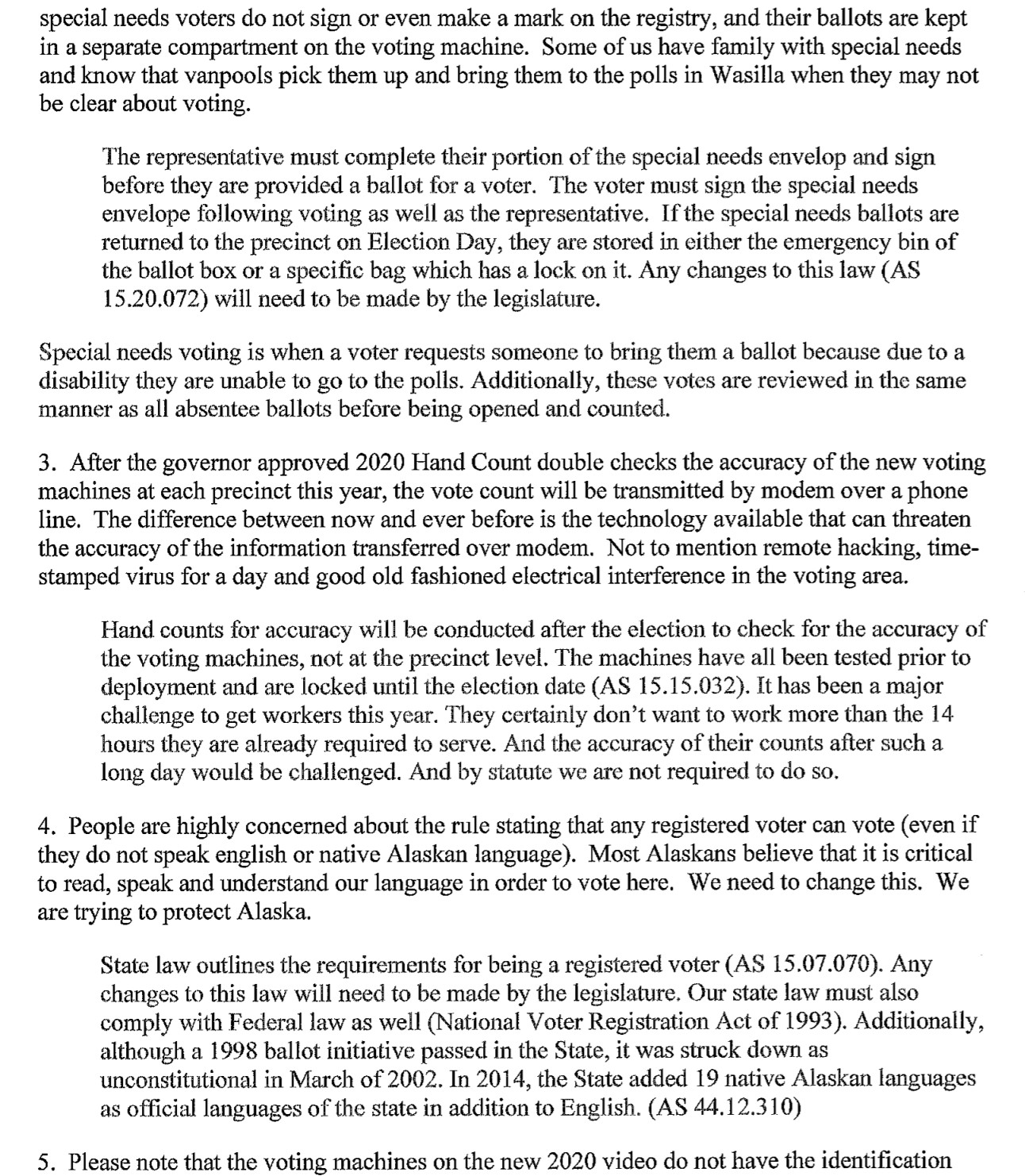 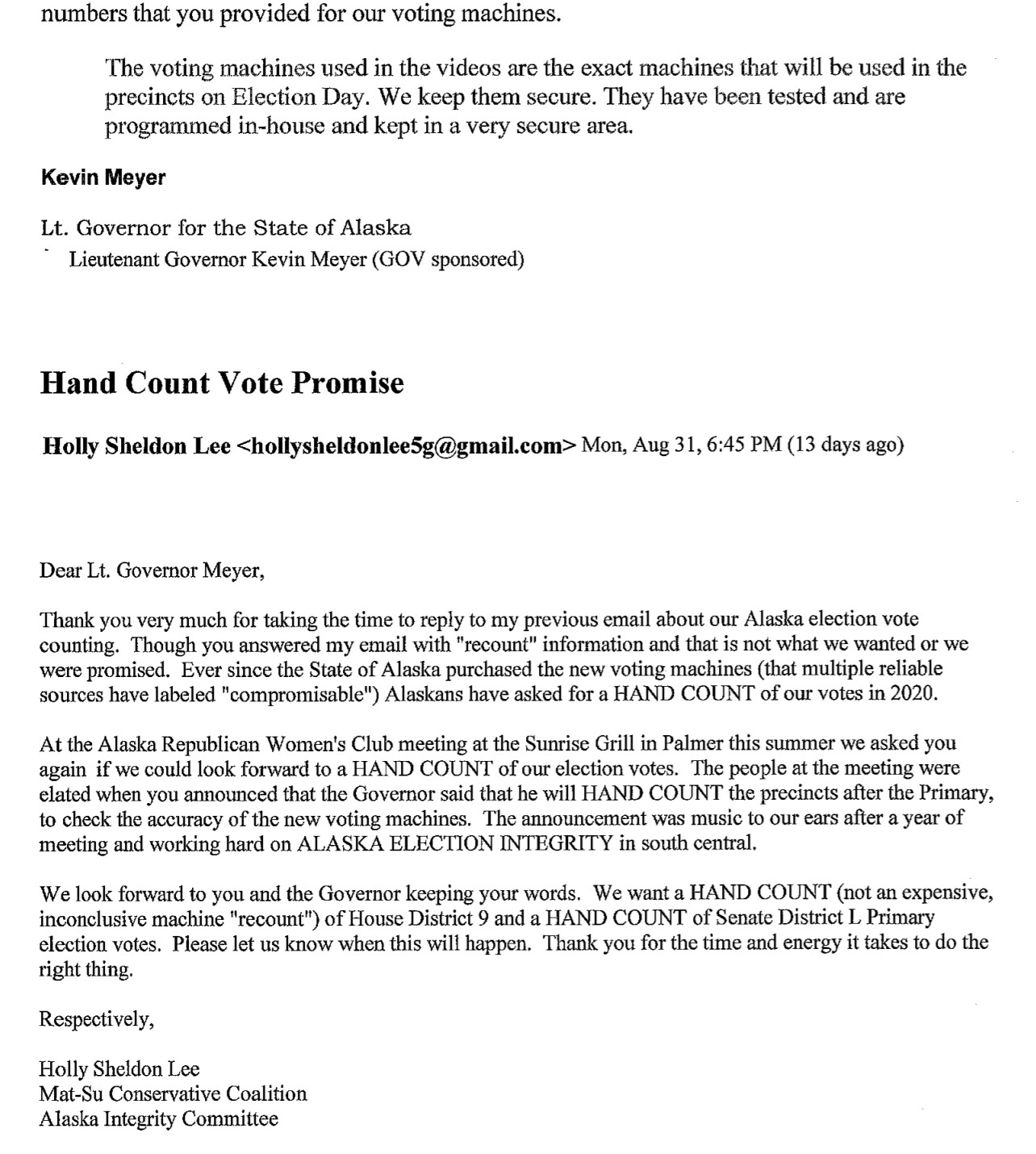 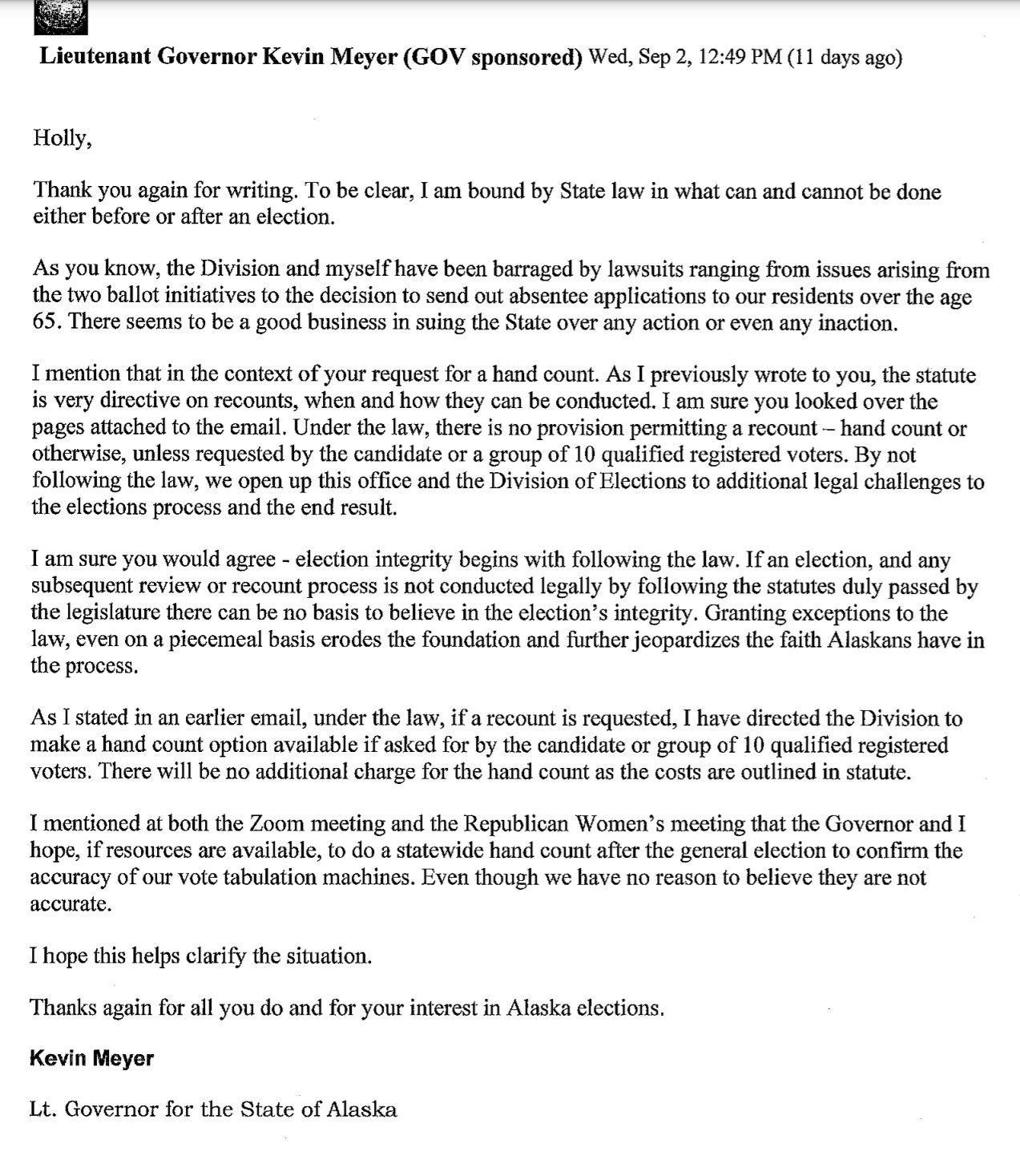 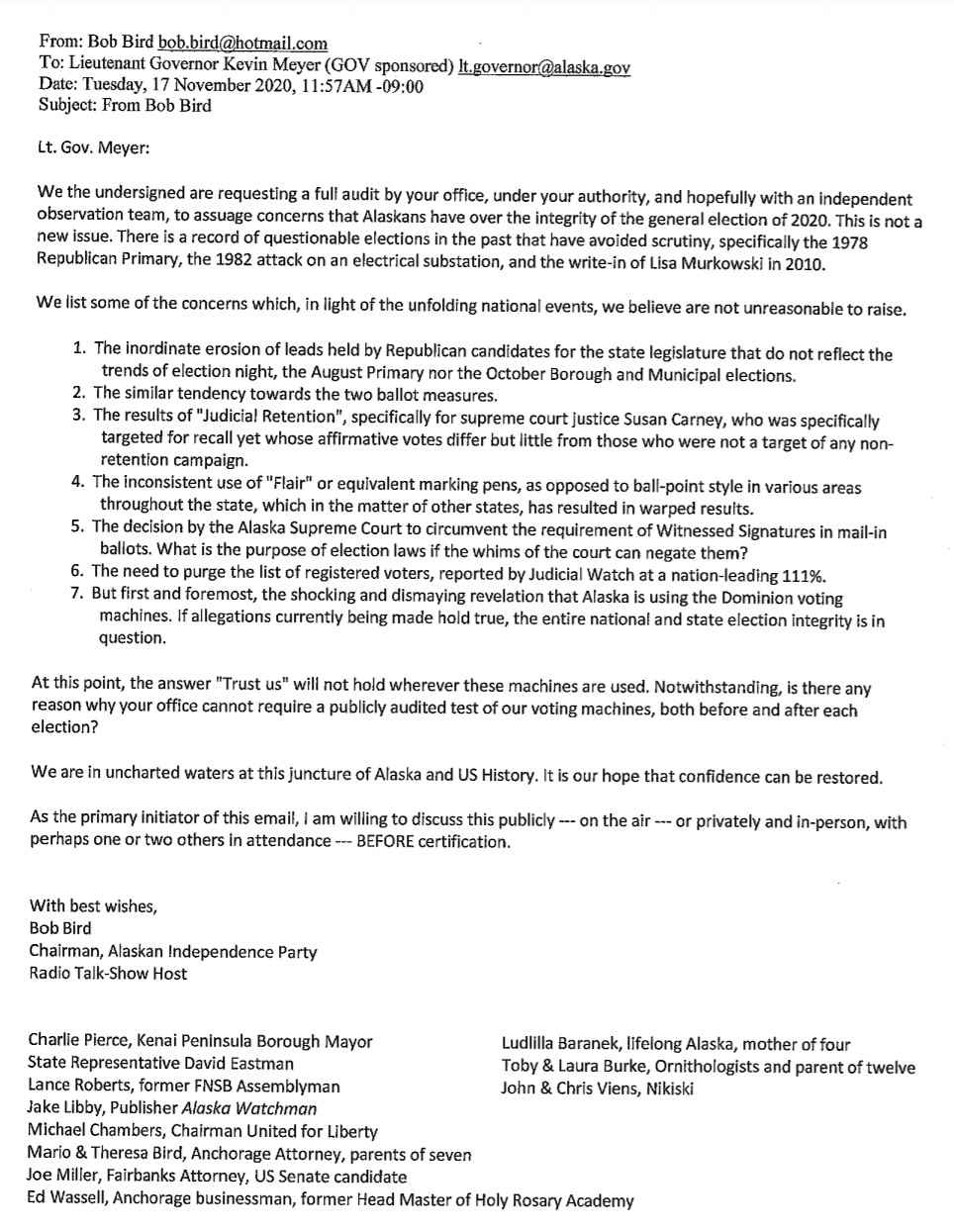