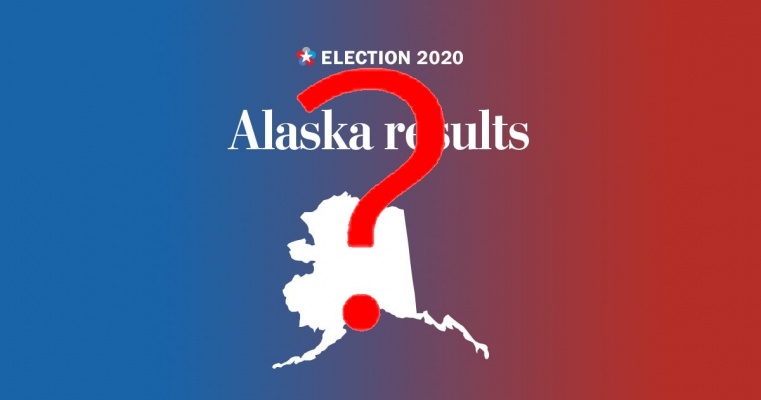 Anybody who has ever been scammed online should be concerned about our last state election, but it appears our public officials in Juneau are not likely to do much about it before the first half of this Legislative session is over in a month or two. Juneau swamp reporter for the Anchorage Daily News, James Brooks reports that change in Alaska election laws are driven by national politics, but that is not true. Alaskans know something is fishy. [1]

SB 39 by Sen. Shower has a hearing scheduled April 8, Thursday 3:30 p.m. at Butrovich 205 or by Teleconference. It provides penalties for election crimes.

Flawed elections lead to strong man chaos in Third World Countries. We should be concerned about it. Some Alaskans have taken steps to document the problems and have been dismissed as conspiracy theorists.

So let’s let the skeptics make their case here and now.

Not long after Alaska certified its election results and published those numbers online, I downloaded the files and quickly scanned through them myself looking for anomalies as already being reported in the six key states that swung the 2020 election, explained Mike Armour, in an email to this writer. Intuitively I knew the numbers didn’t add up but the single text file that the State published containing all 441 districts vote tallies made it difficult to see exactly what was going on.  With the aid of an associate, Troy W. Swanson, who has expertise in large scale data manipulation in a few hours we managed to sort out the data into a coherent Excel file format and confirm my earlier suspicions.

This writer has downloaded Division of Elections results and reviewed them myself for every Alaska election since 1978. It is a way to see how certain communities think and try to understand how some people are elected to public office. I believe the voters deserve exactly who they elect, if the election is fair.

All Alaska election results are available at the Alaska Division of Elections website. [2]

Armour continued: What became glaringly obvious was that Alaska had more votes cast than people to cast them and almost without exception each district reported a surplus vote tally over 100%. In a small number of districts those percentage figures rose to anywhere from 115% to in one case over 300%. Throwing in a formula that would calculate an average for all 441 districts we determined that Alaska experienced an Average of 107% over vote statewide. These figures were later confirmed by an independent analysis that placed Alaska at the top of the nation in “Over Votes” with 108%.

But what can Lt. Gov. Kevin Meyers do about it?

Eight different ideas—two from Gov. Mike Dunleavy’s Administration, three from legislative Democrats and three from legislative Republicans—are percolating in the state capital, according to Brooks’ ADN piece. His story goes on to let one house Democrat, Rep. Jonathan Kreiss-Thompson of Sitka opine on the equivalent of Shakespeare’s play Much Ado About Nothing. Then, in his vacuum of objectivity, Brooks compares the Alaska situation to something he calls controversial in Georgia. 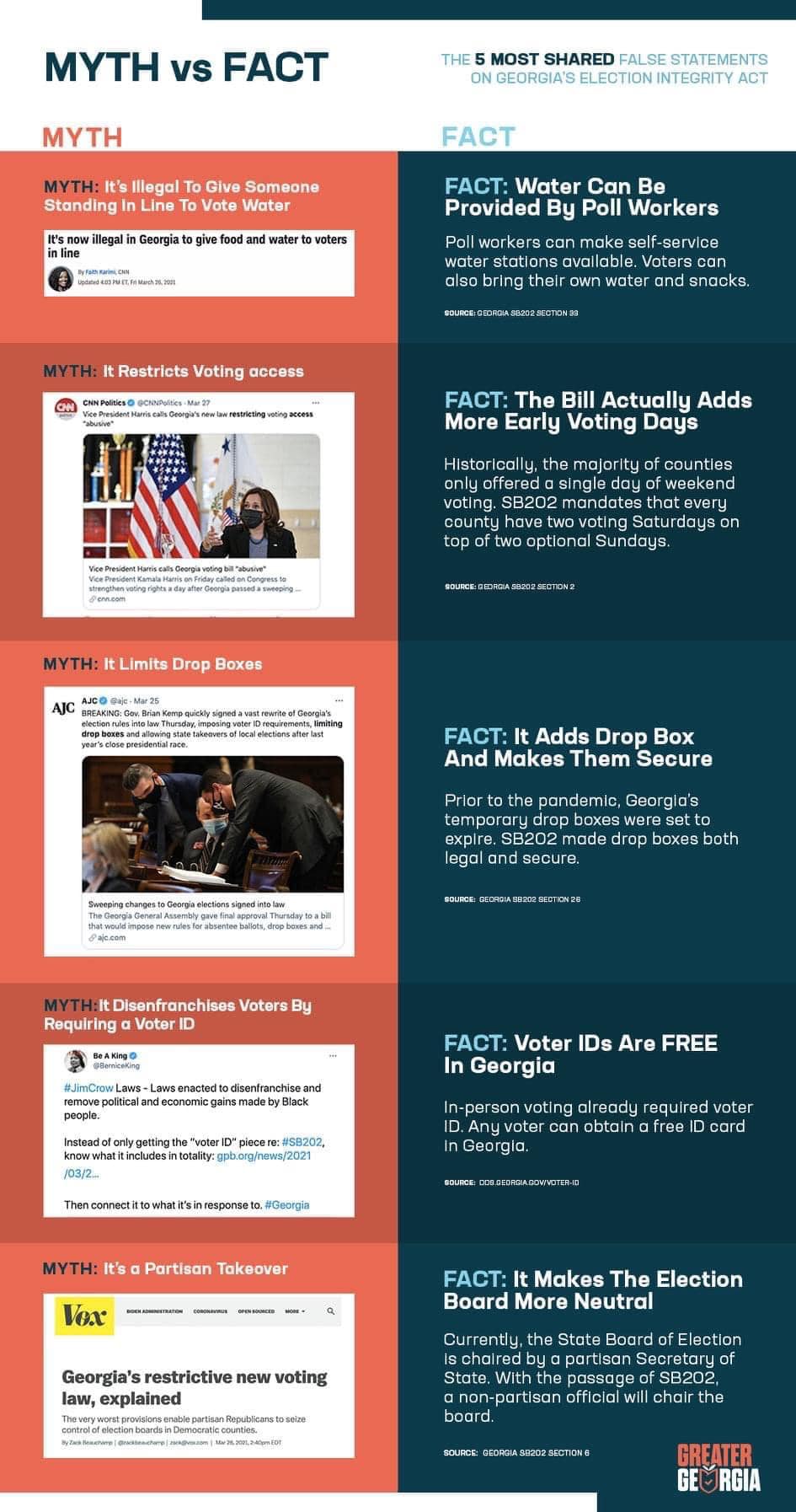 ADN as usual wants us to do it the way they do it Outside. I subscribe to ADN strictly for entertainment.

An overview of introduced bills related to Alaska election is in the References. [3] Further details can be found at akleg.gov.

This is the first half of the 32nd Alaska Legislature. 160 House bills have been introduced and 117 Senate bills. We have all seen how the circus has been conducted to date with a majority of Republicans elected by voters but a minority of Democrats able to seduce two Republicans to assure more of what we have all come to expect from Juneau.

But the Scam May be Bigger than this: What are the possibilities of Electronic Voting Manipulation? If you have ever lost any money from someone who convinced you to contribute to something online, you know how helpless you feel when that person disappears into the ether. Once the money transfers the former “friend” is gone and you don’t want to accept that you have done something so stupid. Perhaps that is the reason our elected officials have not taken meaningful steps to deal with the election calamity we have experienced—they are in denial.  I was one of the Alaskans who received the pathetic letter from our Lt. Governor declaring that the voter database was hacked. [4]

The mere fact that any person with physical access or remote access via the Internet can alter vote counts should scare the hell out of everyone, continues Armour. To compound the problem there are NO security features built into the system to prevent this type of action, and NO encryption techniques or restricted access methods employed to prevent them from altering or deleting the log files that would normally capture this kind of illegal activity.

In the 2020 election an initiative to change the primary election system passed. Could The Jungle Primary with Ranked Choice Voting lead to one-party rule?

Dominion software uses fractionalized vote counts, whereby vote tallies are stored as fractions rather than whole numbers, explains Armour. Fractionalized vote counts enable use of a feature known as Ranked Choice Voting or RVC. Anyone can set the weighted percentage that a vote receives; for instance a single vote for a particular candidate can be assigned a 1.25 value while that candidate’s opponent is assigned 0.75. The number of votes reported will remain true, but the count will favor a chosen candidate over their opponent bywhatever margin is pre-selected. The operator’s manual describes this as a “predetermined outcome” that allows manipulators to “pick the winner.”

But there is more to the problem, according to Armour: The entire adjudication process within the system is designed to allow an individual to alter or delete a single ballot or a group of ballots as they see fit. There is no auditing feature contained within the adjudication function to track these changes and the resulting ballot images will only reflect the outcome of any alterations that were made. This is why the Georgia Secretary of State has petitioned the courts to withhold the paper ballots from the auditors and ONLY allow inspection of the ballot images. 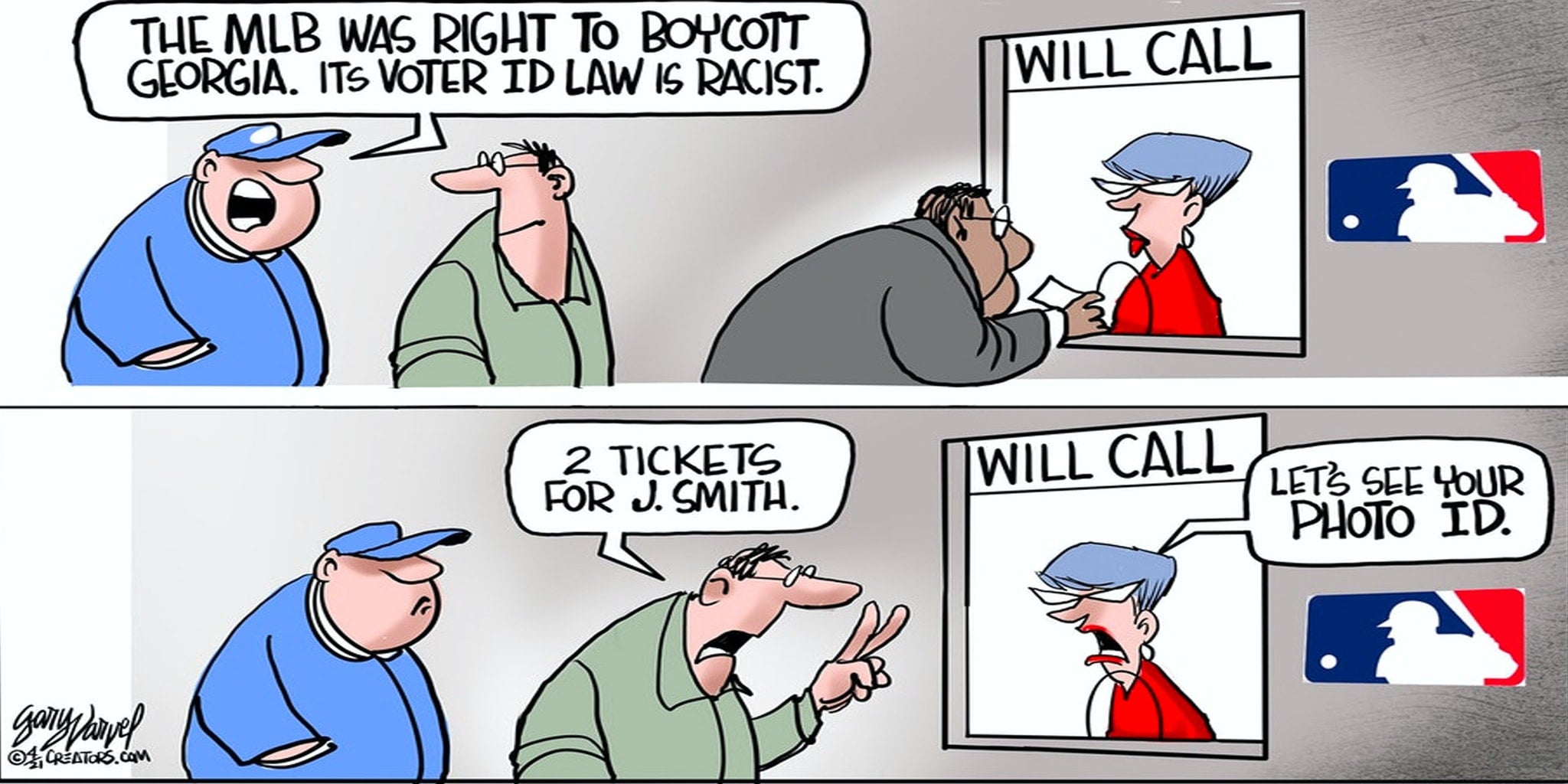 In the meantime Armour has put information gleaned from Division of Elections data out there for Alaskans to consider. He believes the computer system used to count Alaska votes is flawed and has been for a while. He has set up a petition for Alaskans who also think something should be done.

The intended purpose of my petition was to have the state decertify Dominion Voting System based on the deficiencies of its nonexistent security systems, its lack of any real auditing functions and the ease with which it can be hacked by any interested third party, explains Armour. Not one of the proposed bills in either the House or Senate addresses these issues, and so far as I can tell none of them provide a solution to a major problem that we know exists within the election infrastructure. At best some of those bills criminalize an already illegal act and will do nothing to stop a criminal from committing that act. At worst some of those bills will only enable even more voter fraud with more mail in ballots and even preregistering underage teens.  Alaska has enough problems with bloated voter rolls and the solution is to make it even worse?

I wrote and published online back in Nov. of 2020 demanding that Alaska decertifies and ban Dominion Voting Systems from use in Alaska and listed the reasons why those steps should be taken, Armour explained. Not one of the several letters I wrote to the Lt. Gov. or the Director of the Division of Elections, explaining the petition or the facts surrounding its claims, ever elicited a single response from any government official. To the best of my knowledge every fact I listed in that document as reasons for decertification still holds true today and has never been refuted or disproven. Given what we knew immediately following the election Alaska should have never certified its results without performing a complete forensic analysis to determine if in fact anything untoward happened in our election.

Gov. Dunleavy has proposed legislation to allow Alaskans to challenge election irregularities for investigation by the Alaska Attorney General. But as the elected officials in Juneau are now preparing their itineraries for return to their districts this is probably out of their reach before they go home.

With elections coming up in 2022 maybe they will remember before then.

[3] Current bills dealing with Alaska Elections pending in the Legislature.

HB 96—HOUSE RULES BY REQUEST OF THE GOVERNOR—Short Title: ELECTIONS; VOTING; BALLOT REQS; “An Act relating to
elections; and providing for an effective date.” Introduced 02/18/21. Status: In State Affairs, then Judiciary and Finance.

Introduced03/17/21. Status: In State Affairs then Judiciary and Finance.

SB 39—Shower—Short Title: BALLOT CUSTODY/TAMPERING; VOTER REG; MAIL;  “An Act relating to elections; relating to voter registration; relating to ballots and a system of tracking and accounting for ballots; establishing an election offense hotline; designating as a class A misdemeanor the collection of ballots from other voters; designating as a class C felony the intentional opening or tampering with a sealed ballot, certificate, or package of ballots without authorization from the director of the division of elections; and providing for an effective date.”

SB 43—Hughes—Short Title: ELECTIONS, VOTING, CAMPAIGN FINANCE; “An Act relating to campaign finance and initiatives; relating to elections and voting; and relating to unlawful interference with voting.” Introduced 01/15/21 and referred to two committies State Affairs and Judiciary. It was heard in State Affairs on 02/22/21 where Sen. Holland and Sen. Shower voted for it and Sen. Reinbold voted No Recommendation. This bill was referred to Judiciary and Finance by Sen. President Mich

For Fiscal Note Analysis of this bill go to References. 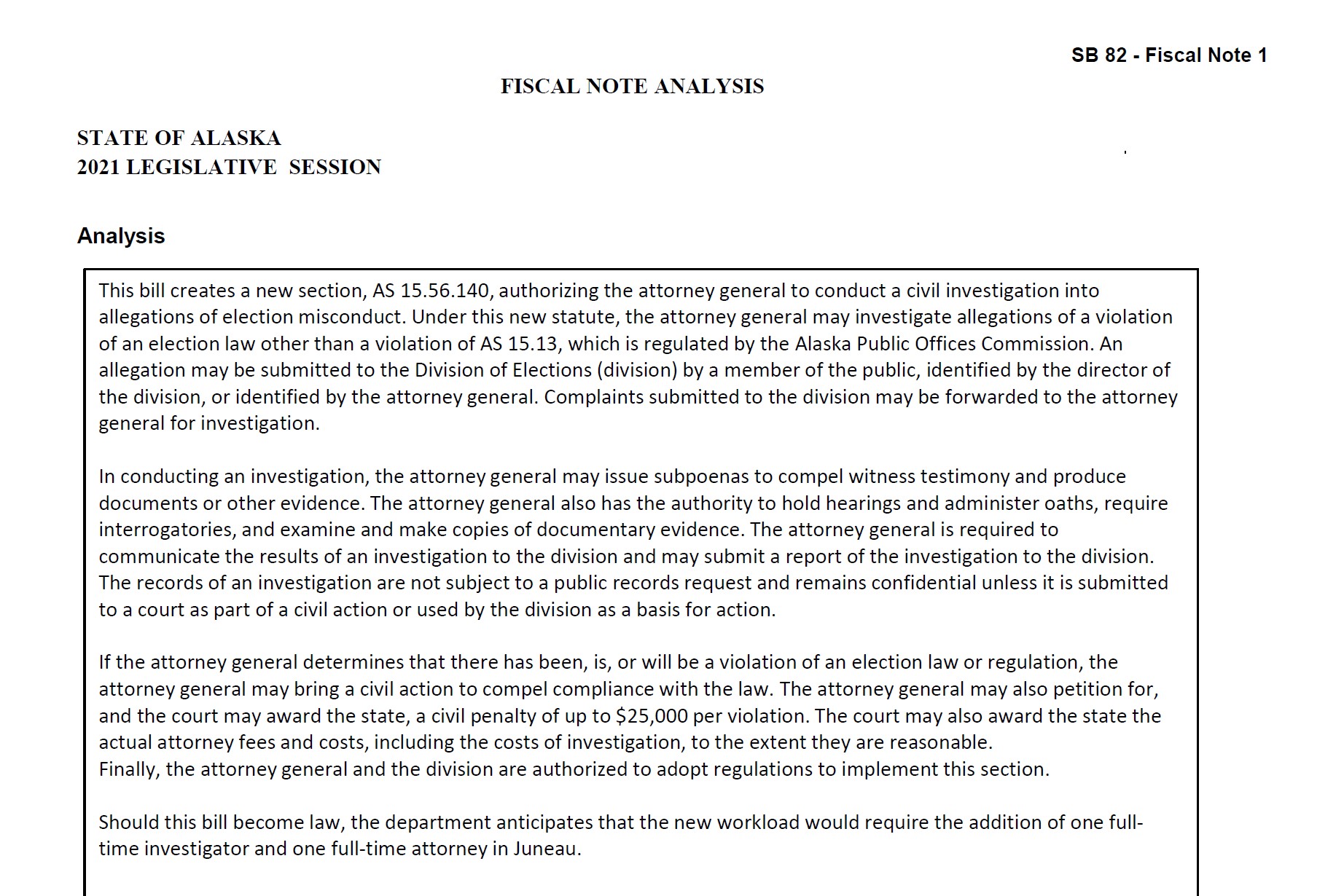 SB 83—Senate Rules by Request of the Governor—Short Title: ELECTIONS; VOTING; BALLOT REQS; “An Act relating to elections; and providing for an effective date.” Provides for security of information and procedures for qualified voters. Introduced 02/12/21, this bill is currently in State Affairs Committee and next goes to Finance.

SB 83 Fiscal Note analysis: “This bill includes permissive provisions that would allow the division to conduct elections in a way that ensures confidence and integrity in the election process and its results. The bill allows for increased post-election audits, by-mail voting in communities under 750, and stronger requirements for absentee ballot voter certificates. Additionally, it requires the division to determine
the costs of recounts in regulation instead of statute. Passage of this legislation will have no financial impact on the division.” 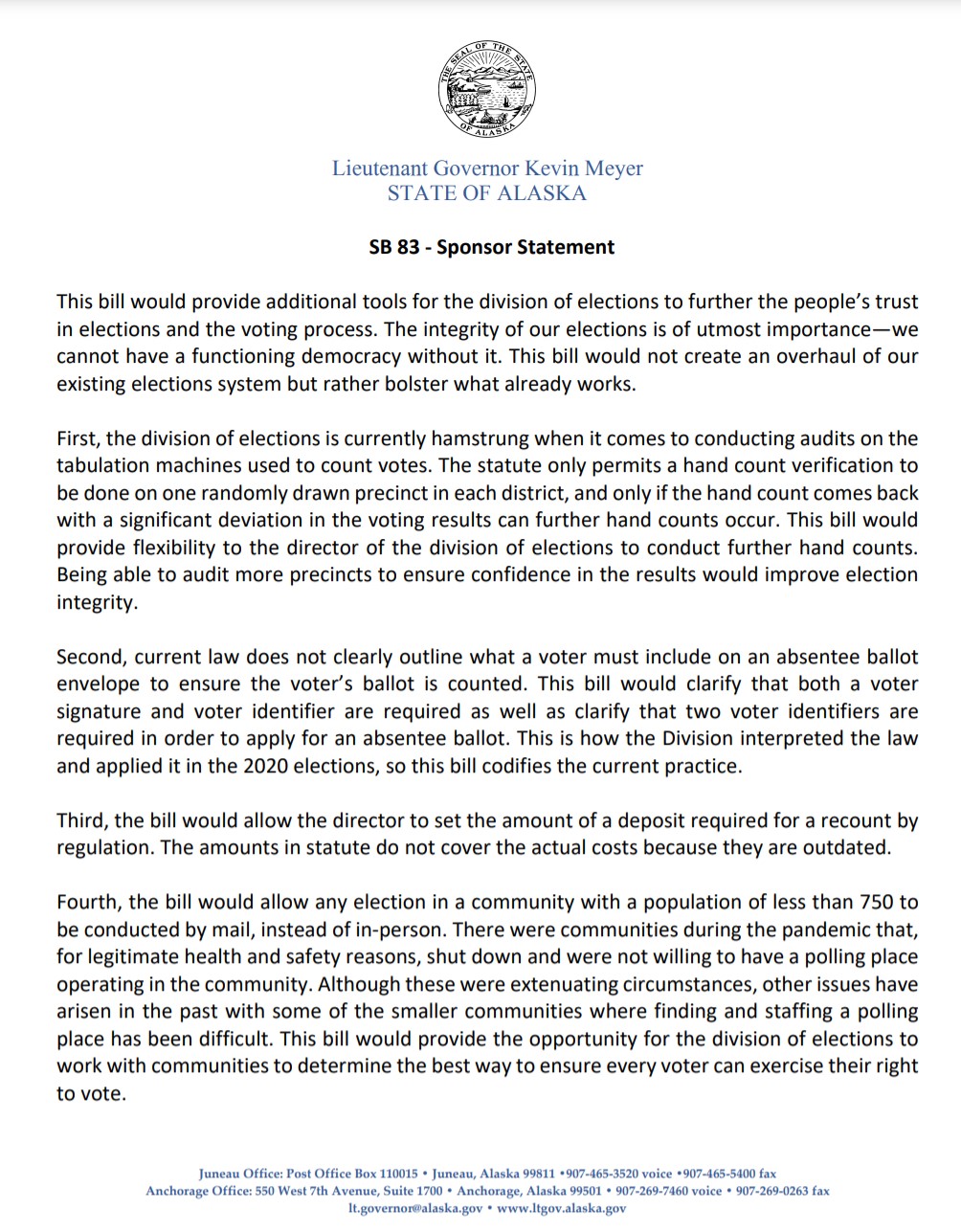 Previous observations of the 2020 Alaska Election are here: https://donnliston.co/2021/03/alaska-election-questions.html