In his self-satisfied memoir—written after serving two terms as Alaska’s fifth governor–Jay Hammond, in his book Tales of Alaska’s Bushrat Governor, reflects on …major disappointments in my second term. One, deemed by many the biggest blunder of my administration, was an attempt to promote Alaska agriculture. [1]

A knee-jerk reaction to what Hammond felt was the perception by critics that he was opposed to all development, agriculture development was his effort at a political counter-punch.

In Hammond’s words:  Tourism and fishing were both successful examples of efforts that paid off handsomely. But with agriculture, I concurrently violated and proved the wisdom of a basic rule I had previously tried to follow: You can’t make the desert flower simply by dousing it with dollars. Money my administration sowed in agriculture reaped little but bitterness and frustration.

Hammond describes the mechanism to develop Alaska agriculture under the direction of Bob Palmer, himself a former Kansas farm boy, played blacksmith for this project, slowly forging then hammering together, link after link of this chain.  In the process, he sometimes showered sparks on nay-saying critics peering over his shoulder.

During its first term, the Hammond Administration identified almost 22 Million acres of arable land in Alaska, …more than many so-called “farm belt” states combined, writes Hammond. He says he was skeptical of agricultural potential unrealized at Delta but, I was finally persuaded by the almost unanimous support of Alaskans who knew anything at all about farming. An Agriculture Action Council compromised of university experts and already successful farmers convinced me and later demon-strated that because of our long daylight summers, unique soil and climatic conditions, it was possible to grow crops such as barley and rape seed of extraordinarily high protein content and yield per acre.

This was the genesis of the Delta Barley Project. It was part of a plan described by the late governor as including: 1) Preparing a massive amount of arable land to produce crops of commercial quality. 2) Attracting people able and willing to farm. 3) Building grain storage facilities for crop collection. 4) Establishing rail transportation to a seaport. 5) Building a grain terminal at the rail/shipping port of Seward, and finally, 6) Attracting a Pacific Rim market.

When we went out of office in 1982 each link was in place except one: The Seward grain terminal, reflects Hammond.

Both site and materials for this facility had been purchased by the state, but before construction could start, the oil-flush Port of Valdez offered to build a grain terminal there. The new (Steve Cowper) administration and legislature, persuaded they could save money with the Valdez site, arbitrarily cancelled the Seward terminal, to the dismay of almost everyone involved in the Delta project.

Ultimately, Valdez–unconnected by railroad—built its terminal, and the state sold at enormous loss, both the Seward Terminal materials and the grain hopper railroad cars. I am told the loss exceeded the $3 million required to finish the Seward terminal. To date, not one bushel of grain has gone to the Valdez facility and moose browse has reclaimed most of the acreage cleared near Delta.

Alaska was nouveau riche[2] then, with a hick governor. Money was the center of every political decision whether he wanted it to be or not. We didn’t need to worry about feeding Alaskans because farming was too much work and we were now getting big box stores that drove costs for everything down and traditional Alaskan businesses out.

While the number of farms in production has generally gone down in the United States, Alaska is gaining farms.

Ironically, I went to Juneau around this time to serve as aide to an Anchorage legislator when our current Director of Agriculture, David Schade, was also working there for another legislator. We weren’t familiar then but we have had similar experiences, which I learned during a recent interview with Schade, to talk about food security.

Is the Department of Agriculture interested in Food Security or just in helping farmers succeed?

The two are not mutually exclusive, explained Schade. For food security our farmers are going to have to be the solution. First we must define what is food security? The question is do you really have enough food or are you worried about it? Either way you look at it we are in serious situation right now. It is not theoretical, we are food insecure right now. If we didn’t have the Food Box program going on we would be in really big trouble. [3]

Mike’s Meats in Eagle River, and Mat Valley Meats in Wasilla, both have food box programs too. I have witnessed the constant calls received for boxes of meat sent to virtually every corner of the state, paid for by consumers themselves. 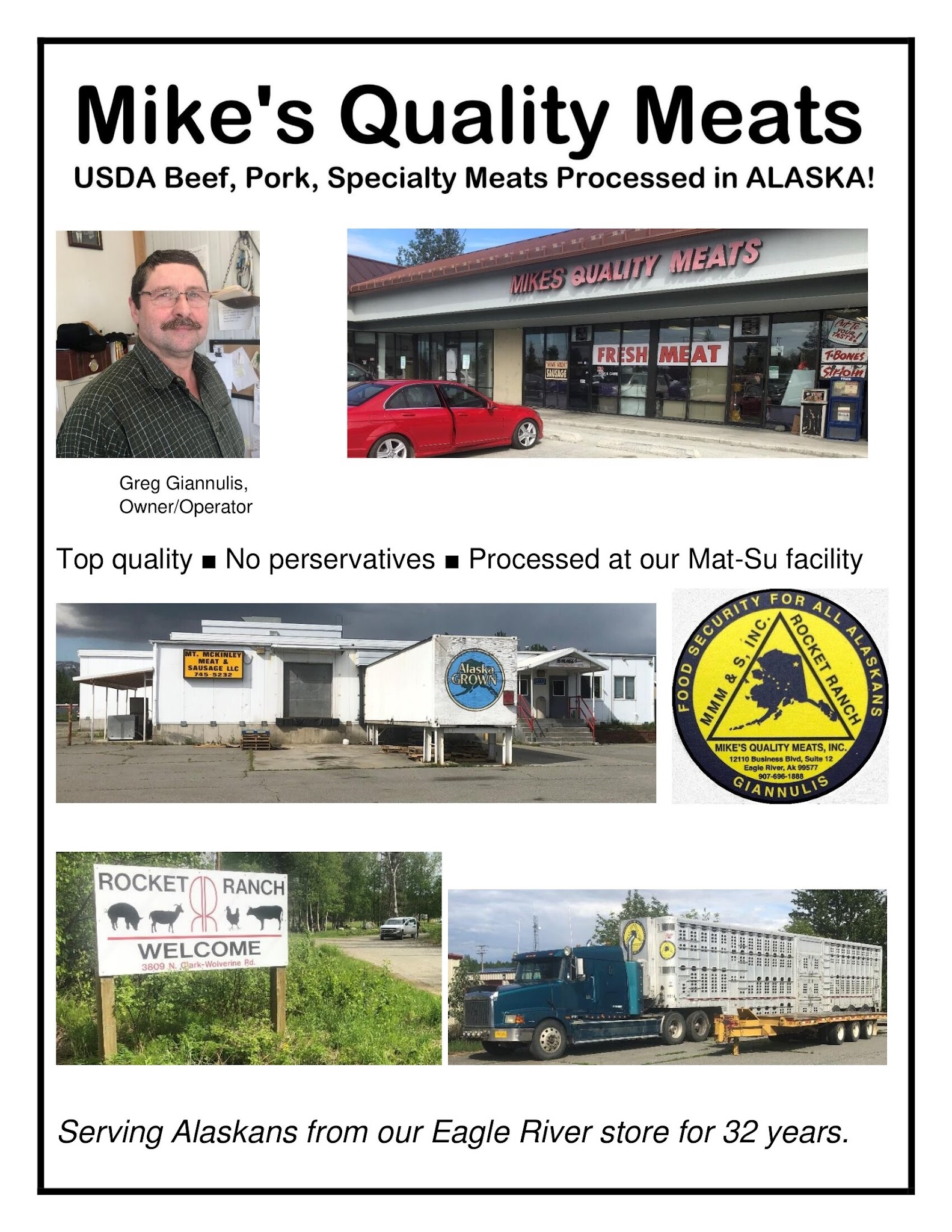 But the State of Alaska in this case again defaults to needs of rural Alaska, and the great dependent unorganized borough where nobody is taxed for any government services. For every question of Alaska public policy the first answer is to defer to circumstances of people who choose to live in the bush.

Who is the Director of Agriculture? 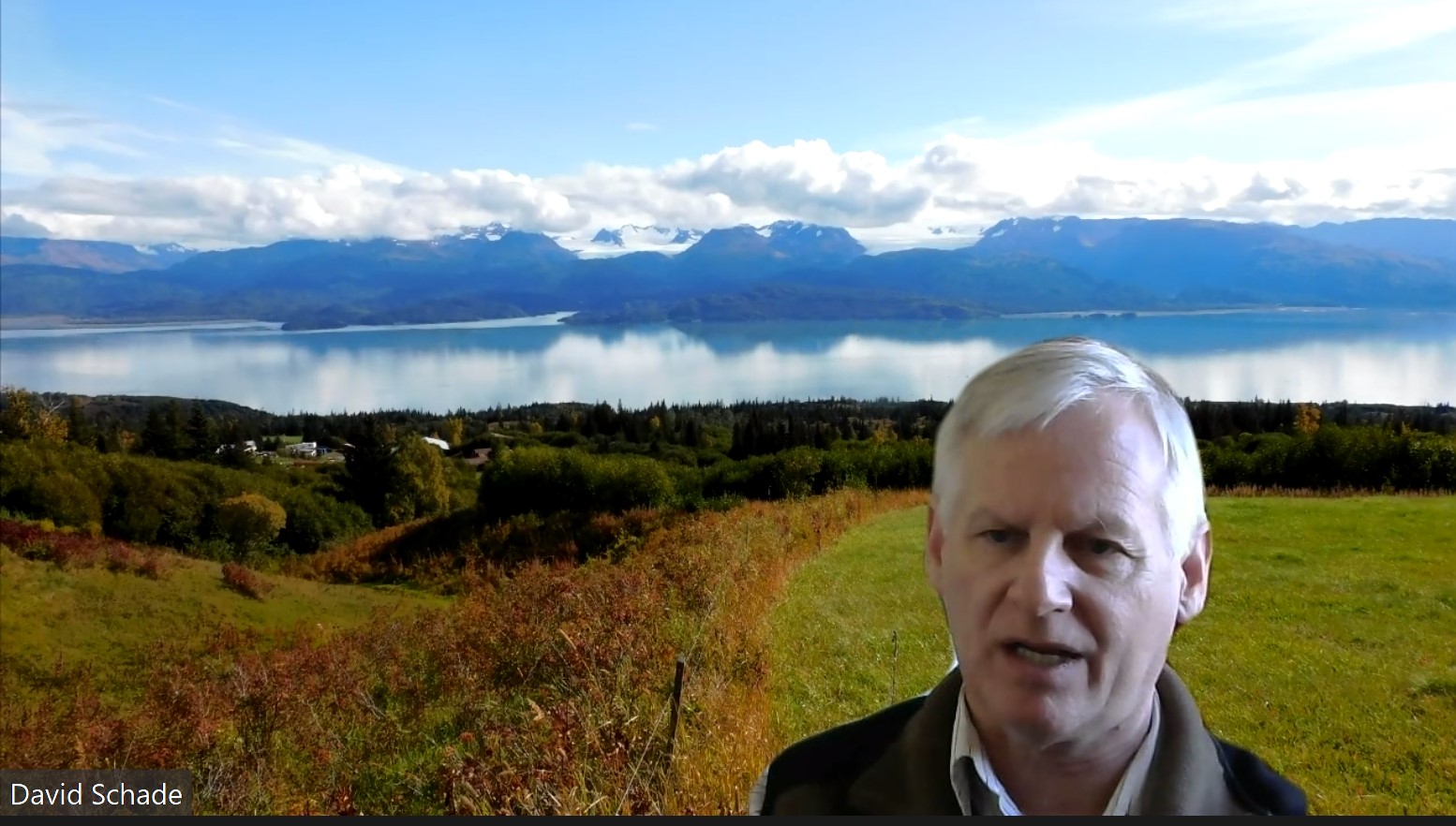 Schade grew up on an Alaska homestead and intimately knows the plight of Alaska’s rural farmers: If we didn’t grow it, we didn’t have it to eat. So I come from the viewpoint that If it didn’t come in on the ship in the fall you didn’t have it for a year. You had to know how to make it work. That is still how it works in a lot of Alaska. When we lost Ravn Air (from bankruptcy during Covid) we lost a food delivery network. For the last year we have been trying to determine how to get that food distributed.

Once Schade got an education, he developed a vision for Alaska agriculture.

I am an ag economist, that was my undergrad degree, from the University of Idaho, explains Schade. I grew up on a farm and wanted to figure out how to make money on a farm. My master’s degree is in public administration so I am probably the only person who has sat in the director’s chair who spent probably half of his career in the private sector, less in the public sector. I come at this from both viewpoints. I know what it takes to make it work on the farm, but you must be able to have consumers buy produce at a price that can make money for the producers.

Schade continues: We aren’t dealing with food security as the Food Bank of Alaska deals with it. Our approach is How do we grow it out there? We have 85,000 acres of cleared cropland in this state as of 2017. We are only using 35,000 acres of that productively. If we start growing on the other 50,000 acres we put that food into the food chain.

On the other hand we do have some success in the agri-culture sector of the economy.

Alaska agriculture is producing $40 million per year by US statistics, according to Schade. 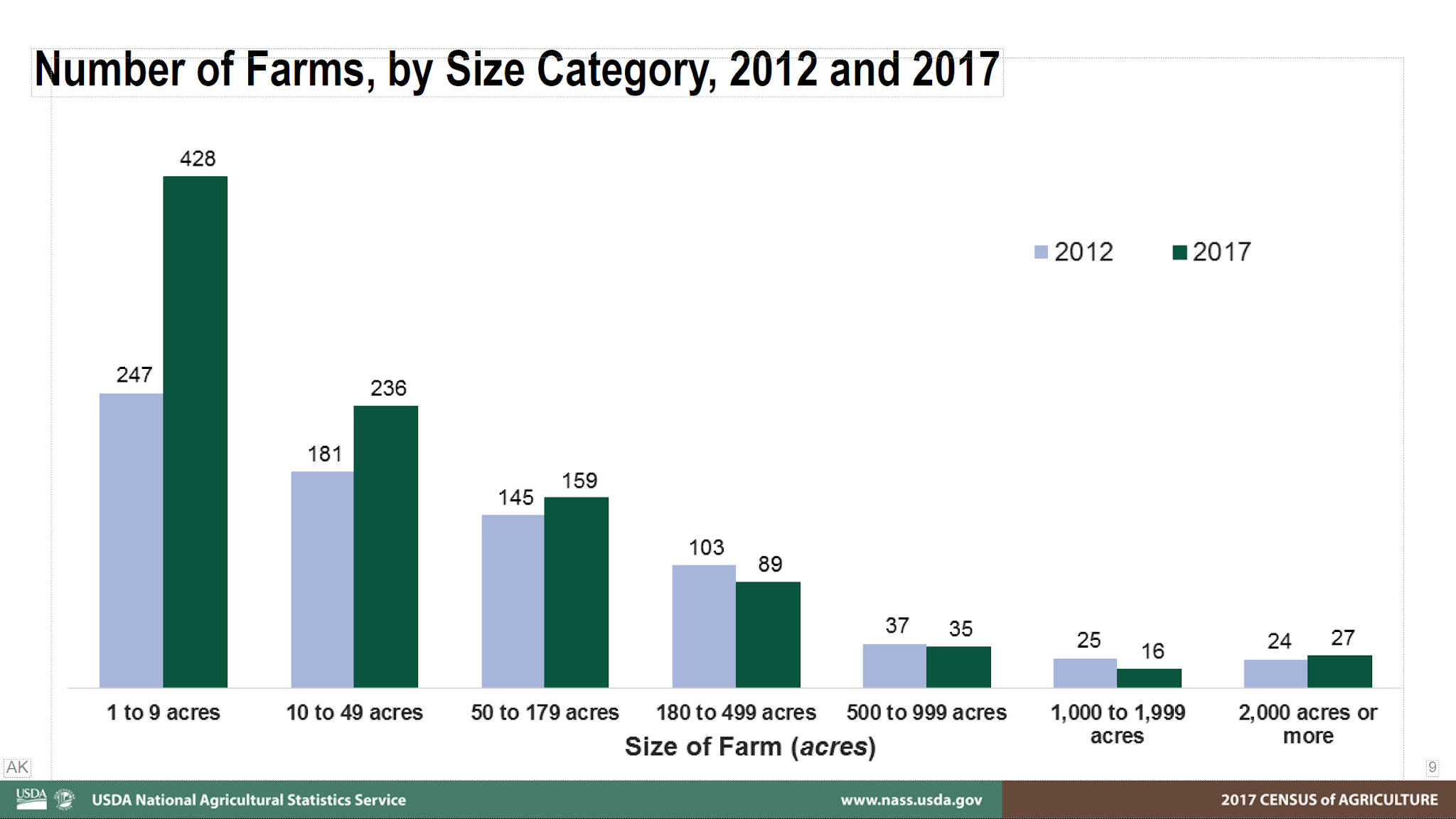 Alaskans eat $2 Billion per year worth of food. We have an extremely small amount of red meat being produced. We are hoping in the Nenana Totchaket to get 50,000 acres into production so we can also build the red meat industry in this state.

10,000 acre commercial spreads are needed with incremental increases over coming years as producers are successful. 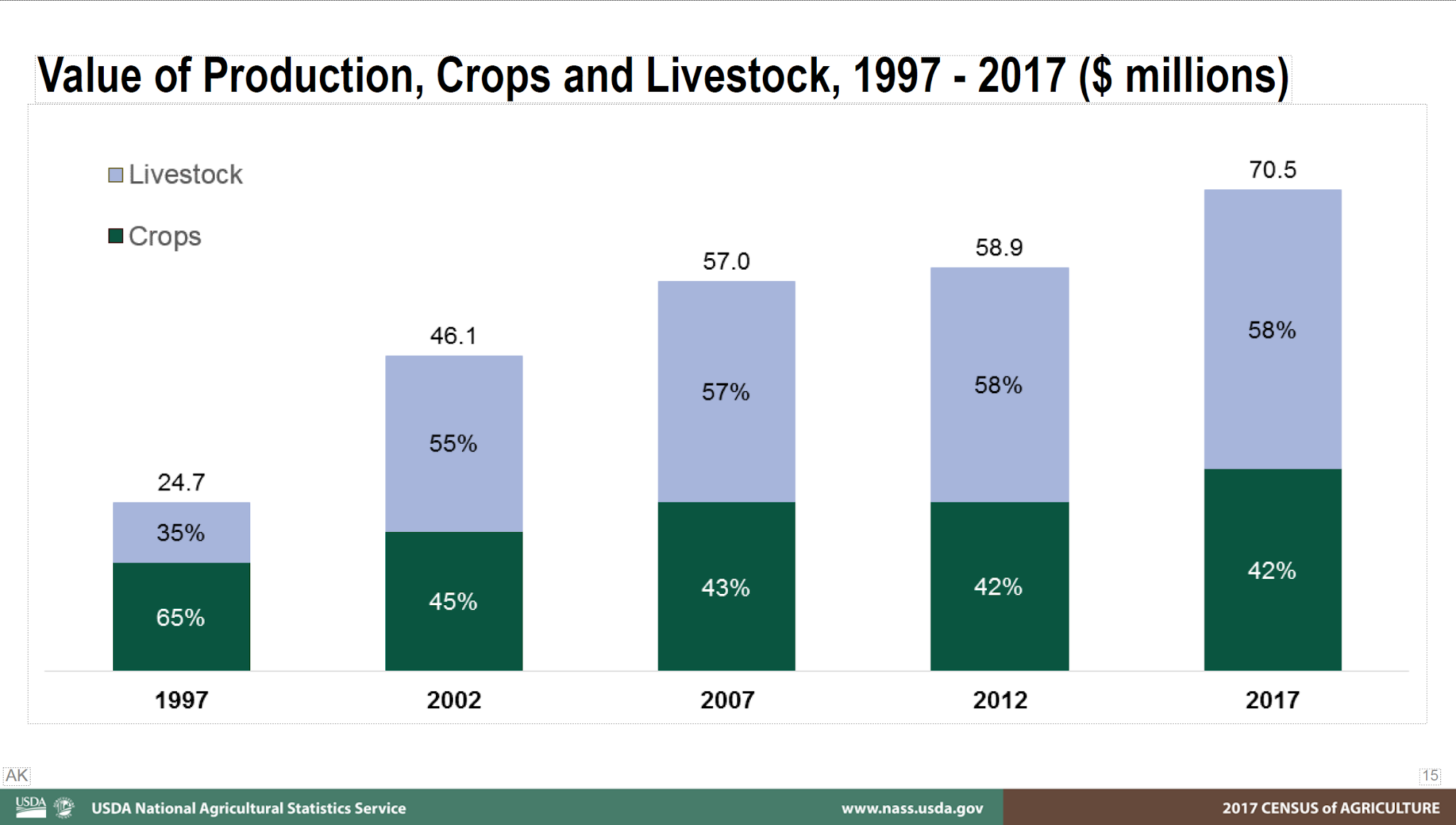 Remember, Gov. Hammond reported 22 million arable acres in the early 1990s. Those were raw acres requiring a lot of work to put into production. Over the decades of mostly benign neglect for Alaska agriculture, increasing ag land for food security has not been a priority until an earthquake and pandemic revealed how vulnerable Alaskans are to food supply lines.

The problem right now is three-fold: 1. We don’t have food storage for the food that we have. Step One has to be to build storage. The question is can you store what you grow and what you can ship in? We found out with the food box program that we do not have adequate storage in our villages and small communities as we go out.

We don’t have any bush communities that can adequately supply all of their food. When you go to supplement them they don’t have the storage capacity to build it up. We are working on that.

The third component is education. How do we help people learn to do this?  Once you learn how to do this you can do it again. A lot of people don’t realize the amazing opportunities we have to grow things even in our far-flung communities. 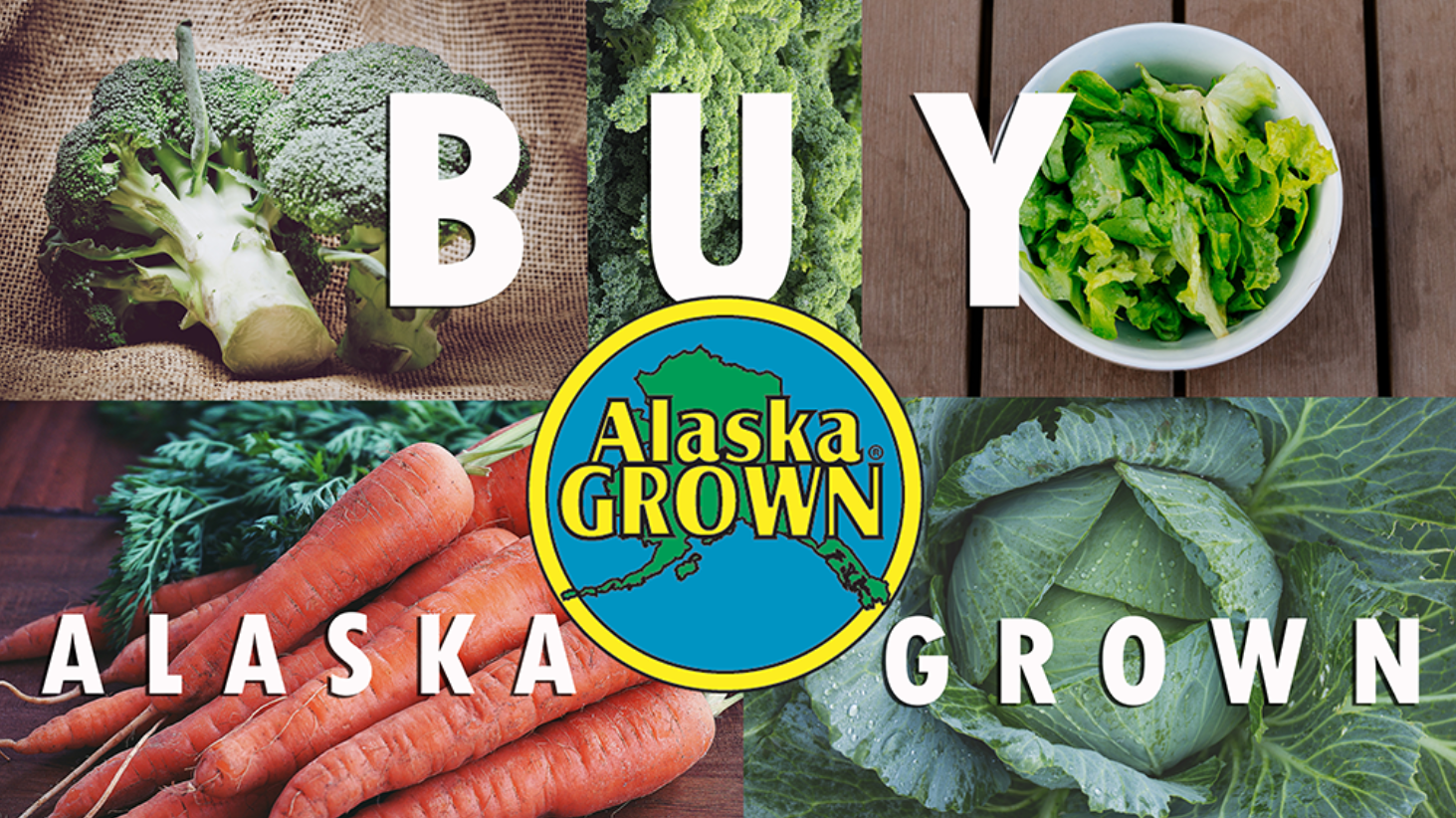 The Division of Agriculture is also active in promoting Alaskan Grown products into local grocery stores. The argument is something like, increased cost of locally grown products means selling more Alaska Grown food makes more money for the store than cheaper and less fresh Outside products. A whole campaign is available for retailers to promote this. 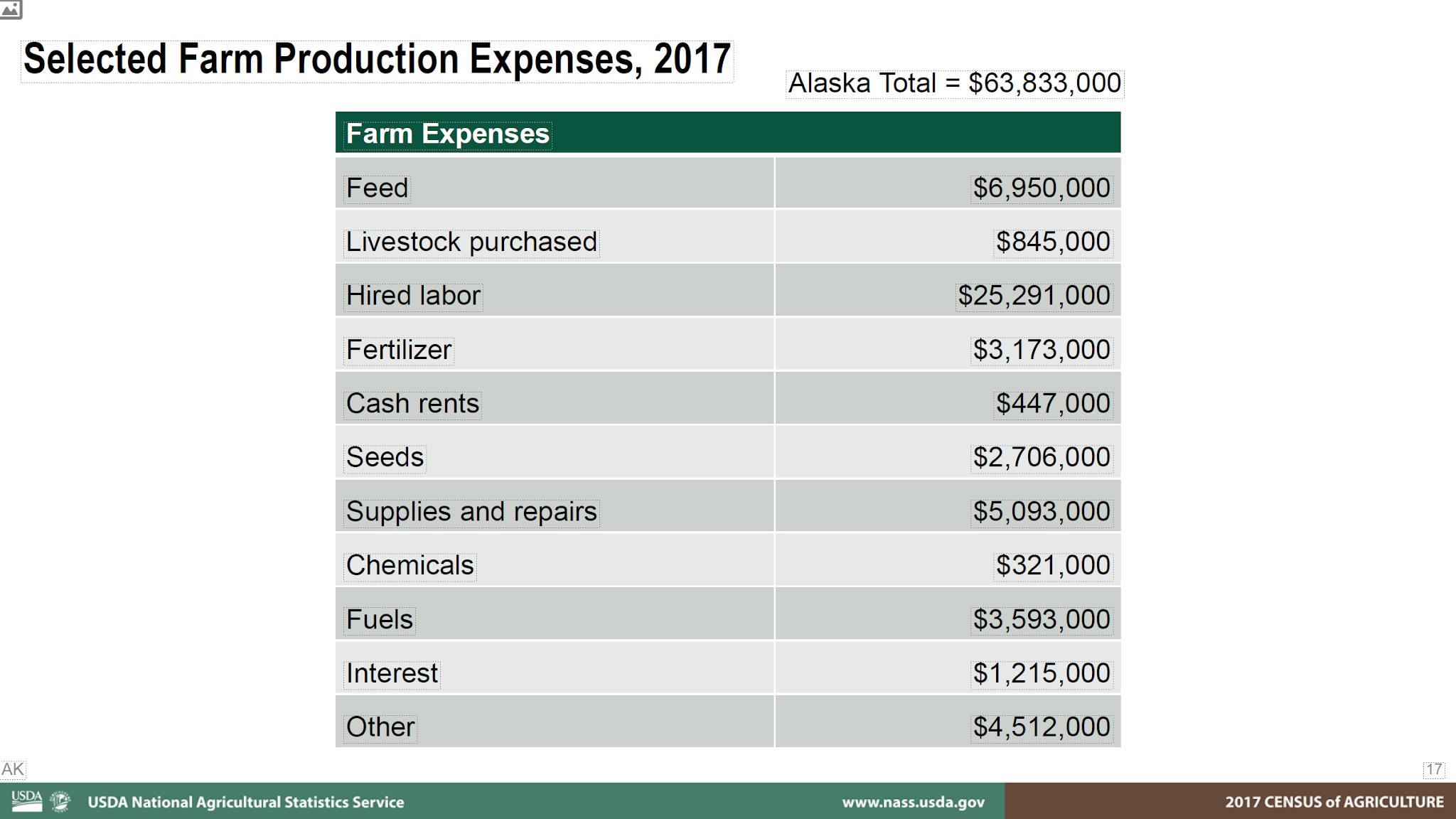 A lot is invested in producing Alaska’s agriculture products.

In the shadow of oil development, Gov. Hammond believed Tourism and Fishing were examples of efforts that paid off handsomely. Developing an agriculture sector of the economy to feed Alaskans after the oil boom ended never crossed anybody’s minds. During his two terms as governor Hammond reports that $15 billion flooded into Alaska’s coffers through the Trans-Alaska Pipeline. In retrospect it seems we had an opportunity to become self-sufficient and food secure if we had wanted to do that.

The new Microgrant Program is all about food security. Right now we are looking to create food security. The feds say the Division of Agriculture gets to decide where we are food insecure.

There is excitement here; we have 2,500 applications. I expected to get 500, and we have $1.8 million. The rough number is $45 million worth of requests. We have years to do this but we are automating it now and getting it going as a long-term program. It looks like we will have about $2 million in grants annually so we need to figure out priorities and help people grow out their resiliency in each of these communities.

Oh, praise the Lord! The ultimate solution to food insecurity for Alaskans is manna from Washington.

BUT, maybe a bit more wisely this time! 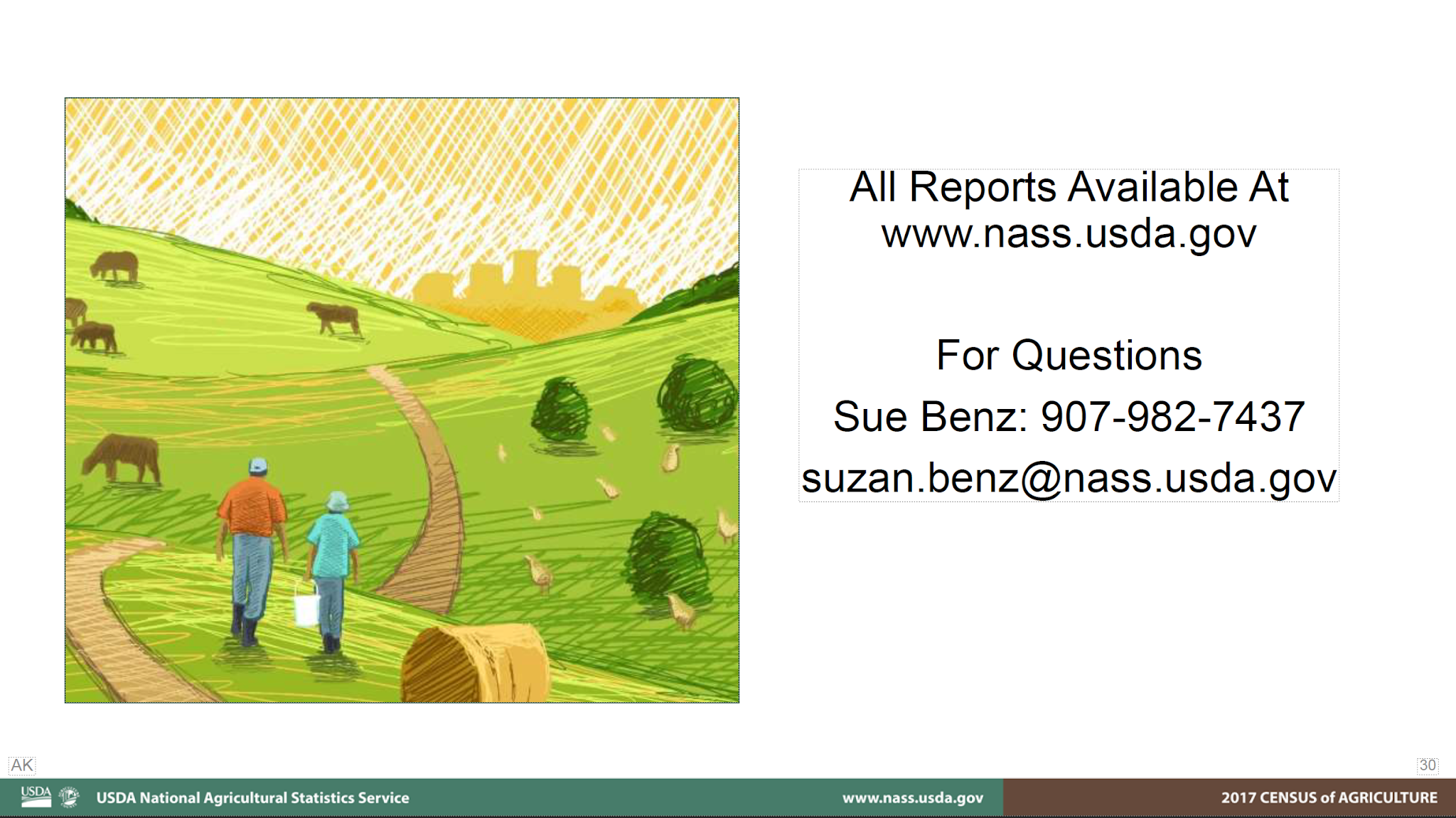 Go to these links for additional stories about the pursuit of Alaska Food Security:

Food for Thought for Alaskans

Who is Making a Difference? (Alaska Food Security)

Who Dares to Farm in Alaska (Alaska Food Security)

How Can Alaska Gain Food Security? 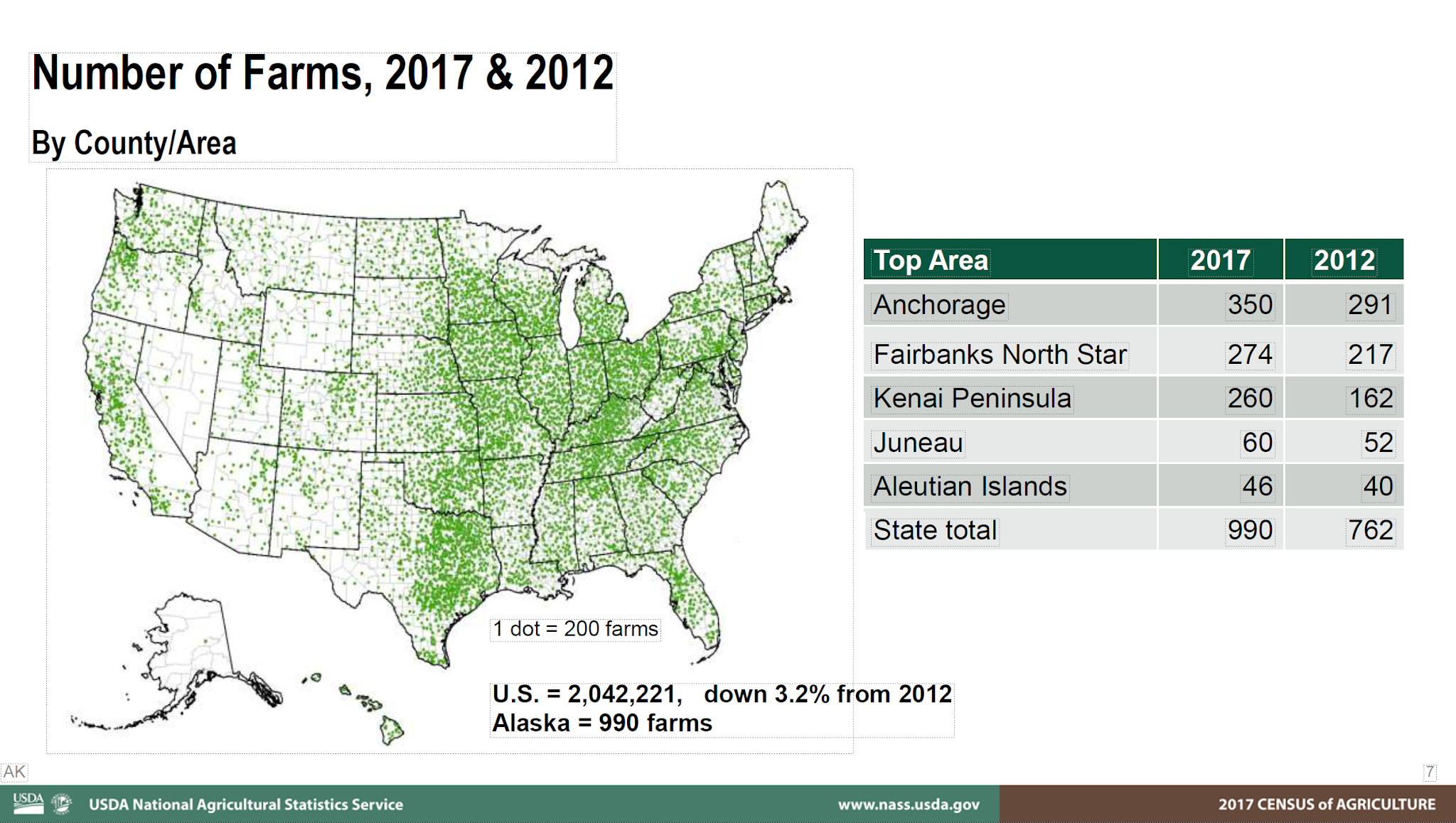