Alaskans are generally stuck at the bottom of the 5-level pyramid of human needs defined in Abraham Maslow’s 1943 paper, A Theory of Human Motivation. His 1954 book “Motivation and Personality” expanded on this theory and remains a basic underpinning of modern sociology, psychology and management training. If humans are fulfilled in their needs–from the most basic to the most advanced–they ultimately reach some degree of self actualization.[1]

Some might argue that after more than 60 years of statehood it’s time our elected officials demonstrated  how we can realize some self-actualization for needs of Alaskans. That is called “vision.”

Over my own life, reaching self-actualization has meant thinking about what is important and exploring how elevating my life from Physiological>Safety>Love and Belonging>Esteem can allow me to contribute to making Alaska a better place in which to live and share in the glory.

1: Physiological needs are the lowest level of Maslow’s hierarchy of needs. They are the most essential things a person needs to survive. They include the need for shelter, water, food, warmth, rest, and health. A person’s motivation at this level derives from their instinct to survive.

Our Alaska economy keeps a lot of people at this basic level. We don’t produce much and everything is more expensive. Housing is expensive and requires heat in winter from electricity or fossil fuels. Healthcare is expensive although we have a lot of people subsidized by the government. Many new arrivals to Alaska realize it is expensive to live here and return home after their Alaska Adventure.

And then there is the matter of food.

As kids we Alaskans drank milk made from powder and ate a lot of cereal with sugar. Every magazine in the store had ten cents added on the cover cost for “shipping.” When we ordered something from the catalog it sometimes had some production flaw but couldn’t be shipped back because of the cost of shipping. Workers at the Sears warehouse in Chicago obviously knew that. Shipping costs inflate everything included  on the Alaska Hierarchy of Needs.

So now, a half century after it began, our oil bonanza is becoming another part of the state portfolio of income-producing commodities; furs, gold, fish, game, timber, minerals, Alaskans
share the bounty of under the constitution. It’s a given. But what if our elected officials could do something to directly increase Physiological Needs of all Alaskans? Does the State of Alaska have something that would  contribute qualitatively to everyone’s Hierarchy of Needs?

The State of Alaska is the key player in natural resource development for agriculture, explained Ray Nix, former Natural Resource Manager for the Matanuska-Susitna Borough. Nix also worked 24 years with the Alaska Department of Natural Resources, over 10 years at the Division of Agriculture.

For the amount of land available, we have little agriculture production. The challenges for a successful agriculture operation are sufficient infrastructure, viable products, and viable market. If any one of those elements are lacking successful commercial agriculture cannot succeed. Small operations can be successful, can succeed, but expansion is limited if  they don’t have a road to the farm or power.Infrastructure is key.

Eking out a subsistence living on 640 acres is not commercial agriculture. It is labor intensive and subject to the whims of nature. 700,000 Alaskans require more than what is currently available by valiant efforts for consistent nourishment. Resource managers have known this for a long time but how to spend money from natural resource development is much easier for elected officials to imagine than to determine how to invest wisely in Alaskan food sustainability for the future. Targeted investments to increase food security need to be addressed by the Department of Natural Resources.

One of the largest parcels of land left–just connected by a bridge across the Nenana River—is about 148,000 acres of state-owned ag land. That land currently doesn’t have power or a road into the project area.

There is a bridge across the river but no real road into the project, added Nix. The state has some plans to develop it but I think when they do it is important that commercial food production operators gets an opportunity to participate, because for commercial agriculture to succeed—especially anything for livestock—will require significant amounts of acreage. You aren’t going to find commercial operators willing to invest the amount of money it will require; there’s no road, no railroad, no power, so the price of the land needs to be such–and enough of it available–to support a sustainable commercial food operation.

At our same general latitude in Canada a lot of the farms are 10-, 20-, 40-thousand acres dedicated to a single product—Livestock, according to Nix, That’s a model that works. The Alaska model of 640-acre plots for ag land is not a successful model for a large livestock commercial operation. Alaskans need their legislators to engage and develop a mechanism whereby sufficient land is available to attract the amount of investment it will take to produce this product we say we want to produce.

When you have two legs of the stool it is a lot easier to get the third leg, continued Nix. If you have the market, and you have the product, all you need is the infrastructure. We have to solve that problem.

Where can this Happen?

Four decades ago former Nenana mayor, state senator, and Lt Governor, Jack Coghill was among the group who began the push for access to the rich natural resource area west of Nenana known as the Totchaket. In 2008 construction began on a road to the Nenana River and a bridge over a nearby slough. But seven years and $9 million later, the project ground to a halt at the riverbank. Pilings had been sunk into the riverbed, but the city had run out of money to build the bridge and the state had stopped funding the project. Two years ago the local Native association stepped-up to help finish it and July 6, 2020 a celebration was held for the new bridge.[2]

Local leaders hope the bridge over the Nenana River will boost the area’s economy through land sales and resource development, and provide more access to hunting and fishing, according to this report. Some 148,000 acres of
state ag land will also be ready for development with sale beginning in 2022. How that land is distributed should be a major concern to the coming Alaska Legislature. 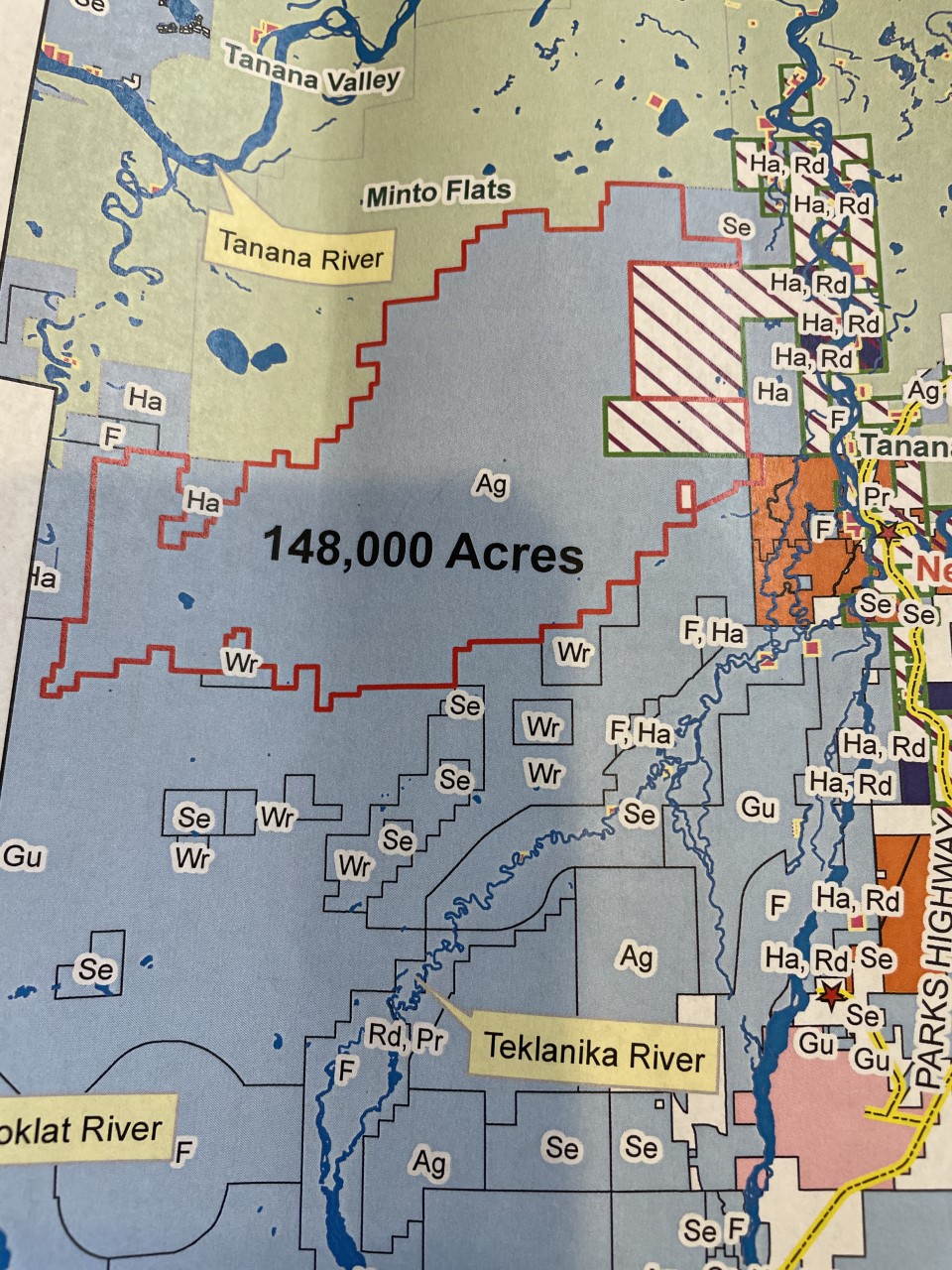 Some small farms are needed in an area like this, explained Nix. We need a community to establish an agribusiness; that’s what I like to call it. It’s not just an agriculture operation, it an ag business. An ag business for livestock includes everything from growing your own feed, to feeding your own animals, to slaugh-tering your own animals to putting them on the market. Alaska needs big, commercial ag businesses that have enough land to graze the animals, to finishing the animals. They must be able to do all the business required. You could put several large farms like that together and I think they complement the small
farmer, the 20-acre farmer or the 40-acre farmer.

Among the resource development options to make more money at Totchaket, what could be better use of this newly available land than to feed Alaskans?

We need to recognize, if you want protein for Alaska you are going to have to make a place for it, or we will never be able to expand, said Nix. Farmers need acreage to allow cattle
to graze, they can’t afford to feed them every day. They need land that develops an intrinsic value with infrastructure and food production. This investment by the State will increase the value of the land by causing communities to develop.

This challenge will be on the plate for newly elected Sen. Robert H. Meyers, Jr. of Fairbanks/Salcha and Nenana Rep. Mike Cronk from this region, along with Sen. Click Bishop, hopefully beginning this coming session. They won’t have any baggage from past legislatures–where the majority circled the wagons and fired inward. This is a project all Alaskans will realize benefits from for the next century if infrastructure construction can be started now. 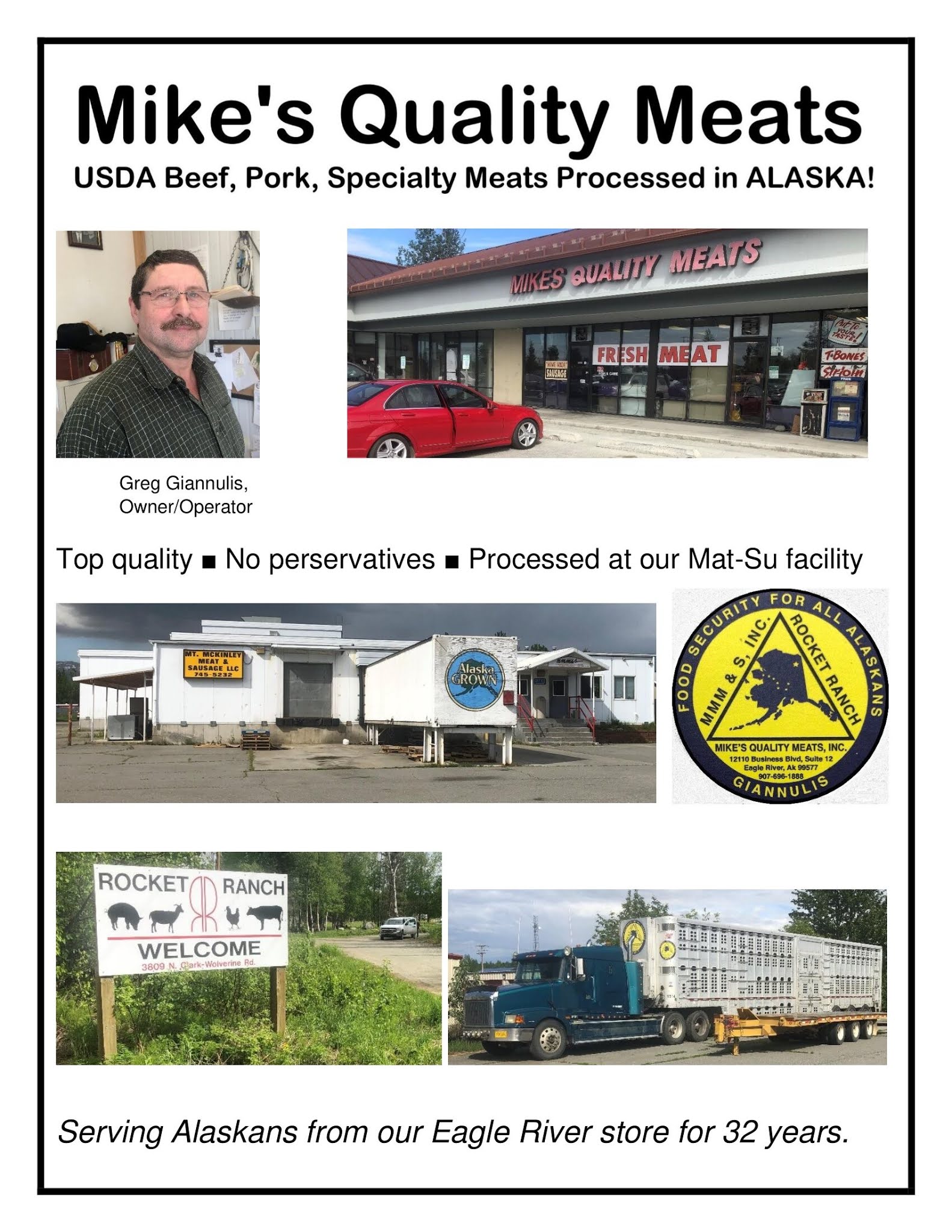 Nix continued: The mechanism for a true ag business may appear to lose money at first but it could be done with production credits or something like that. We need some way to solve the problem of allowing a big business to come in and invest in the infrastructure necessary to provide livestock food security. Without knowing their investment is secure big investors won’t do it, and without a plan we cannot do it.

Since the 1930s Matanuska Colony Project, an agriculture community has developed in the Mat-Su/Delta breadbasket of Alaska. That community is also doing all it can to develop youth to carry on agriculture traditions while diversifying the gene stock of Alaska livestock.[3] 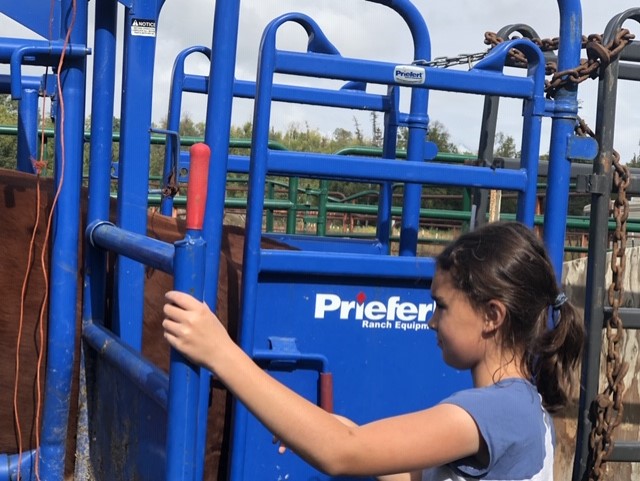 Over recent years Alaskans have taken steps to develop agriculture with gardens, and farmer’s markets and associated activities, but the demand for beef and pork is too great to supply solely in-state.[4]

The Alaska Division of Agriculture in mid-January announced a new “micro-grants for food security” program, funded by a $1.8 million appropriation from the 2018 US Farm bill placed by the Alaska Congressional delegation. The goal of the program is to increase the quantity and quality of locally grown produce through specialty farming funded by small grants.

Another critical area for increased agriculture production can happen in Southcentral Alaska with investment in infrastructure on land between the Little Susitna and Big Susitna Rivers. Known as the Fish Creek Management Area, the Mat-Su Borough owns about 8,000 to 10,000 acres of good agriculture land here. North of that the State owns some land as well.

A study by the state, called the West Susitna Access Project, has brought attention to this area.4 The Legislature needs to consider funding this agriculture project, not just the big project going on there for resource extraction. With a road into the borough land another 8-10 thousand acres extending over to the Big Su becomes available. 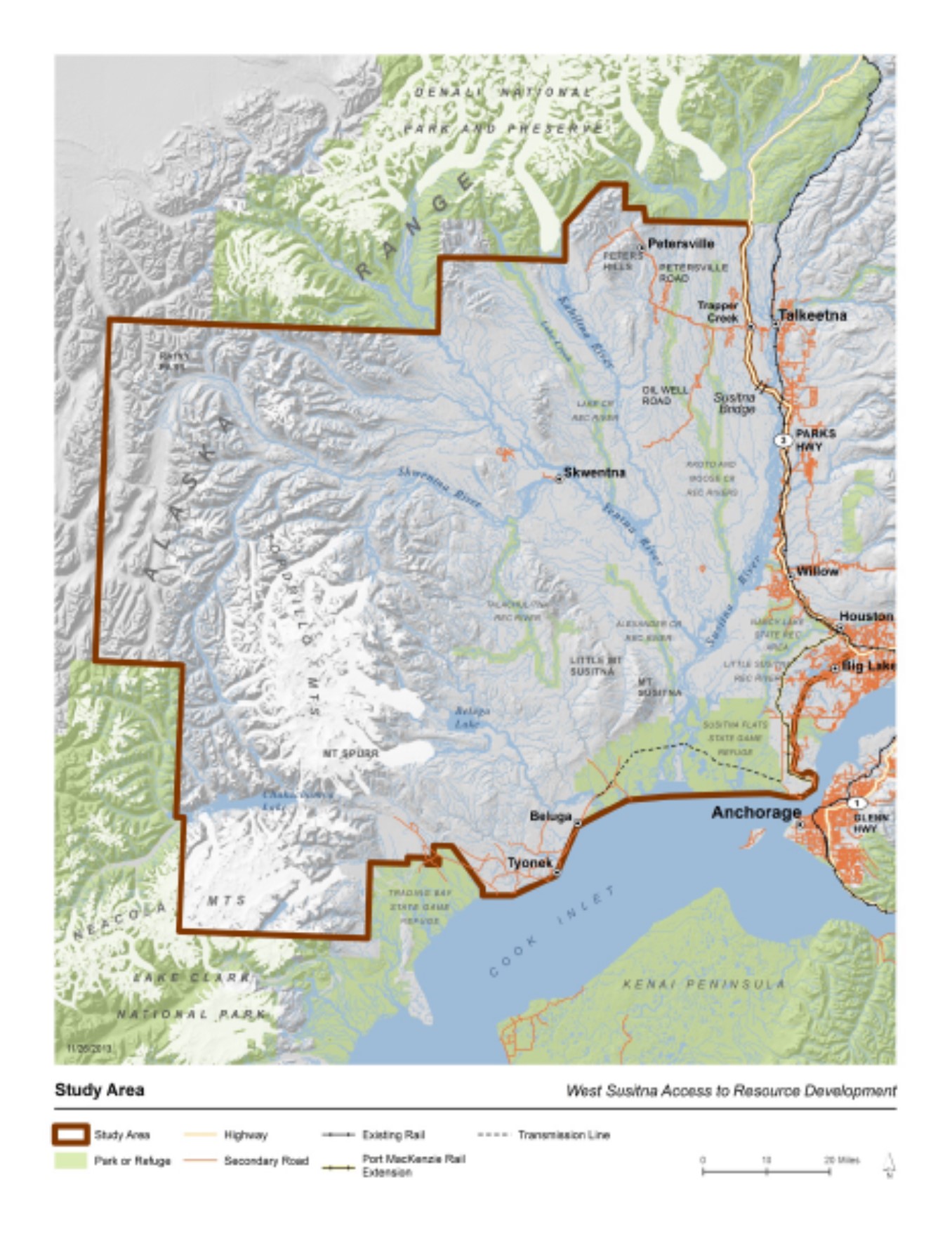 While nearly the size of Vermont, the Study Area has a diverse natural resources base. These natural resources include hardrock minerals, placer gold, coal, oil and gas, forestry/timber, agriculture, alternative energy options, and recreational resource opportunities, such as sportfishing and hunting. Surface access to most of this area, however, is minimal or non-existent. This study aims to identify locations that may benefit from a proposed surface connection and evaluates the potential access routes.

The objectives of this study report are to:

• Identify one or more potential crossings of the Susitna
River.

They developed the plan for what was originally called the Fish Creek Ag Project back in 1982, Nix continued. It changed over time and went in a different direction. At the Borough we changed it back to identify those ag parcels that are important for the Southcentral Region because there aren’t many more. We also talked about those (state) parcels on the other side of the Big Su, they are important, too.

Mat-Su area legislators, and a governor from the Mat-Su, could do something really important in the coming session for the benefit of all Alaskans. Availability of Alaskan- produced food enough to sustain all residents is something worth working for.

We’re doing what can be done,concluded Nix. We can haul livestock in, or we can bring meat in boxes, but when the boxes aren’t coming and the trucks aren’t running–as happened in the pandemic–what do you do then? Some grabbed toilet paper! Frankly speaking, toilet paper was the least of MY worries.”

[3]Who Dares to Farm in Alaska?

[4]Who is Making a Difference?