The latest financial study is in. It brings good news to the communities of Chugiak, Birchwood, Eagle River, Eklutna and Hiland Road in the goal to form their own local government. The study, conducted by Northern Economics, shows there is more than adequate tax base for a new city to be born.

It is not easy to be in charge of your own destiny; many people seemingly float through life and let natural events determine where they end up. Persons born into poverty may find the forces of a cruel world unbearable, put still they continue to produce offspring who must endure the same circumstances in their lives. By contrast, persons born into wealth may easily take their bounty for granted.

This is the fourth attempt by the people of Assembly District 2 (AD2) to form a local government. They say the recently released first part of a study considering economic possibilities for doing that are encouraging.

This report says there is a good foundation for establishing a local city; enough taxes available to provide for our community government needs, but not necessarily creating more taxes, explained Eaglexit spokesman, Dan Kendall. There are three parts to the first financial study and this is the first part.

Dan can be contacted at: kendall.eaglexit@gmail.com

Statehood advocates, who created the Alaska Constitution in Fairbanks during the winter
of 1955-56, wanted to take charge of our state’s destiny as had the founders of the United States of America during the 1770s. As a result, our state constitution has a number of enlightened provisions, including:

All political power is inherent in the people. All government originates with the people, is founded upon their will only, and is instituted solely for the good of the people as a whole.

These are core principles of our Alaska government. These are not empty promises. Inherent in them is the responsibility of every one of us to monitor and participate in promoting representative government at the local level.

Another core principle of our constitution is simplicity in governmental structure.

The borough was thought of as a progressive, flexible variation of the traditional county by the founders, according to Gordon Harrison, who wrote the Legislative Affairs Agency book Alaska’s Constitution; a citizen’s guide.

We have only two forms of local government under the constitution, borough and city.

Harrison explained: (The delegates) realized that the vast differences across Alaska—differences in population distribution, concentration of taxable wealth, tradition and experience with local self-government, and so on—would require variations of the city and borough government. Thus Article X leaves to the legislature the task of giving specific content to the basic (if not to say abstract) constitutional scheme of borough and city government.[1]

This section provides a strong presumption in favor of local government in Alaska.
When oil companies sued on numerous grounds to block formation of the North
Slope Borough, the Alaska Supreme Court was bound by the constitution to uphold
the formation of new boroughs whenever the requirements for incorporation have
been minimally met (Mobil Oil Corporation v. Local Boundary
Commission, 518 P.2d 92, 1974).

The Alaska Constitution encourages formation of new boroughs. Arguments offered against detachment of AD2 usually circulate around the cost of replicating what is being done by the Municipality of Anchorage (MOA), not over whether it is a good idea to have government closer to the people being governed.

A year ago I wrote for Must Read Alaska about the prospect of Eagle River and neighborhoods north within the Municipality of Anchorage detaching from the over-extended MOA: Is Eagle River Ready for a Divorce?

As a resident of Eagle River who has lived many years in one or another part of Anchorage, I found this idea novel.

“Kind of like a thinking about a divorce while you can still talk to each other,” I wrote.

In that story and another in November, Eaglexit Overview I detailed the fiasco when Eagle River previously pulled out of the MOA, and what has happened since as the local government has become ever larger and unresponsive to the kind of neighborhoods from JBER north, compared to those in the Anchorage bowl. In 2007 the Muni had com-missioned a study that determined that the MOA would experience little to no
significant economic hardship as a result of detachment and that there may even
be a reduction in costs for the Muni from shedding this portion.

I wrote then: This is because some budget categories for 300,000 people will likely not be shared with a municipality of 50,000.

Michael Tavoliero, expanded in that interview on the nature of AD2, with that population of about 50,000 people generating an estimated $57.5 million in annual property taxes.

With the benefit of hindsight since unification, many community leaders say the deal
hasn’t been what it was cracked up to be and residents will be better served by forming a new local government for the this area. The recently released Phase 1
analysis study conducted by Northern Economics, Inc. provides support for the idea of independence by evaluating income expectations. General government revenues include taxes on real property, personal property, motor vehicle registration, fuel products, motor vehicle rentals, hotels and motels, tobacco, and marijuana as well as non-tax sources such as charges for services, grants, and other entitlements. Annual revenues derived from Assembly District 2 (AD2) could range from $62.2 million to $66.4 million, representing between 11.8 and 12.6 percent of total current MOA general government revenues. 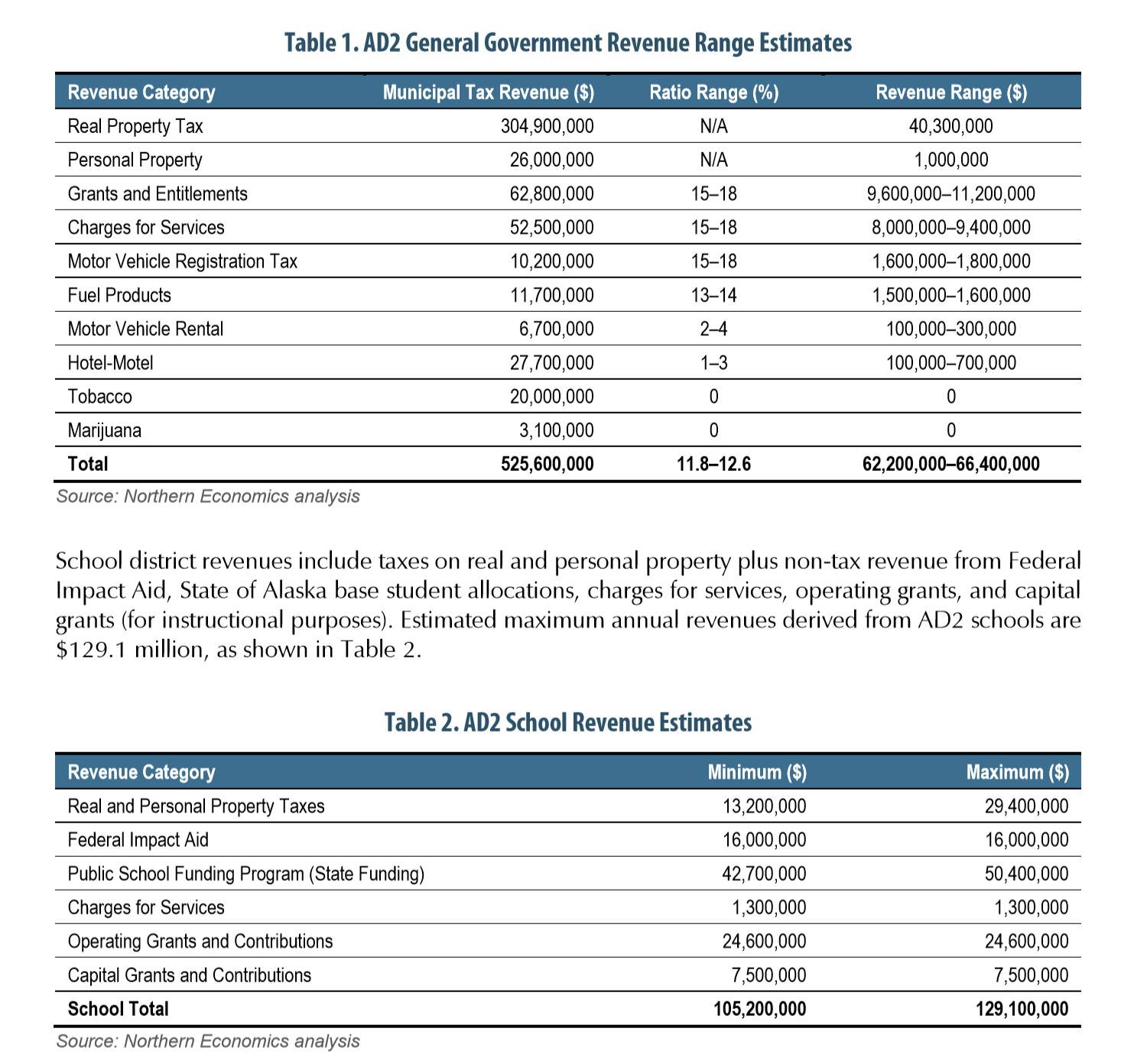 These are admittedly good times numbers and the study team at Northern Economics states in this report that growth potential for our region of the MOA is ahead of other areas. Revenues are expected to be flat or slightly down due to overall state economic conditions at this time and the loss of Alaskan jobs causing out-migration. However, the study speculates both revenues and costs may be expected to increase in years ahead.

These estimates were all made prior to the economically debilitating Cronavirus pandemic,
but MOA 2018 Revenues are detailed in this chart.

The report details where these revenues come from with individual charts listing dollar amounts by category documenting both taxable values and past Revenue provided. It also reveals that Anchorage drivers have paid $13,707,460.50 for motor fuel (gasoline or diesel) during the 12-month period from March 2018 (when the tax went into effect) through February, 2019.

Additionally, while the 2019 Anchorage School District property tax rate for both real and personal property was 7.16 mills across all tax districts, the estimated maximum rate AD2 would be allowed to levy is 5.91 mills; a savings for local property owners having to support fewer area schools.

18 schools draw student populations exclusively from AD2. The following chart estimates Average Daily Membership (ADM) for those as well as three additional East Anchorage schools having overlapping boundaries. The resulting school budget, inclusive of local, state and federal formula funds, are estimated to be between $71.8 to $95.8 million. 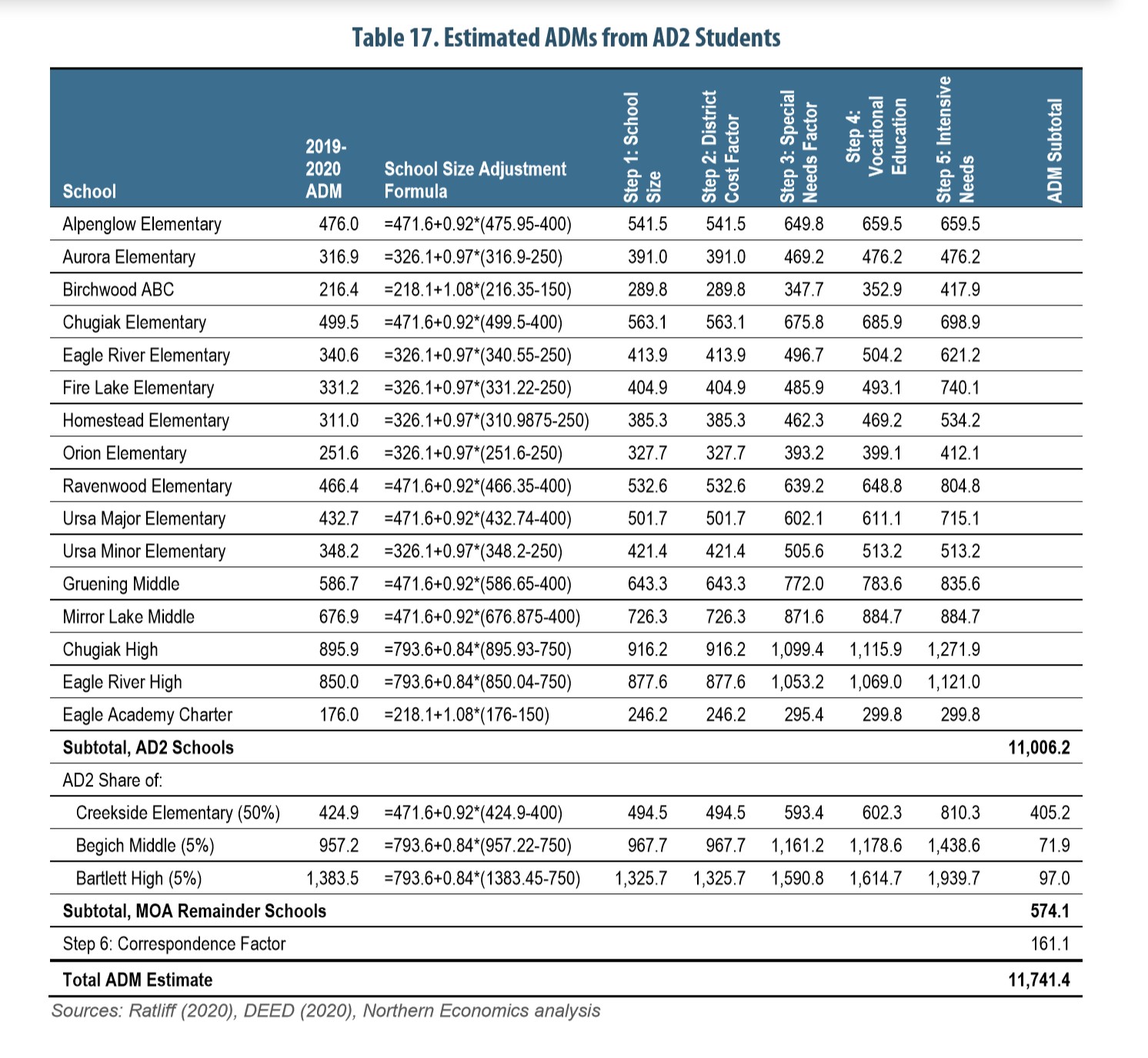 The report documents a range of possibilities for additional income. As local community activists examine the pros and cons of detaching from the MOA, the goal is more efficient and representative local government. Some believe this report reinforces the possibilities they have long known to exist.