Alaska has always had a tenuous economy, buffeted by winds of boom and bust. Most economic winds are generated by capacity for natural resource extraction. And, for more than 40 years, income from any other industry has been a bonus.

This fragile economic reality means government sector employees have security while private sector companies pay for government. By the end of 2019 the Alaska economy had continued to slide–after hitting a patch of black ice–when the
AFL-CIO and Alaska Dispatch News in 2014 convinced enough voters to elect Bill Walker as governor.[1]

Trends toward another bust were obvious then–even given our $66 Billion Permanent Fund–before the Chinese virus which paralyzed the world in early 2020.

The Chinese, who Gov. Walker wanted to partner with to build an Alaska gas line, have put all Americans into a fine kettle of fish. 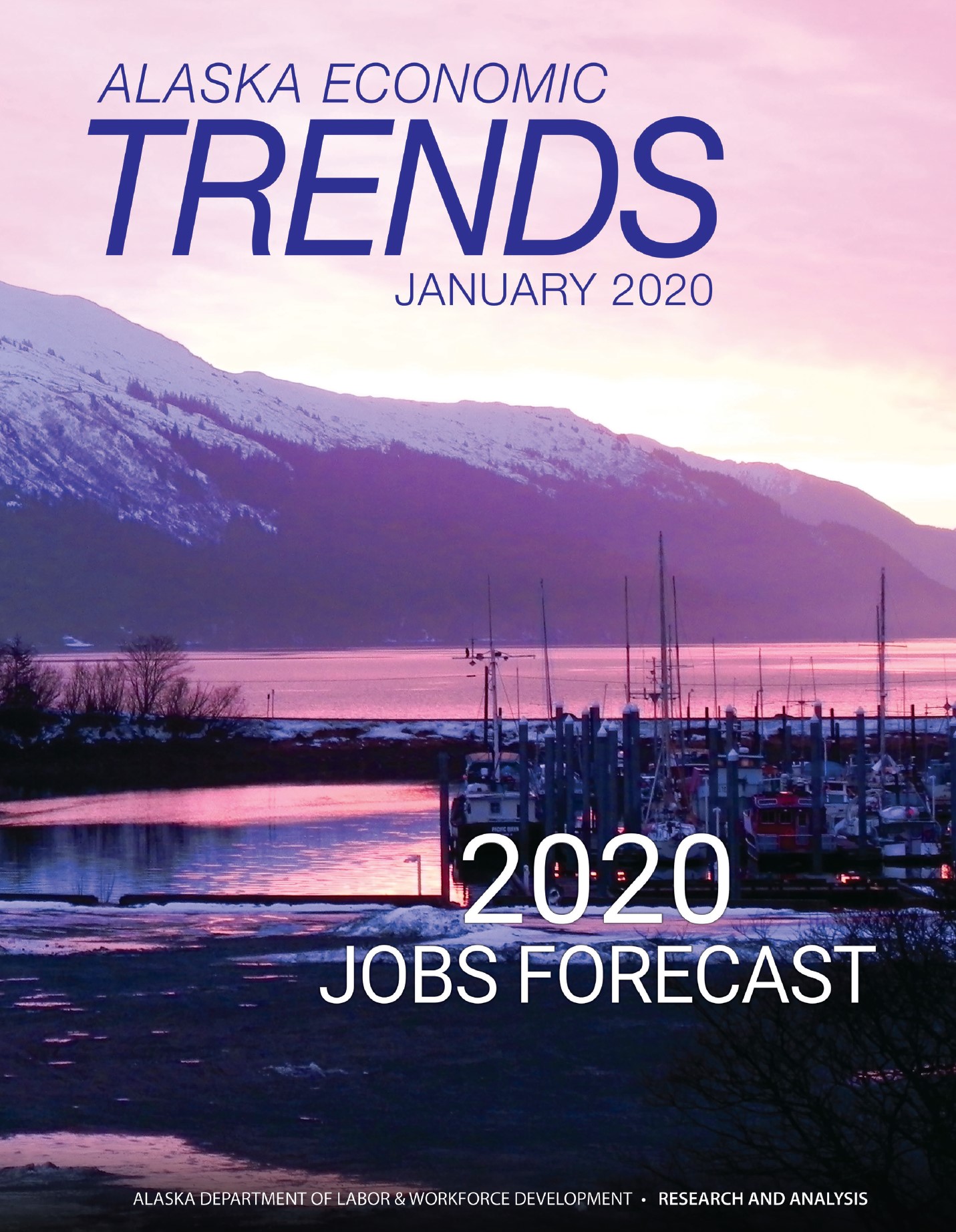 Some State workers at the Alaska Department of Labor and Workforce Development (AKLWD) have traditionally performed a valuable service monitoring essential population and economic data for publication in a monthly Trends
magazine, out of Juneau. I have been to the workplace cubicles–in a building dubbed the Plywood Palace–where state employees collect data under the guidance of professional economists, and predict the future of Alaska based on
past trends using computer modeling projections.

In January they established we weren’t doing so hot, nor was the Alaska economy projected to do much better in the coming year.

Alaska added about 1,600 jobs in 2019 after losing more than 11,000 during the recession of the prior three years, reported state employee Karinne Wiebold in the January Trends. We forecast that trend will continue this year, but at a slower rate of 0.3 percent, or about 1,100 new jobs.

Wiebold continued: While most industries’ growth will be tepid, record anticipated numbers of cruise ship visitors and the first wave of new military personnel at Eielson Air Force Base in the interior will be bright spots in 2020.

Outside economic forces were the hope for 2020.

Wiebold continued: Growth is the economic default. Without significant counter-pressure, growth is the default economic setting. Absent a major shock, Alaska will keep adding jobs in 2020, but a few conditions will keep recovery
sluggish.[2]

At this writing it in May and we know there has been a “major shock.”

Here is where we were economically at conclusion of our 60th year as a state: 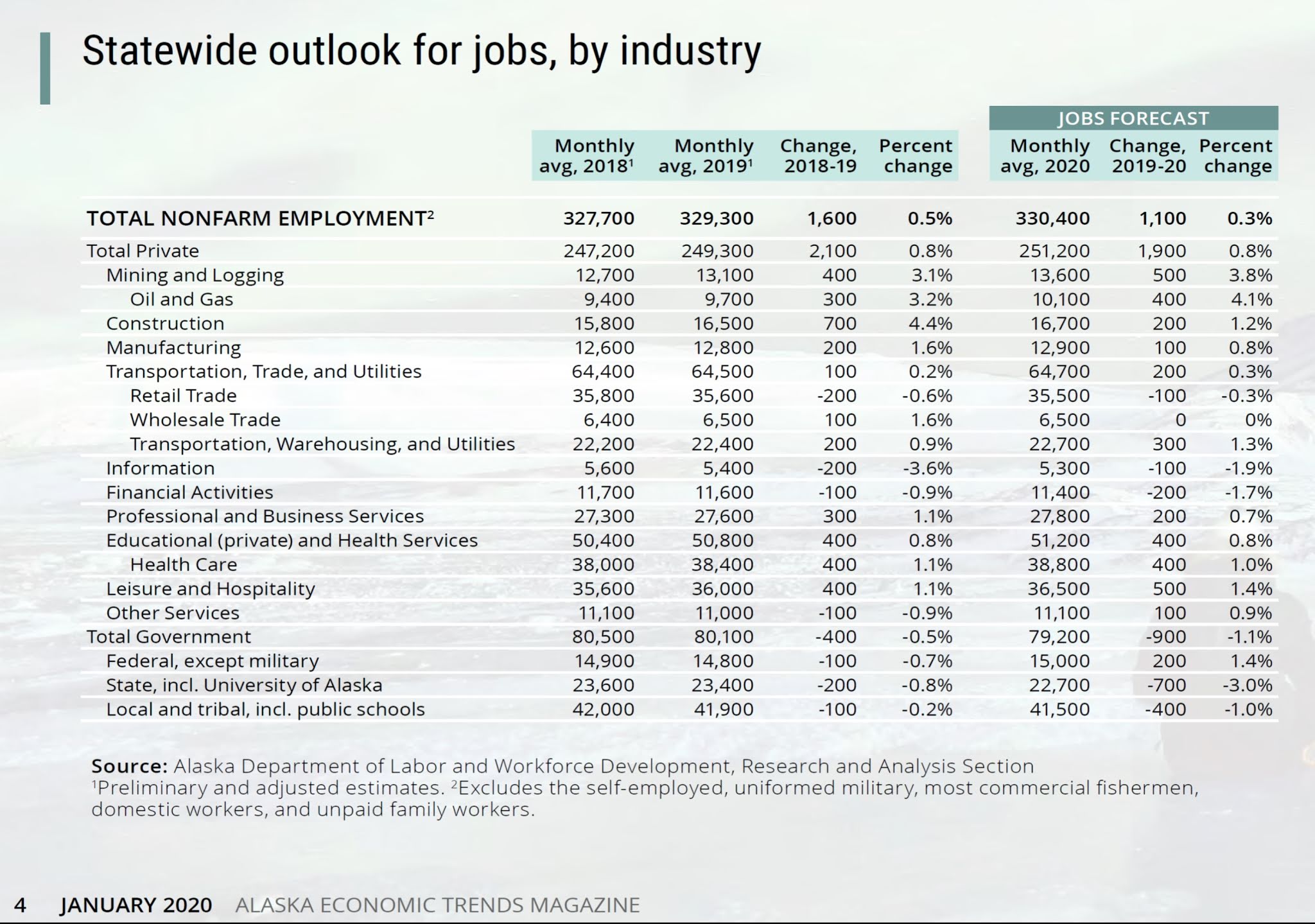 Private employment over Gov. Michael Dunleavy’s first year had inched up by 1,600 employees to 329,300. Numbers of local, state and federal government workers had been reduced by about 400, to 80,100 total.

Those people who were here to get rich–in the now 43 year oil boom–have mostly gone home; those of us who will continue to remain through winter after winter are again maximizing our production during long summer days in preparation for a glorious future. We know the politicians we elect in districts around the state go to backwater Juneau and work for the special interests, but that’s the price we have accepted for low population and the considerable personal freedoms we enjoy.

So, if Alaskans deserve better we must know the facts about our economic potential.

In February the AKLWD team of Sara Whitney and Liz Brooks reported on Alaska Population Trends: Alaska’s population decreased 0.4 percent from July 2018 to July 2019, our new estimates show. The biggest drivers include a decline in the number of people moving to Alaska and fewer births.

Further:
While this was the third straight year of overall population loss, the declines have been small. Over those three years, Alaska’s population fell by a total of 1.2 percent. The state’s 2019 population of 731,007 is about 8,600 below the peak of 739,649 people in 2016 (coincidentally the middle of Bill Walker’s single term as governor)[3]

How does that stack up with our historic population trends? 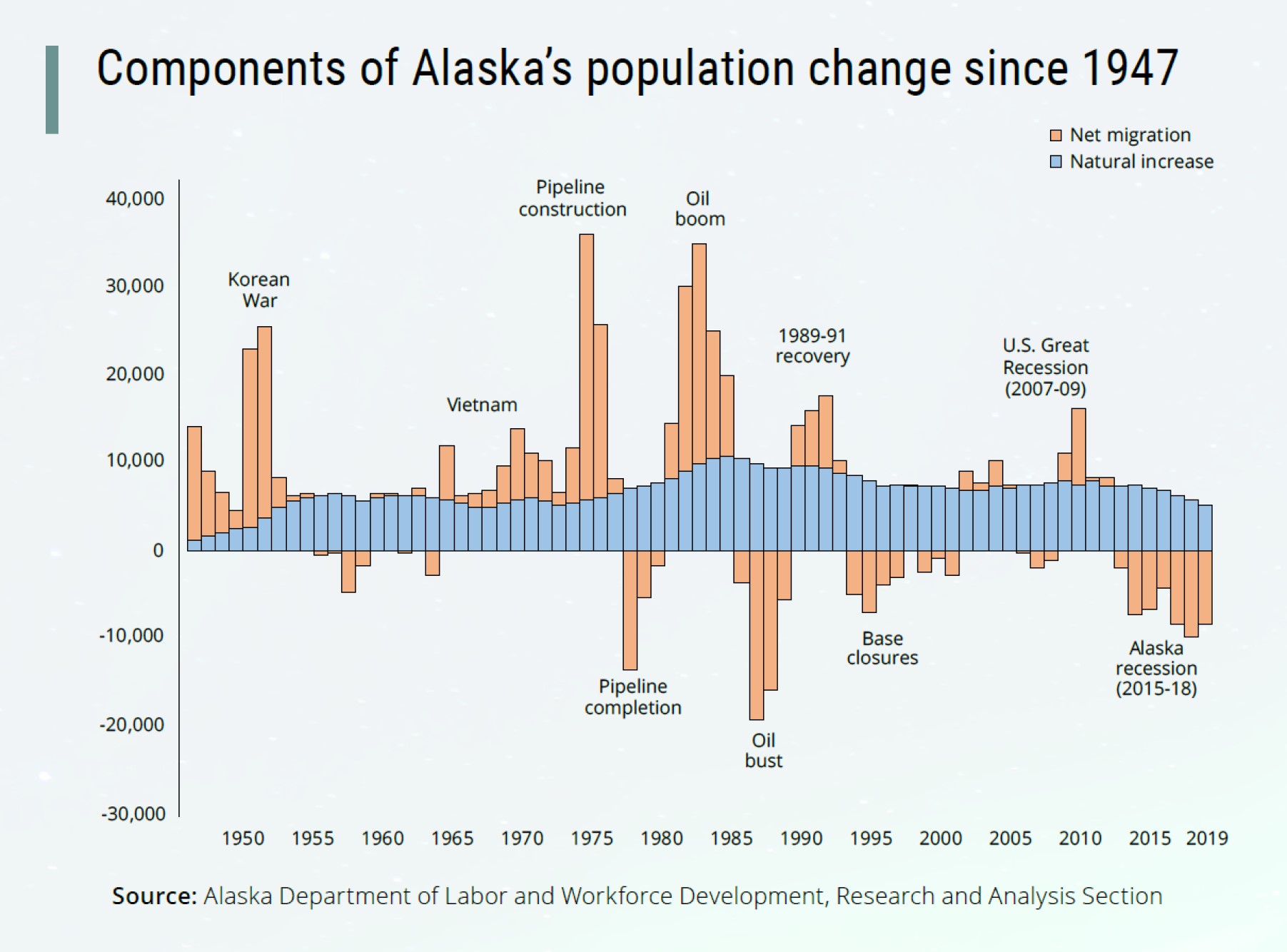 While 2019’s population decline was mainly a continuation of longer-term trends such as ongoing migration losses and population aging, the sharp drop in births was a notable change. The number of births in Alaska has fallen 15 percent over
the last three years. 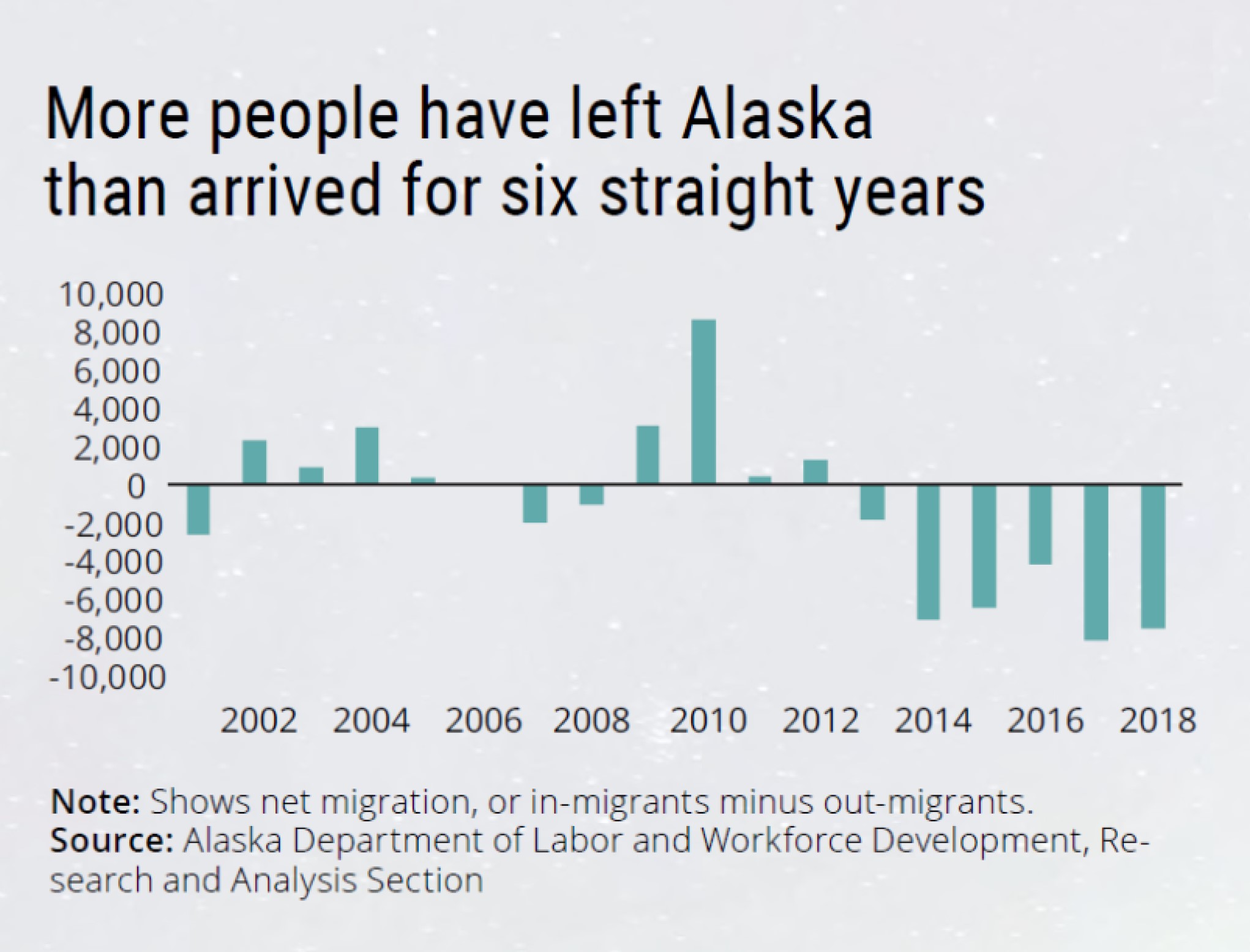 Population decline has happened on two previous occasions since statehood.

According to the same February Trends publication:  Alaska’s population decreased, as more
people left Alaska than moved in for a seventh straight year. Net migration —in-movers minus out-movers — was -8,300 in 2019, similar to the prior years’ losses.

Speculation that more people were leaving the state was common in recent years, but while it might seem counter-intuitive, the opposite is true. Fewer people left Alaska last year than we’ve seen since 2011 — but drastically fewer
moved to the state than is typical.

Perhaps staying home and watching Alaska reality television is better than coming here when you know Alaska’s economy is in decline.

In March the DOLWD Trends publication ran a story declaring Total Wages up 4.7% in third quarter.

Growth is from same quarter in 2018; average wages are also up

Alaska employers paid $4.9 billion in wages during the third quarter of 2019, an increase of 4.7 percent from the same quarter the year before. Private sector wages grew 5.4 percent over the year and government wages increased 2.5
percent.

In Alaska’s seasonal economy, wages and job levels are at their highest levels in the third quarter of each year, making third quarter data especially relevant to assessing the state’s economic direction.

This chart shows where we were headed: 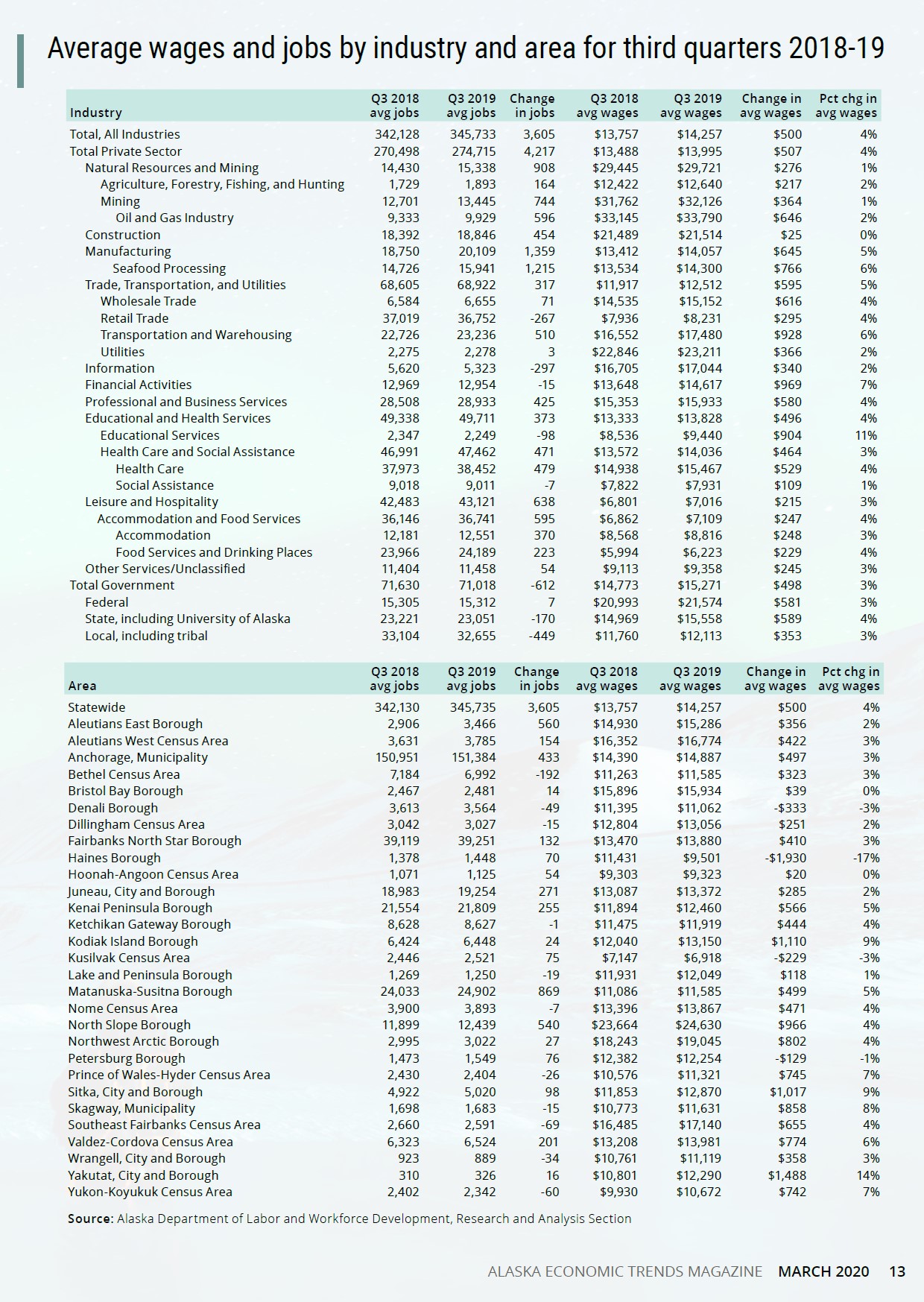 ven what you are trained to do, and where you live in Alaska, this chart tells whether you can afford to live here.

In April everything changed. The DOLWD Research and Analysis Staff generated a Trends publication speculating on economic possibilities with short-, medium- and long-term impact horizons. This is new black ice: Normally, Alaska employers would pay out more than $1 billion in private sector wages in April and even more in May. There’s little doubt that wages will fall by hundreds of millions of dollars over the short-term period due to virus-related shutdowns and efforts
to slow the spread of COVID-19.

Service industries have been hit hard and Alaska residents who lived paycheck-to-paycheck are trapped. State and local government workers are not losing their jobs but they can see the tsunami wave has headed out leaving
ocean bottom exposed and know it will be coming back with a vengeance.

From the Trends report: State and federal legislation has already been passed to help fill gaps in the economy and household budgets caused by lost wages. The objective is to quickly get money to those who have had to absorb the biggest initial losses and to help shore up the economy during the next few months.

State legislation has extended eligibility for unemployment benefits to people who had to stop working due to COVID-19. It also removed the requirement that people actively seek work to receive benefits, raised the additional dependent
allowance from $24 a week per dependent to $75 a week, and removed the limit on the number of dependents for which a claimant can receive the allowance. Normally, the maximum is three.

The state legislation, which will be in effect until April of 2021, also waives the normal waiting period for benefits and applies to all claims filed after March 1.

The result has been increased claims for unemployment 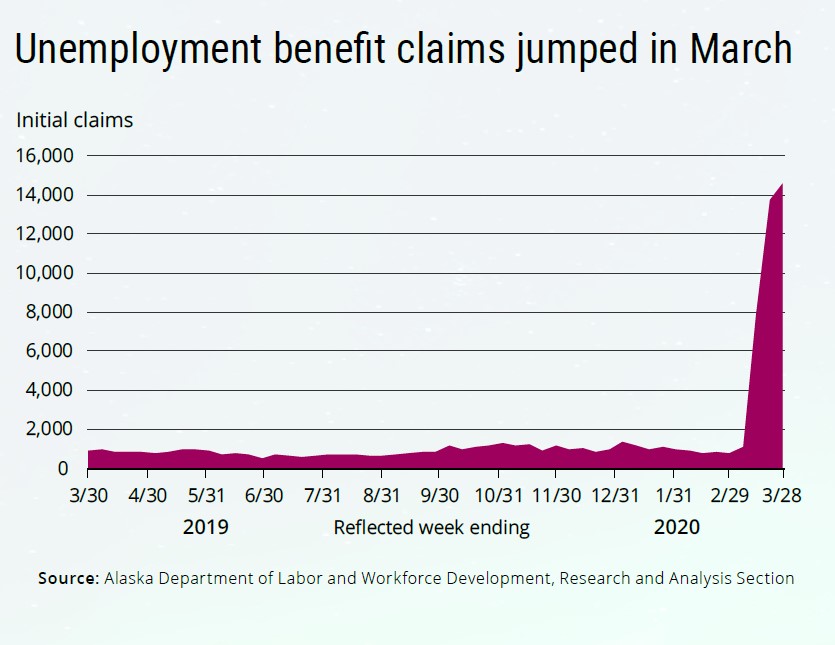 Our economy has returned to where it was before statehood; Alaska is rich but Alaskans are reduced to doing each other’s laundry with an expectation our elected legislators will not only refuse to abide by the law to provide statutory Permanent Fund Dividend payments, but also will find a way to tax producers if politically possible. The Permanent Fund is now in decline and Alaskans are invited to apply for unemployment benefits while they are forced to shelter in place.

For those who are able, it’s time to make babies.