The Municipality
of Anchorage is going to have another election on April 7, 2020 which
will be determined by a mail-in ballot. This is depressing on many levels; 1) the
low caliber of people currently holding a majority of Muni Assembly seats, 2) the
need to again hold the election at a time in April guaranteed to restrain
participation, and 3) the fact voters will receive a ballot in the mail and be
expected to believe a federal postal carrier will deliver it to the Muni for
counting–and it will be accurately counted.

This
election should be in November along with State and National elections. Why
isn’t it? 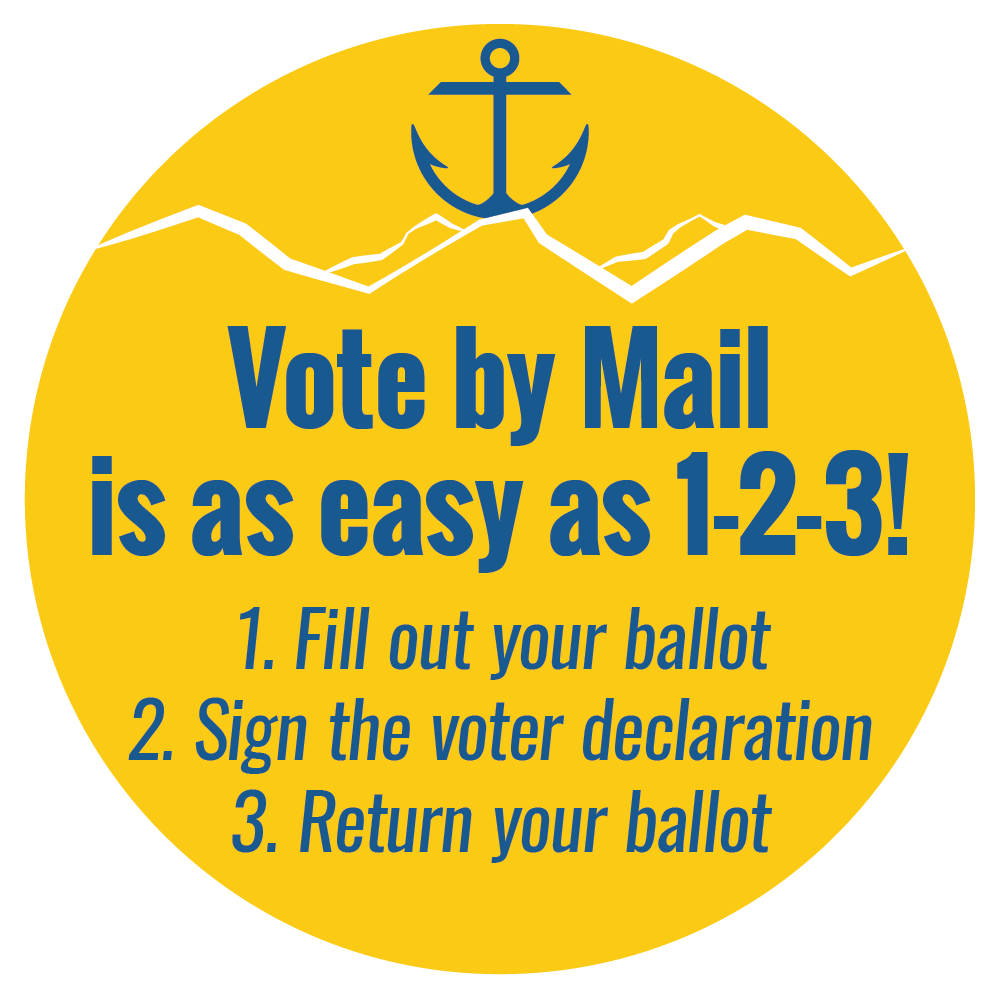 Instead,
Anchorage elections require a leap of faith. They are run as might be expected
in a Third World country where many homeless and destitute people are offered
as proof that property owners must pay more to the government for having their
quality life.

But my
dread is based on experience: I have seen first-hand how
elections can be manipulated–as an employee of a union of state employees. What
I witnessed was shameful and it could happen here. I have zero confidence in
the integrity of this election, although I have some hope for one of the
candidates from my Eagle River/Chugiak suburb of Anchorage.1 Others
are also running that I am hopeful about, but my community has a mere two seats
on the 11-seat Assembly and our candidates must be strong.

Jamie
Allard is the strong candidate among three running. She could
make the perfect force for Eagle River with the other current assembly person
from here, Crystal Kennedy. 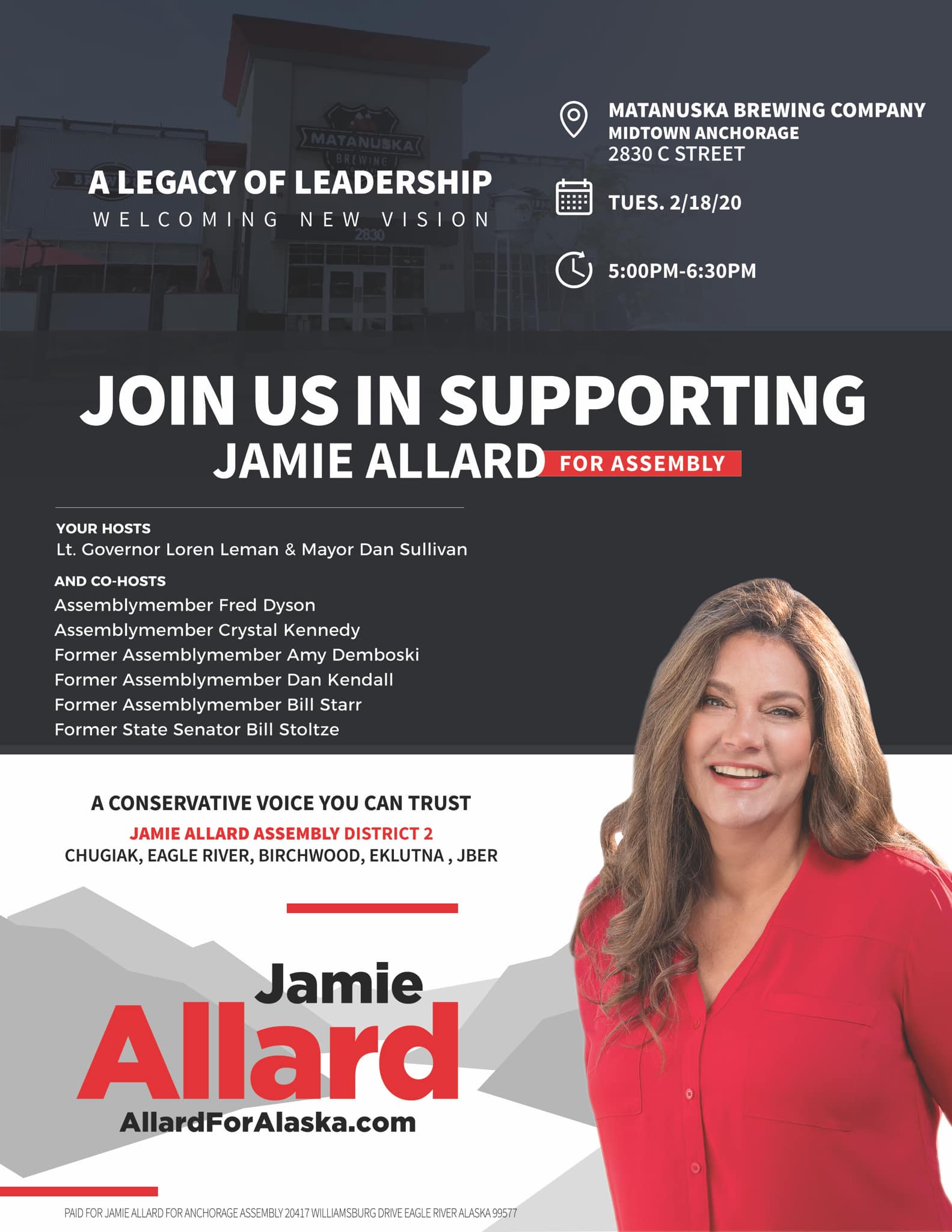 Our
election district includes Joint Base Elmendorf Richardson (JBER)
and Allard’s husband is military. A lot of my neighbors are active or retired
military. They aren’t impressed by blowhard politicians.

I first met Allard when she was running for the Alaska House of Representatives to replace Rep. Lora Reinbold, who ran for and was last elected to the Alaska Senate. Allard was a strong candidate in a three-way race and I expected her to win, but she lost.

“I was
disappointed at that loss,” explained Allard in a recent interview. “But I have
continued to be involved; I realized I can make a difference and I needed to go
forward. I had decided to run because I want a better place for my daughters.
When they go off to college, I want them to have someplace worth coming back
to.”

Family
is important to Allard. Her two daughters are in 8th grade at Gruening
Middle School, and 9th at Eagle River High School. 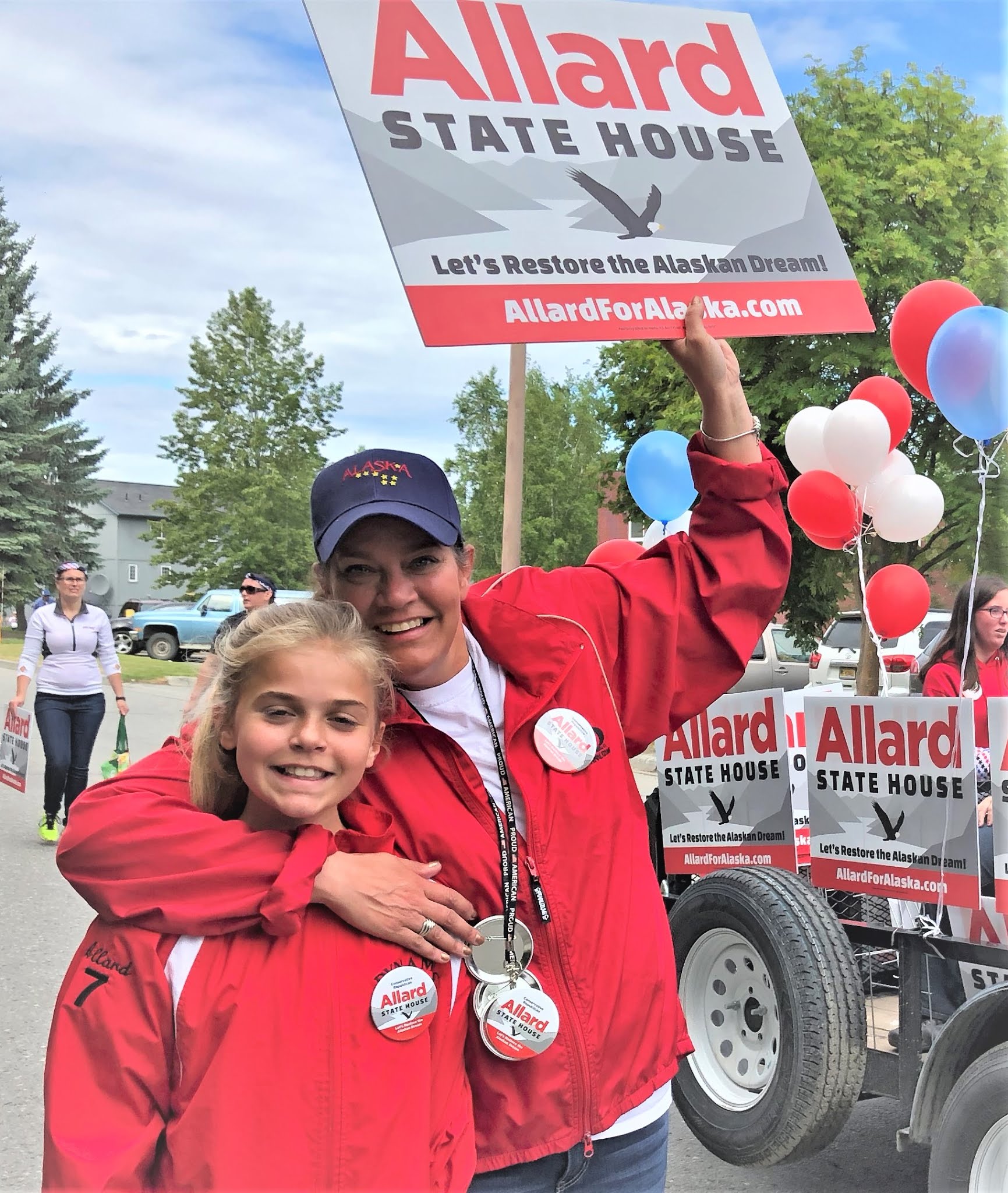 Allard
continued: “If I had said ‘I don’t want to do this anymore after losing the
House race, what message would that have sent to my daughters?”

For
background, Allard was in the military in the 1990s. She worked for the Allied
Supreme Commander in Germany and had an interesting career. “But,
because my husband is Special Forces, special operations, we hardly saw each
other,” she explained. “He was farther along in his career and we agreed that
one of us needed to support the other, because we never saw each other since we
were both always deployed.”

She
got out as a sergeant.

“His
career was much further along than mine,” explained Allard. “He had a lot of
responsibility and it meant a lot to have someone back home supporting him and
keeping the home fires burning. That was what I needed to do.”

Allard
didn’t just keep the home fires burning, she also had a position at the US
State Department working in 4-person teams to influence world leaders around Russia about the values Americans hold dear at top secret conferences over six years. Then she and her husband chose to live and raise their family in Eagle River.

Our
biggest issues here are “Crime, taxes, the homelessness that is spilling over
from Anchorage,” explained Allard.  “I
believe if we can enforce those laws that are already on the books we can
reduce the homelessness and rising crime in our communities.”

“The current Assembly is going to continue proposing taxes until voters
submit,” said Allard. “I don’t believe we need new taxes because they haven’t
worked hard enough to reduce our budget. We now have a $40 million increase in
the budget, which is a record high for the Municipality, and instead of putting
in the work to cut the budget all I saw them do is increase it.”

Won’t
that make you a lone voice on the Assembly?

“You
can be a lone voice and still make a difference,” Allard continued, “because
when you get the word out to the public they become engaged. They get angry
when they see what’s going on. So, if there isn’t anyone there to point out
what is going on, and declare “enough is enough,” then other conservative
people will not decide to run for the assembly.

“That
is what I am going to do to make a difference. I will fight the fight as long
as I need to if Eagle River elects me,” she added.

Allard
is reviewing the recently released Muni Internal Audit now.2 She acknowledges
she will have to trust the integrity of the Muni election. Another elected
official who lives in this area–who is now a legislator representing Chugiak
District 13–told me in 2017 in another interview, of her distrust of the local
mail-in ballot.

I
interviewed Sharon Jackson about the coming mail-in ballot in December
of 2017 for the ECHO Magazine, which refused to publish that
story.

As I
reported then:

The Muni
Clerk’s Office back then had this list of benefits of a mail-in ballot.
Now they simply list favorable news stories on the Muni.org web page:

Benefits
of Vote by Mail elections:

·
Increases transparency in the election process.

·
Uses technology to inform voters about the status
of their ballot.”

“Heck-of-a-deal,
huh?: No more having to plan your day around going to the polling place in your
district to vote. No more standing in line chatting with other responsible
voters there to do their civic duty. No more going into a booth alone and
marking your candidate and municipal spending priorities with a curtain closed
behind you. No more “I Have Voted!” sticker to encourage others to make that
same effort.”

“When I first got this (Municipality of Anchorage ballot)
in the mail I was shocked,” stated Sharon Jackson. “It took a little time to
wrap my mind around it, okay?”

Mrs. Jackson and her husband own their Eagle River home and
have lived in it 15 years. The person this ballot was addressed to moved out of
state 10 years ago and died five years ago.

“The scary part is she may have been voting in local
elections all these years!” exclaimed Mrs. Jackson. “If someone without
integrity receives something like this, what is to keep them from voting it?”

So, what do you think others having
integrity should do if they receive a ballot for the upcoming election in
the mail, Mrs. Jackson?

“They should definitely contact the Municipality,” she
said. “This is a new way to vote; there are no experts in doing it this way.”

A second mail-in ballot for the previous
homeowner arrived at Mrs. Jackson’s mailbox after this interview. She has
contacted the Municipality about it.

Since
then Mrs. Jackson has become a legislator, appointed to District 13 by Gov.
Michael Dunleavy–after the candidate who won that election Nancy
Dahlstrom decided to not take the seat she was elected to in November–and
instead accepted a job as Commissioner of the Department of Corrections.
Rep. Jackson will have to run for re-election and fortunately the State of
Alaska does not have mail-in ballots.

Elections
are a sacred trust. When I personally worked as a business agent
for a union, elections were a way for some to protect self-serving interests.
Those elections featured mail-in ballots, sent out from the organization to
everyone who is listed on the roll as a member. Voters in those elections
simply took out a ballot card from the envelope, marked it and placed it into
another unmarked envelope, before then mailing it back in a business reply
envelop with their name and return address written on it.

In
this kind of arrangement it doesn’t matter who gets the most votes; what
matters is who separates and counts the votes from returned business reply
envelopes with individual voter names on them.

In
addition to Jamie Allard, other local candidates for the Anchorage Assembly
who I would vote for (if I could) in the coming election are: Christine Hill,
District 4, Seat G, Midtown; and Rick Castillo, District 6, Seat K, South
Anchorage. I don’t know enough about the others running to advise on who to
vote for. As the largest expenditure of the Anchorage Municipality, the Anchorage
School District also has two candidates for ASD School Board the
upcoming election. I recommend voting for Dave Donley and JC Cates in
those areawide races.

Anchorage
is long overdue for a political realignment and this election could be a start. If you agree, copy this link and send to your friends: