There have been times when Alaska politics were entertaining, candidates knew every vote counted, and campaigns could take on the atmosphere of a circus. Many were especially amused when die-hard Republicans, Can-Do Wally Hickel and Jack Coghill ran for governor/lt governor as Alaska Independent Party (AIP) candidates and won!

For background: Alaska’s statehood convention knew Natural Resources had
to be developed for an economic base. The point was made early by Alaska’s
delegate to Congress, Bob Bartlett, in his key note speech to the delegates:
…fifty years from now, the people of Alaska may very well judge the product
of this Convention not by the decisions taken upon issues like local
government, apportionment, and the structure and powers of the three branches of government, but rather by the decisions taken upon the vital issue of resource policy.

Everyone seeking statehood believed disposition of resources had to be done right. More than 60 years later we see the wisdom of Sen. Bartlett’s words as our $66 Billion Permanent Fund from oil revenues becomes a political target by some politicians.

Gordon S. Harrison further explains importance of Natural Resource consideration in Alaska’s Constitution, 4th Edition:
Thus, the convention delegates sought to enshrine in the state constitution
the principle that the resources of Alaska must be managed for the long-run
benefit of the people as a whole—that is, the resources of the state must be
managed as a public trust.  They did not attempt to write a resource code; rather, they sought to fix the general concept of the public interest firmly in the resource law and resource administration of the state, as well as in the consciousness of Alaskans, so it would not be subverted through the indifference or avarice of future generations.1

The founders were looking to the future. Among the states of the United States Alaska’s constitution is unique with its emphasis on “utilization, development, and conservation of all natural resources belonging to the state, including land and waters, for the maximum benefit of its people.” (Article VII-Natural Resources-Section 2) 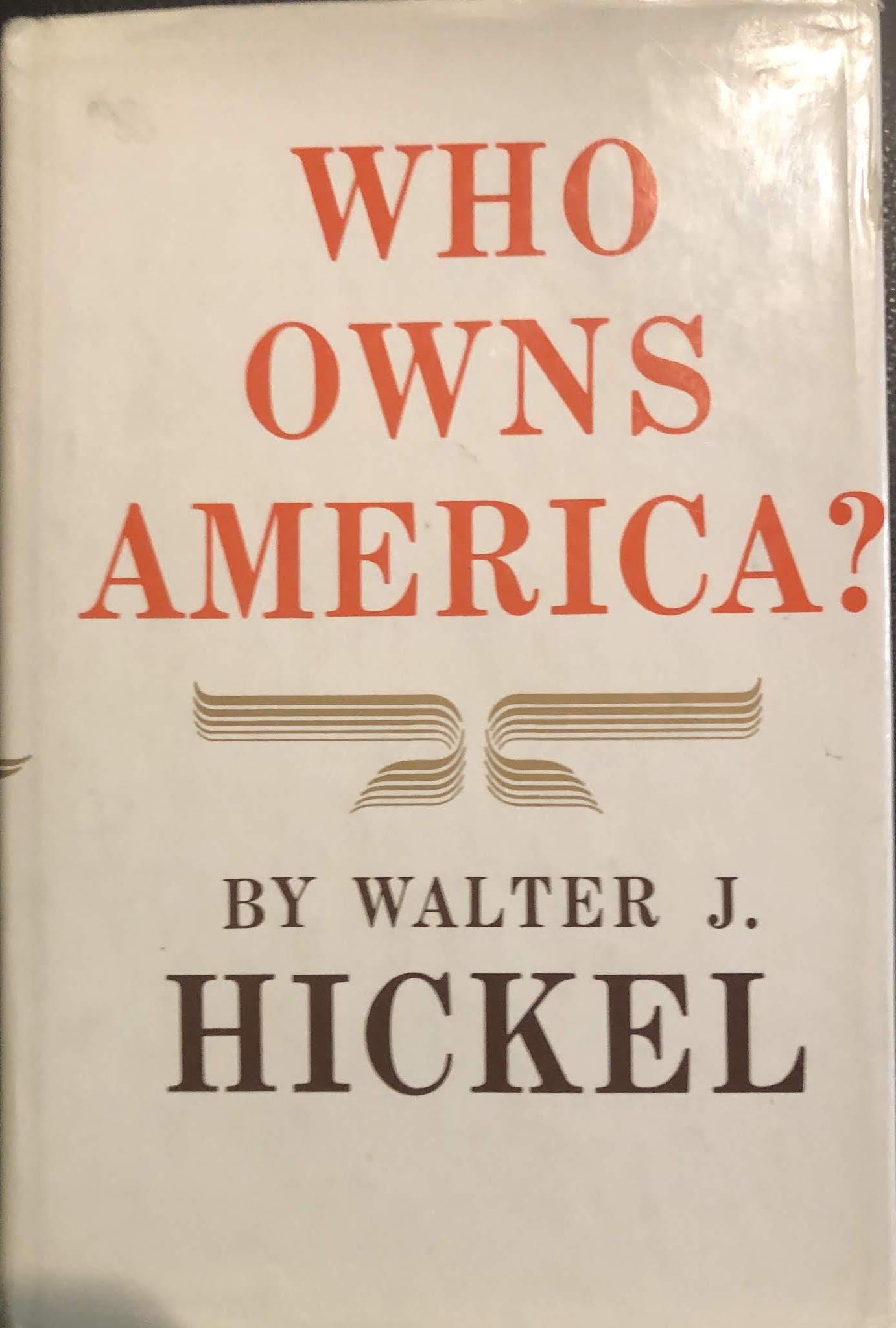 Can-Do Walter J. Hickel popularized this concept, describing Alaska as “The Owner
State” in his 1971 memoir “Who Owns America,” written after being fired by President Richard M. Nixon as Secretary of the Interior:  The public must demand that government face the fact that it is in business. The president’s Cabinet is the board of directors for the largest company in America. Its stockholders are 200 million Americans.  The poorest ghetto child has as much stock interest in the Continental Shelf, for example, as the president of any large company. He is an owner. The great rivers are his, as are the lakes and millions of acres of rugged beauty from Cape Cod to the Redwoods. These are not for anyone’s private exploitation. This does not mean that they will not be used privately, It means that they will not be abused privately.2

Stock in this company is set by citizenship but the economy determines the stock’s value. Hickel also famously said: “You can’t just let nature run wild,” and on another occasion “every Alaskan is an environmentalist.” He was capable of glorious contradictions.

While Alaskan resource ownership was specified in the state constitution, Hickel believed it extended to the entire nation through our parks and national heritage institutions. But Hickel was also controversial in Alaska. His successful campaign for governor in 1990 was a circus. The media mocked him as Hickel and Lt. Gov. Coghill, (one of the constitution signers who had formerly declared himself “Mr. Republican”), won election to office. Like two porcupines, once elected they distanced each other.

“Alaskans have brought back from the past one of the biggest drillin’, sawin’, digging’, dreamers in all this big, wild state to be their governor,” declared John Balzar, reporting in the Los Angeles Times, February 7, 1992. “He
has just finished this first year in office, trying to lead the charge toward
his grand vision of another free-spending development boom for oil, minerals,
timber, railroads and highways.”

No mention of seceding from the United States, which was in the AIP platform.

“Hickel, champion of the great Alaska oil rush at Prudhoe Bay, the political wildcatter who promoted the colossal Alaska oil pipeline, flamboyant Wally Hickel who stood up to Richard M. Nixon, the hard-hewn Hickel who made himself a millionaire out of 37 cents in pocket change, is today, at 72 smack up against a different dream for Alaska—the dream of preserving it against the large-scale development he champions,” continued Balzar in that story, reprinted in the Juneau Empire on the same day in 1992.

Hickel is further described by Balzar as: “…a champion of states’ rights, a ho-hum politician and the operator of the best hotel in Anchorage.” Of course that is the Captain Cook Hotel.

“Late in 1990, on the day before the registration deadline, Hickel strode out of the shadows as an independent third-party candidate,” wrote Balzar. “If he could not command a majority of Alaskan voters behind him, here was an exploitable alignment of political forces: The Republicans and Democrats nominated moderates who wore  the drab grays of consensus politics.” (Sturgulewski/Campbell and Knowles/Hensley)

Balzar continued: “His dreams remain as wide-eyed and unshakable as a young Klondike prospector’s:
Push roads through national parks, drill for oil in wildlife refuges, cut more
timber from the vast national forests, activate a gigantic gold mine in the capital, build another pipeline from the North Slope—to carry natural gas. Bigger ports, longer rail lines, more and wider highways—these, too, are in Hickel’s big dreams.”

Then there is the pugilist Hickel: 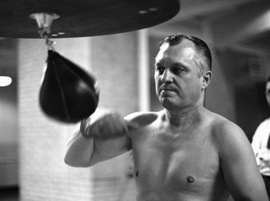 “What some idealists don’t realize is that the color of the environment is not just
green. It is real. A person who is cold, hungry and unemployed is in an ugly environment. Poverty is the worst enemy of the environment. My question is,
what has the Sierra Club ever done for the poor?” Hickel said.

Walking the walk, Sec. Hickel was the first ever to use the Endangered Species Act to try and save an animal–whales.

Balzar also pointed to oil companies financing 87 percent of the budget of the richest state government in America–six times the per-capita spending of other states. As governor, Hickel contributed to our state’s wealth, securing a $1.1 billion cash settlement just three years after the Exxon Valdez oil spill, avoiding an epic court trial. (The battle over the Amoco Cadiz spill in France in 1978, by contrast, was still being waged in U.S. Courts. It happened when the supertanker Amoco Cadiz, foundered off the coast of Brittany to produce
Europe`s worst oil spill. That claim settled in 1988 for $85.2 million.)3

Hickel honored the law regarding distribution of Permanent Fund payments to Owner State residents under the original formula. His further accomplishments as governor the second time are detailed at alaskahistory.org as follows:… negotiating and collecting a number of tax settlements with oil companies, including a $1.4 billion settlement with British Petroleum (BP), the largest in state history.  A number of lawsuits were filed against the federal government to assert state rights.47  He settled the Mental Health Lands Trust dispute.  The State of Alaska selected the final 23 million acres of its 103 million acre entitlement.  Settlement of the 1989 Exxon Valdez oil spill resulted in use of the billion dollar fund collected to buy land and support science in Prince William Sound, Kachemak Bay, and on Kodiak and Afognak Islands.  He proposed significant cuts in the state budget by cutting the general operating budget by six percent per year (eight percent with inflation), even though Alaska expected a $1 billion windfall because of higher oil prices caused by the Gulf War.  He proposed placing the windfall into an investment
fund to finance costly megaprojects to help diversify the state’s economy.  Included among the projects was a huge port near Anchorage, extension of the Alaska Railroad, and an $11 billion pipeline to bring stranded gas to Asian markets.

Two projects that caught particular notice, but that Hickel did not push,
were a water pipeline to California48 and an undersea railroad to
Siberia.  He allocated more funds for upgrading village water and sewer systems than the past three administrations combined.  49

During this time of major accomplishments Hickel endured a nagging recall effort. Hickel chose not to run for reelection in 1994.

Wally Hickel was straight forward about politics. Again, from Who Owns Alaska:
Politics is the art of compromise. If those words were carved out of solid granite in ten-foot letters up each side of the Washington Monument, they would be no more revered than they already are in the American capital.  The expression has been used for generations as an excuse for selling out one’s beliefs and “making a deal.”

The man who listens, who finds out the naked truth and goes forward without
compromise, is a truly great leader.  The real challenge for a leader is to sell those ideas he absolutely believes in from the heart. His greatest achieve-ment is to gain support for those ideas that do not compromise his principles.”5

The Permanent Fund is a trust account established under Gov. Jay Hammond as a means to assure future Alaskans–including those not even alive when oil was discovered–are given their share of Alaska’s non-renewable resource wealth. Bill Walker was the first governor (12/2014 to 12/2018) to invade the sanctity of the Permanent Fund and deviate from statute in distribution of the annual PF Dividend. He was a one-term governor.

Now, Gov. Mike Dunleavy is facing strong opposition as he attempts to reign
in State spending and accomplish a return to the statutory intent of the
Permanent Fund. A majority coalition of legislators, many of whom were elected on their promise to protect the Permanent Fund, have shown they believe spending on government–even in a recession–is in the state’s best interest as oil revenues continue to decline.

Alaskans have a heritage of settling these kinds of disputes at the ballot box. Trying to recall a governor for doing what he campaigned on doing is futile. If it didn’t work with Hickel/Coghill, who were elected with a 39% vote, it isn’t going to work with Dunleavy/Meyer elected by 51.44% of the voters.

Wally was a scrapper and good ringmaster. It’s been one year and Dunleavy may need to take a lesson from the former Golden Gloves Champ and remove the kid gloves.