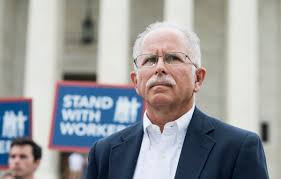 Some 8,000 teachers work for k-12 public schools in Alaska and an estimated 2,500 cycle annually in and out of the jobs provided in more than 50 school districts. Most of these districts providenteacher employment contracts as part of Collective Bargaining Agreements (CBA) negotiated with a local union affiliate of the National Education Association, (NEA) whose state affiliate is NEA-Alaska.

Not all government teachers who work in Alaska are members of the union, however. Some choose to be what are called “Agency Fee Payers,” who only contribute the local portion of dues, which are required as a condition of employment under those CBAs. This is based on the idea that union efforts
get members the salary and benefits they enjoy as public employees. Therefore, all employees of that class should have to at least pay for that portion of union services.

Full disclosure: I worked for NEA-Alaska in the Juneau Headquarters Office over nine years during the time they got the right to strike in state law. I later became an Alaska certified teacher and was required to be a member of NEA over one year in a rural district. I chose to not work for an employer requiring union membership over the rest of my teaching career, between 2003-2017.

Local retired Anchorage School District (ASD) teacher David Nees was a Fee Payer over his 28-year career and during a recent interview explained why he refused to join the Anchorage Education Association/NEA-Alaska/ NEA cartel.

“I believe it was 1986 when we all went to East High to vote on a contract that had been sent to the arbitrator, and the union representatives said, ‘Hey, this is a really good contract’ so we
got to vote for a pig in a poke (the union had negotiated),” said Nees. “Everybody voted for that pig in a poke; what we got was a three-year freeze of salaries and the union got Closed Shop. I became a Fee Payer at that point.”

Closed Shop is defined as a place of work where membership in a union is a condition for being hired and for continued employment. A cartel is an association of manufacturers or suppliers with the purpose of maintaining prices at a high level and restricting competition. Unions supply workers and use withdrawal of services to coerce employers–in this case school boards whose members are often elected
with union contributions and volunteers.

Nothing the union does is meant to improve the quality of public education, utterly nothing.

According to Nees, from that time until today all ASD teachers are required to be members
of AEA or formally declare their Fee Payer status, and pay what a judge annually determines is a “fair share” for union services. Additionally, former AEA President, Andy Holleman is a current elected member of the ASD Board.

But there is another way of looking at this requirement.

“The ASD collects Anchorage Education Association dues, and sends them to AEA, meaning basically AEA works for the district,” explained Nees. “When you pay the local dues you are paying for local representation–so $130 out of $1,400 annual dues goes for local representation while the rest goes to state and national organizations to support the national agenda.”

Nees says there are other reasons he doesn’t want to be a member of NEA/NEA-Alaska; he believes the national agenda is “leftist,” meaning their political agenda doesn’t reflect his views. In fact, that complaint has long been expressed by many teachers who refused to be members and only paid their local share.

In my own experience at NEA-Alaska, teachers were encouraged by the union to be political sheep. A few like Nees are black sheep–who don’t accept things they think could be better just because that’s the way those things have always been done.

And he doesn’t vote Democrat with the herd, either.

“I started teaching at Clark Middle School in about 1983; it was a poor side of town, kids were having trouble getting to school, we had a thousand kids packed in the old building,” Nees reminisces. “About three years later I was transferred over to Hanshew—a school with 1,400 kids—and what I noticed right away was the kids were a year ahead of those I had been teaching at Clark!”

Nees continued: “I spent the next 25 years of my life at that school. I taught mostly Math, occasionally Home Ec, and some other classes. I coached cross-country skiing, cross-country running, and track; all individual team sports, like what I mostly did as a kid. I really enjoyed the time there, raised my kids there, teaching junior high. My wife taught high school, and just retired this year after 39 years at ASD.”

The Nees are Alaskans planning on staying in Alaska. A lot of teachers who retire in Alaska cannot wait to go home—he estimates a third of his cadre of ASD teachers have stayed in Alaska after retirement.

Over the years, Nees has also committed himself to examining education policy, even running for the ASD Board of Education and the Anchorage Assembly. He was chosen in 2014 as a teacher member of the Alaska House of Representatives Sustainable Education Task Force, over the strenuous
objection of NEA.

That Legislative Task Force included two legislators, a former superintendent, a public member, a business accounting professional, a rural Native and Nees as a teacher representative. It examined
Alaska public education and a report about what it found is on a shelf with many other reports examining Alaska public education without much consideration of the union influence on our schools.

The union influence is considerable.

And there is new twist to the paradigm of unions herding Alaska public employment teachers: The U.S. Supreme Court’s 2018 historic decision in Janus v. American Federation of State, County, and Municipal Employees, Council 31 found that the state of Illinois cannot require nonunion public employees to be required to pay an “agency fee” to cover union expenditures for collective bargaining activities.
In a 5-4 decision, the High Court concluded that the state’s extraction of agency fees from non-consenting public employees violates the First Amendment.

NEA President: Regardless of Janus Decision, ‘We’re Not Going Anywhere’

The mandate to extract proportional dues from Fee Payers is in every Alaska state and local government employment contract with the various public employee unions. Additionally, these fee payers typically cannot
vote in union elections or for proposed contracts.

Despite this 2018 Janus decision, the same system is in use by Alaska state and municipal governments to continue to extract dues from all government workers on the assumption that they are automatically union members under the respective CBA and state employment laws.

The Janus decision recognizes that coercing membership in an organization that takes political positions individual members do not agree with is a violation of the First Amendment of the U.S. Constitution. It says teachers like Nees should not have to contribute to tyranny of the majority in what he feels are leftist political  agendas of the National and State unions.

And while the Janus decision found the Fee Payer clause unconstitutional, it is still in most School
District Negotiated Agreements. An example is the recent KPEA teacher contract.

2. The representation fee shall be regarded as fair compensation and reimbursement to KPEA for fulfilling its
legal obligation to represent all members of the bargaining unit.

3. All dues/fees deductions will be made only upon written authorization of the employee. It is the responsibility
of the employee to notify the Association at the same time.

4. Payment of such dues/fees shall be deducted from members in nine (9) monthly payments commencing with the
September payroll as directed by the Association. “

So how CAN government teachers and other public employees now be protected from union coercion in their employment relationships in view of this Supreme Court decision if the employer colludes with the union
to ignore it?

Alaska Attorney General Kevin Clarkson published an opinion this past August saying that the Janus decision requires “affirmative consent” and “clear and compelling evidence” that government
workers who opt to pay dues are not coerced and are informed that paying money to unions waives their First Amendment rights.

From Clarkson’s opinion: “To ensure that the State of Alaska does not deduct union dues or fees from an employee without “clear and compelling evidence” that the employee freely consents to the deduction, consent must be provided directly to the state. “Rather than permitting the union to control the conditions in which the employee provides consent to a payroll deduction from their state-paid wages, the State may implement and maintain an online system and new written consent forms through which employees wishing to authorize payroll deductions for union dues and fees may provide consent.”

Employees must “opt in.”

Of course the Alaska State Employee’s Union has sued their members’ employer because their CBA provides for ASEA/AFSCME Local 52 to be the exclusive representative of all state General Government Unit employees, union membership as a condition of working for the State of Alaska, and feepayers required to contribute to the union as a condition of employment.

Ironically I also worked for this state employee union in Juneau 4-1/2 years and can readily understand why state employees at the bottom of the pay scale might be tempted to forgo union dues to buy food.

High-handed Alaska unions don’t believe teachers and state workers know what is best for their own interests. ASEA is in court trying to find a way to continue fleecing government sheep instead of
allowing them to choose union membership on their own.

Union members are not customers, you know.