Ah,
the mud, the glorious mud! From the time of our arrival at Pyrah’s Pioneer Peak
Farm, we relished the rain turning the rich topsoil into thick and sticky mud.
We were here on Saturday, September 1, for a Fall Festival wherein we paid a
nominal amount to pick anything left in the fields, after a full season of
You-Pick-It harvest.

This
is the largestU-Pick business in Alaska. Through the growing season customers
pick their own vegetables for a reasonable price and children learn about where
vegetables come from. This business model has resulted in an ever-expanding
variety of produce and a community of people dedicated to healthy eating and
sustainable lifestyles.

My
guide–who has talked me into this and some other new adventures–is a woman
who was born on a farm in Kentucky; a farm she still has an ownership interest
in. Waneta Borden knows a lot about farming; this is just the latest turn of my
learning curve about farming, in Alaska.

Since
May, she is also my wife! 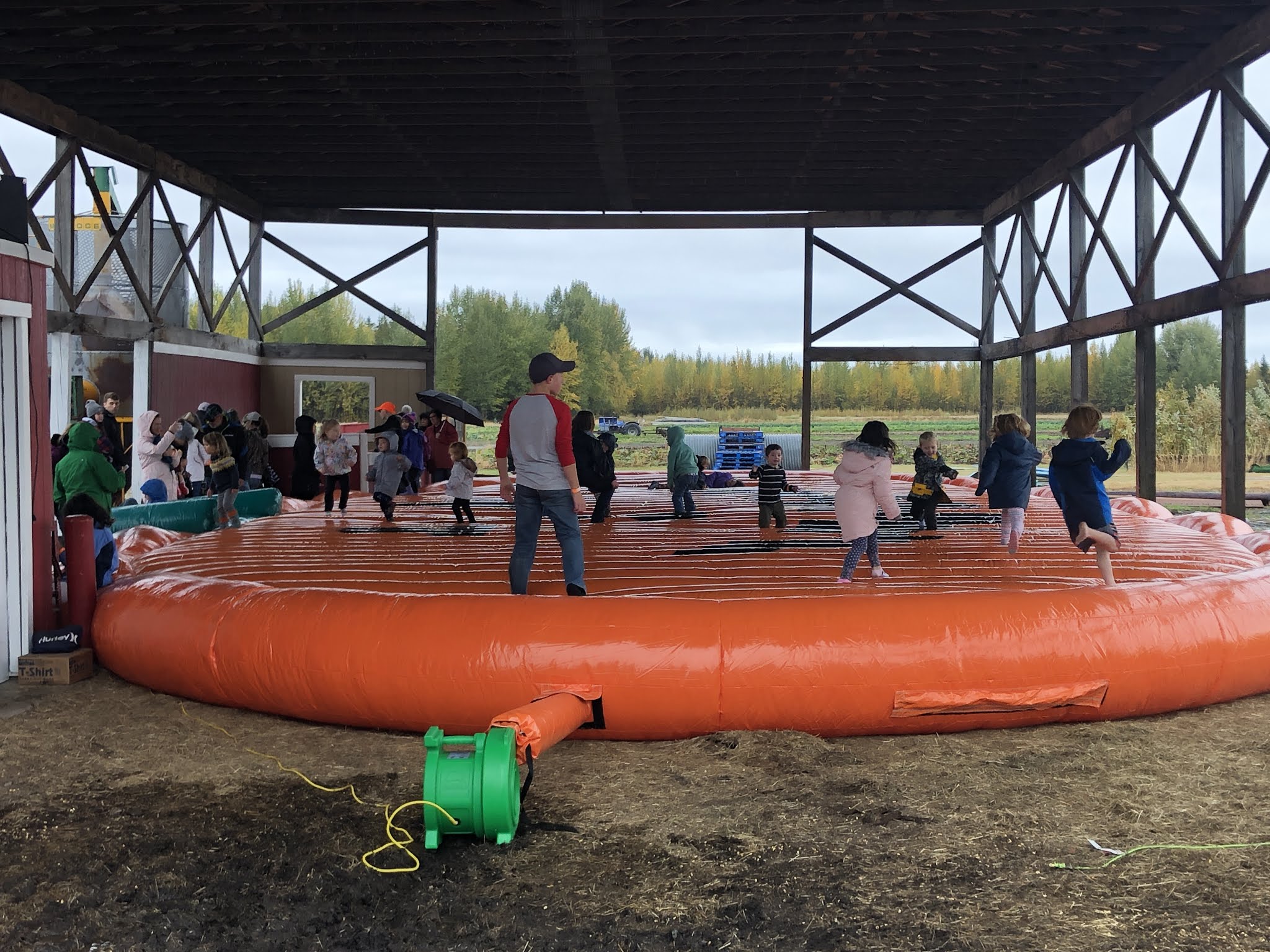 Our
celebration of the harvest began with lining up our truck alongside others
parked in rows in a grassy parking field. Upon entry we were met by booths with
treats and handicrafts, a pumpkin patch, bouncy barns full of delighted kids of
all ages, petting zoo, games, and a band with three gray haired guys in
coveralls playing my kind of country music on guitar, banjo and standing bass.

We
immediately took the hayride tour over a road that recurring tractors pulling
trailers would by the end of the day turn into a river of mud. How have I lived
in Alaska so long and missed this?

But perhaps
the best part for many families I observed was trooping out into the furrowed
fields carrying bags or pulling a wagon, to dig potatoes, or pull carrots, or
cut off broccoli florets. I approached the task methodically–with guidance–while
the old teacher in me asked some of the kids: “Do you always eat your vegetables?”

As a
kid I wasn’t so fond of vegetables. Fresh vegetables were rare when I was
growing up in a financially struggling family in the suburbs of Albuquerque, NM;
or in Anchorage during the early 1960s, or in the Southeast village of Yakutat.
Our vegies came in cans. Potatoes could be fresh, and I liked them so-so.
Frozen peas, and green beans and carrots were better but not necessary for my preferred
meat-and-potatoes diet.

Salad
was okay but rare.

Pyrah’s
farm also provides opportunity for regular fresh produce for locals  through a Community Supported Agriculture
(CSA) program marketed as “a partnership between farms and consumers.”

Enrollment
begins the first of the new year and over 15 weeks subscribers receive fresh
vegetables starting in June. They are packed in a reusable plastic box
estimated to feed up to a family of four at a cost of about $40 per week.
Contents of the boxes will vary over the course of the growing season, for a
rich variety of healthy farm fresh goodies, including: Bok Choy, Napa,
Broccoli, Beets, Cauliflower, Cabbage, Daikon Radishes, various Lettuces, Kale,
Collards, Kohlrabi, Spinach, Strawberries, Raspberries, Onions, Cucumbers,
Zucchini, Crookneck Squash, Dill, Cilantro, Basil, Mint, Turnips, Peas, Snow
Peas, Sugar Snap Peas, Beans, Potatoes, Carrots, and Rhubarb.

That
represents a large variety for our short Alaskan summers!

In
early high school I lived a couple of years in Washington’s Okanagan Valley, on
an apple ranch, where I came to appreciate the manual labor of climbing a
ladder to pull bushels of fruit from tree limbs. Waneta says every kid should
have to spend a couple of years on a farm but my experience is lacking the real
farm experience she is talking about.

Given
that farming is hard work, it is quite a tribute to this Palmer family
originally headed by Frederick “Ted” Pyrah–which over more than three decades farmed
a tract which was originally part of the John Loken homestead, sold during the
administration of President Franklin Roosevelt to the Alaska Rural
Rehabilitation Corporation (ARRC), which offered long-term, low-interest loans
to colonists who came to Alaska to create a new agricultural community in the
Mat-Su Valley. In the face of the Great Depression of the early 1930s, the
Federal Emergency Relief Administration (FERA) decided to establish a colony in
Alaska’s Mat-Su Valley with intrepid souls who knew what they were facing. In other
states resettlement efforts under the plan were to already existing
communities.

In
all, 202 families came to Alaska in 1934 to settle and start our agricultural
economic sector. Initially the land was divided into 40-acre tracts. AARC hired
colonists to work on roads and build infrastructure necessary to sustain the families.
It also provided household goods and farm equipment and provided health and
recreation services. By July of 1936, 67 of the original families had left the
colony.

But
those who stuck with it have left a legacy. The colony experiment cost five
times more than estimated, at $5.4 million, and by the end of the second year
many families were at least $10,000 in debt. But by 1940 the Matanuska Valley
had become a stable agricultural community with 118 tracts of land under
cultivation.1

The
Pyrah family moved here in November of 1979 to run the Pioneer Peak Farm for
the Church of Jesus Christ of Latter-Day Saints, according to Janet Dinwiddie, daughter
of Frederick, who together with her husband is now in the process of buying it
from the church. Her two kids, 19 and 17 years old are also active in running
the farm

“It was
run primarily to provide food for the church’s welfare system and volunteer
church members aided in the work,” she explained to me between responses to operational
needs during the course of the festival. 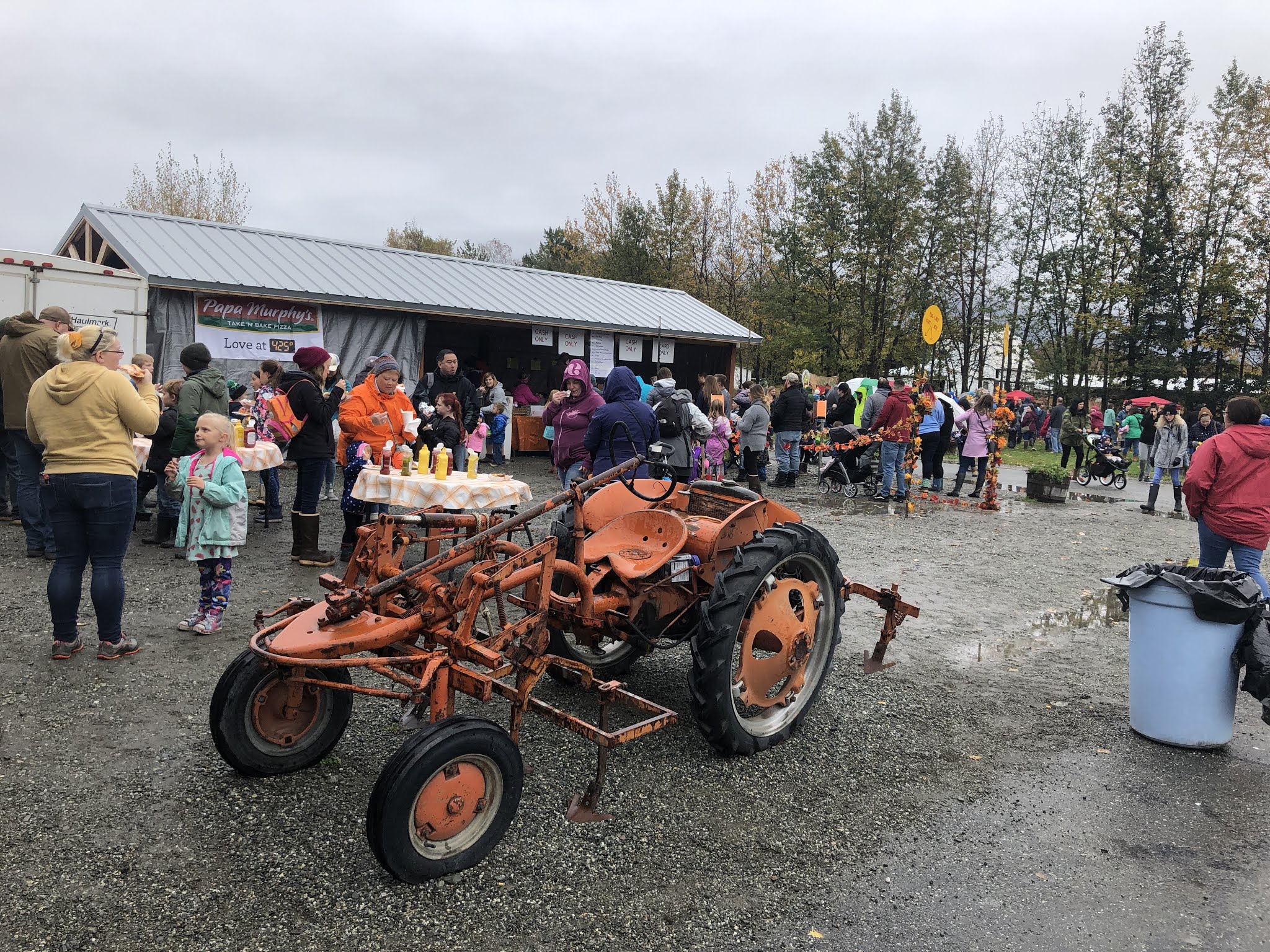 In 1988,
the church decided to discontinue the welfare farm program in Alaska and the
Pyrah’s took out an option to lease the 277-acre parcel.

“Every
year we do the Fall Festival about the third week of September,” she added. “The
Friday before the festival we do a Special Needs Day; it is a little less loud
and we provide handicapped-accessible hayrides, and whatever accommodation people
might need to have a full experience.”

So, an
end-of-season festival makes a lot of sense—but wait there’s more!

In
mid-July the Pyrah farm sponsors a Strawberry Festival to celebrate all
things summer. This festival centers around coming of the strawberry crop and features
the Crazy Rooster Market & Arts Fair, live music with special guest
concerts, agricultural themed rides and games, and the annual ButteAthlon Fun
Run and Triathlon.

And,
the next big festival at Pyrah’s will be during the Christmas holiday,
featuring traditional activities including Toboggan rides, Ice Skating rinks,
and Mrs. Claus Mercantile & Sweet Shoppe holiday confections and gifts. A
Nativity with music and narration contributes to the Christmas theme with
hayrides through the beautiful Matanuska Valley winter wonderland. 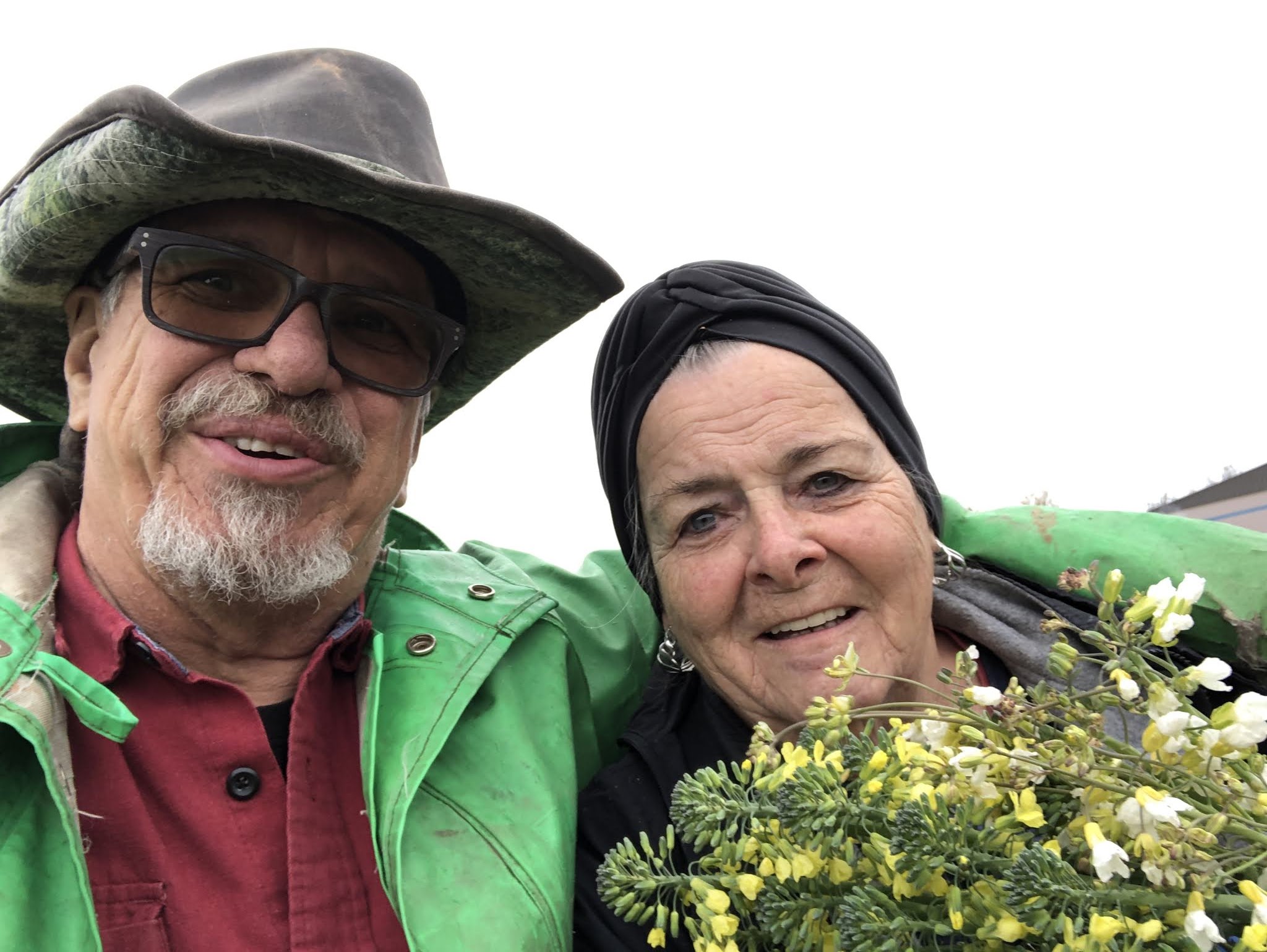 Today
we learned about where we can go next summer for fresh vegetables we pick ourselves and pay for. Waneta is preparing all that we gathered Saturday and I
will help with preparation for freezing or storage. Given my failures in trying
to grow gardens in the past, this is a great option.