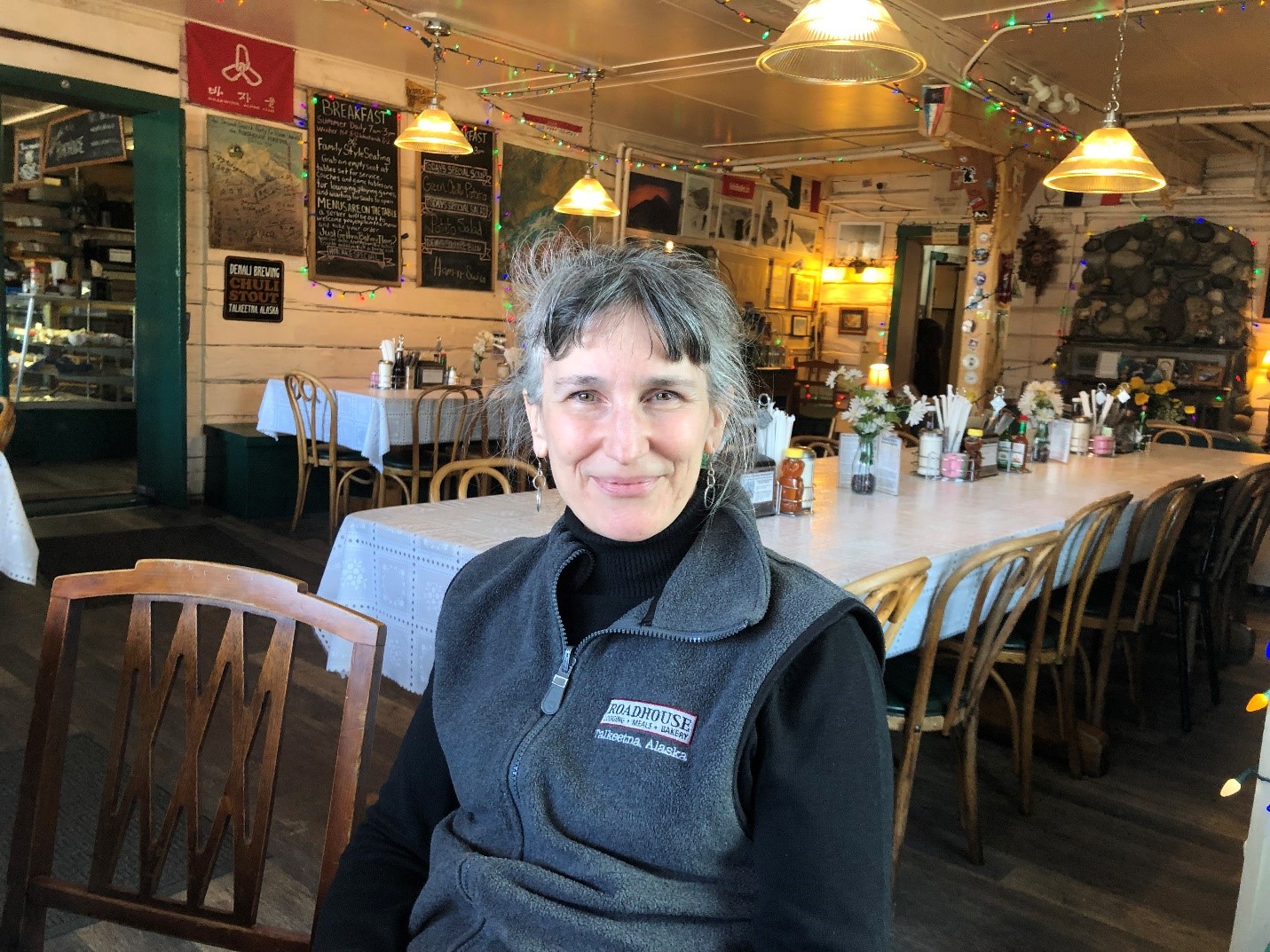 The romantic notion of owning an historic Alaska Roadhouse became a reality for young Trisha Costello in 1996 with the help of a personal loan from her dad.

Over
the decades since she has kept the Talkeetna Roadhouse open year-round, paid
her father back, provided jobs for a community of some 800 people, and learned a
lot about what it takes to prosper as an entrepreneur who loves Alaska and the
community of Talkeetna.

She
reflected: “The idea of a roadhouse was appealing, it made sense: A place where
travelers would stop for a decent cup of coffee, and a warm bowl of soup, and
meet other folks to find out how the trail was north and south, share stories,
have a decent place to sleep—that’s what I thought I was getting into.”

But
she quickly realized she had gotten into the restaurant business, and had to
figure it out.

I really didn’t have that kind of experience, Costello
admitted. I didn’t have a business degree or restaurant management experience.
I had cooked for employees as an employee at the Mt. McKinley park concession
but I didn’t have much experience. So I gratefully learned (how to run a
roadhouse) as the community grew–as tourism grew in Talkeetna–I grew with it.

That meant Costello, during her 30s and 40s, spent 15-16
years running the business from the baking table.

I was the early baker; cinnamon rolls are kind of our
thing and did everything from scratch, Costello continued. I pulled all of
the old bread pans out of the barn—they had been used back in the ‘50s and
‘60s, and we started baking bread again from scratch. Taught myself recipes,
started collecting recipes and figuring out with various employees what worked
best as we went along into the early 2000s—spent a handful of years just being
an entrepreneur, figuring it out as I went along, you know?

At other times, while rolling silverware into napkins, she kept an eagle eye on the floor of her dining room during the summer hubbub of guests and employees coming and going.

I think we remodeled the kitchen consecutively each year for the first 8 years. It was a lot more like a “home kitchen” when I first got here. Even today I say we play the Hokey Pokey; we have one foot in a commercial kitchen and one foot in Grandma’s Kitchen.

By 1998-99 the large tourism lodges opened up and that changed the tourism dynamic, according to Costello.

When I first got into it I didn’t understand the industry of tourism, she explained. I have since really come to enjoy all the people I have met in that industry—the idea of promoting people traveling and experiencing communities, to land in a spot and experience a community, to really unpack and become part of the town—is something I enjoy sharing a lot!

Some say the tourism industry doesn’t contribute in a big way to the Alaska economy because so much is owned by big corporations that run it and leave the scraps at the end of the season. How do you see our tourism industry beyond your place in it?

Well, I definitely keep all my scraps here—right in this town! There is a lot of money that comes in and a lot of money that goes out, Costello explained, but I believe a lot of those big players are very conscious of their footprint here and contribute a lot.

Alaska doesn’t have a lot of people to pull from for the workforce here; it would be great if a lot of the tourism jobs could be filled by people who actually live here. A lot more money would then stay in the community.

Costello continued: I call this the ‘accordion style of doing business. I had to learn a painful lesson when I had to buy my dad out after he had helped me with the initial capital to purchase the property and business. He was not an on-site owner and looked at it from a business perspective while I looked at it from a community perspective. My commitment to keep the place open in all seasons wasn’t something he understood. He saw that in the winter it really didn’t make any money.

In fact, we still don’t make any money in the winter but we don’t lose as much anymore! she quipped.

After all of these years you have learned the tricks for making a seasonal business work?

Being in business means being innovative. Also, I believe in the (traditional Alaskan) Roadhouse as a place that is always open and is a community living room; it takes me 50 people in the summer to make this place work, staffing wise, and I keep 20 on through the winter. In a town of 800 people that’s not too bad! Costello declared: That’s 20 jobs for the community that I am proud of providing.

Continuing: Maybe that is part of what has kept me engaged—that challenge: How do you make it work in the summer; bulk up to accommodate all of the people who come here in a community like ours during summer, and be efficient (during winter) so you can still provide open doors without draining all resources. When you add on to that the fact of our historic 100-year old building requiring maintenance and upkeep, this business is like an accordion. It is not for the faint of heart but the years have clicked by!

It’s also a place year-round climbers of Denali can get a last great breakfast before taking on the largest mountain in North America.

Did I already mention The Talkeetna Roadhouse is for sale?