While many residents of the Railbelt from Eagle River to Eklutna were enjoying a cold one in their taxed-to-the-max Municipality of Anchorage home on Friday, other locals gathered at Lion’s Park Clubhouse to talk about quality of life — learning about EaglExit possibilities without Muni.org.

Happy folks who obviously knew and respected each other were sharing free pizza and water or coffee and talking about Eagle River detaching from the Municipality of Anchorage. Some 400 have already taken an on-line survey to express interest in the topic and they were ready to learn more about Eaglexit.

Kind of like a thinking about a divorce while you can still talk to each other.

Following a Powerpoint presentation by Michael Tavoliero, former Anchorage Assembly member Dan Kendall reported on his experiences dealing with the Muni in various positions regarding a number of issues.

One guest speaker expressed surprise at how many people filled the room.

“When they asked me to talk about the requirements to detach from the Municipality of Anchorage and form your own local government, I thought it might be a handful of people, as is typically the case,” said Edgar Blatchford, a former commissioner of two state departments dealing with local government and economic development.

“Our constitution was written to encourage government decision-making at the level closest to the people so this is an appropriate discussion,” he said. Blatchford teaches at the University of Alaska.

for establishing a municipal government

Has the Anchorage Municipality become too unwieldy to address the needs of JBER, Eagle River, Chugiak, Birchwood, Peters Creek, and all points north to Eklutna?

Muni District 2 does not align directly with legislative districts of this area. Rather, those who live in the area elect two Anchorage assembly members through mail-in ballots on an election date that is not aligned with any other government election time. Five other Anchorage election districts also have two people each on the Assembly.

Organizers who have put time and some personal resources into the Eaglexit effort are Michael Tavoliero, Matthew Hickey, Gordon Banfield, Thomas Williams, Wayne DeVore, Benjamin Westveer, and Kimberly Collins. They say the pump has been primed and now they need to know if we need a garden hose or a fire hose.

According to the organizers, the District 2 population is approximately 50,000. By detaching from the Municipality of Anchorage, District 2 would become the second most populous municipality in Alaska. The City of Fairbanks, for comparison, has 35,000 people.

These are local people who want more say in local government decisions impacting their own neighborhoods. Their mission is to discover the social, political, and financial costs associated with the development of a municipality (city or borough). Anyone who ever thought they might like to become active in politics could learn a lot by getting involved. 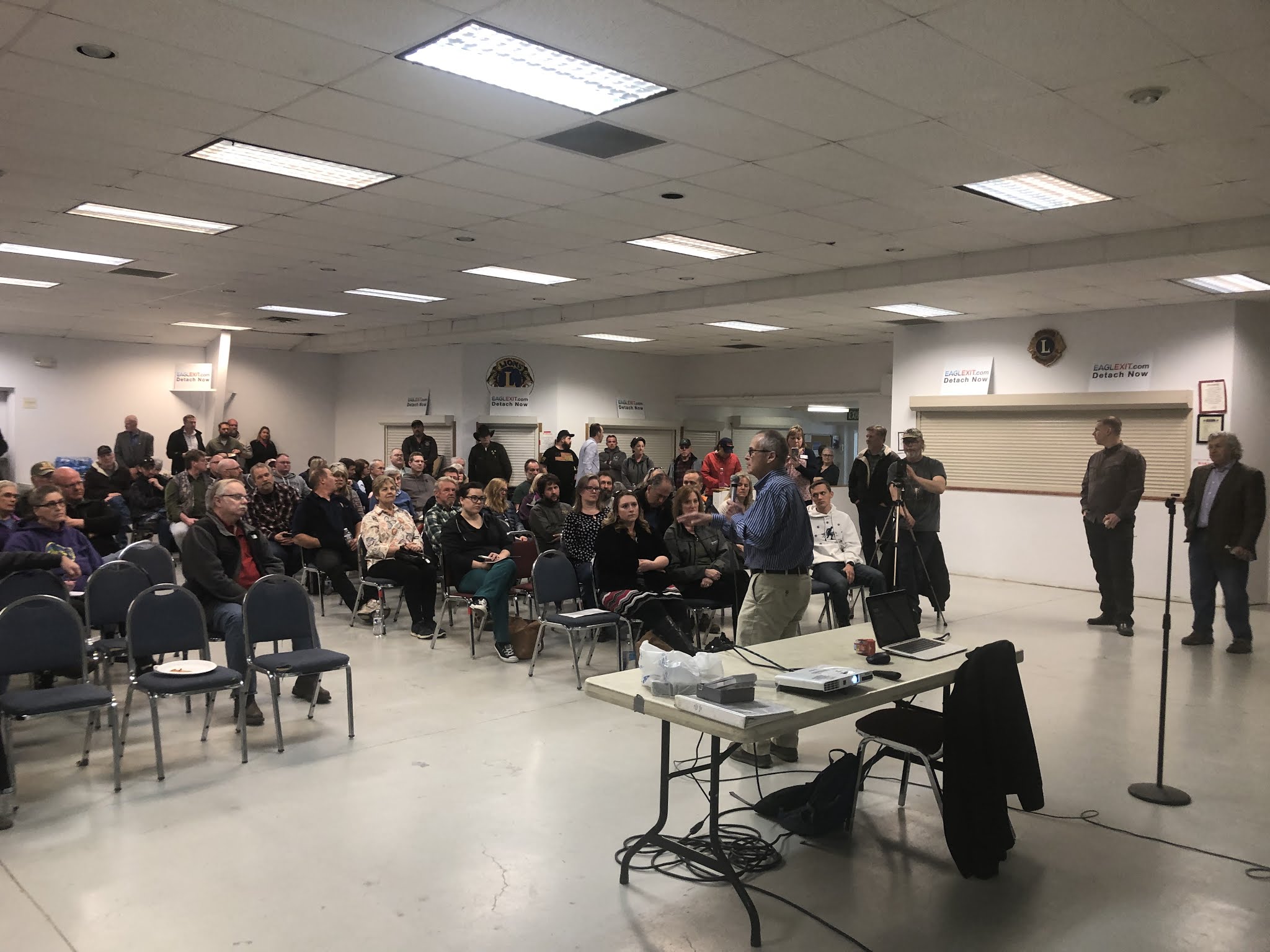 Is this feasible? Didn’t Eagle River pull out of the Muni before and was it not sent back into it tail-between-its-legs by a judge? Who will pay for this new effort?

A 2007 Anchorage commissioned study of detaching this part of Anchorage found that the MOA will experience little to no significant economic hardship as a result of detachment and that there may even be a reduction in costs for the Muni. This is because some budget categories for 300,000 people will likely not be shared with a municipality of 50,000.

This region has some resources the Muni.org depends on, too. The Eklutna Lake water reservoir, the landfill, Chugach State Park access, a prison, and a variety of amenities people in Anchorage visit.

Here are the detachment talking points as described in a white paper written by the Eaglexit board:

“Smaller is Better,” an Eaglexit would:

How many checkmarks can residents of this area put on that list?

This isn’t about that tired and trite idea of “starting a conversation.” This is about people who have had enough, and are ready to take action to address a dysfunctional relationship.

Tavoliero estimates it will cost a million dollars, and require a lot of involvement by people who live in this region, because the best part of living here is it isn’t really Anchorage.

Donn Liston has lived in Alaska since 1962 and in Eagle River since 2010. He was a reporter for the Anchorage Daily News during pipeline construction and is a retired teacher. He was named a BP Teacher of Excellence in 2013.