First published by ECHO Magazine, May 2019

I Learned about the magnitude of the Gulf of Alaska as a youth in Yakutat when my father decided we would take up commercial fishing. 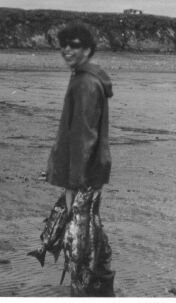 WWe lost everything; boat, nets and Dad could have lost his son.

Yakutat Bay is one of the predominant geographical points along the coast of the Gulf, the shores of which run from the Alaska Peninsula and Kodiak Island in the west to the Alexander Archipelago of the Southeast Alaska Panhandle, south. Alaska’s largest glaciers, the Malaspina and the Bering, feed into the Gulf. This coast also includes Cook Inlet and Prince William Sound.

Weather in the Gulf can be treacherous and is a generator of storms which impact our shores. They move along the coasts down to Washington and Oregon. Juneau is somewhat protected from the fury of Gulf storms by the 80 miles of land mass from the coast to our capital city, but Sitka faces the gulf head-on.

Dad was a civilian contractor on the White Alice Early Warning System during this time in the mid-1960s, and was able to bring his family to live in rude housing at Ocean Cape–located at the western tip of the Phipps Peninsula, 4.6 miles west of Yakutat in the Malaspina Coastal Plain. Ocean Cape is a raised promontory that extends deep into the Gulf, and is connected to the mainland by a larger mass of land rather than a thin land mass a peninsula would have. Ocean Cape had been built during World II and the road was designed with many curves to make it impossible to land an airplane on.

We drove some 10 miles each way to get to school the year I attended 8th grade at the Yakutat FAA School.

As a youth who had attended 7th grade at Orah Dee Clark Junior High school in Mt. View, I was an angry kid. Previous stories describe the circumstances of my anger.1 My father determined he needed to get his family out of Anchorage before I ended up in jail. My stepmother could not control me while Dad traveled the state working at the various sites.

Yakutat was a magical place for a youth of 13-14. The cliffs along the shore look down on beaches like you find in California or Hawaii. Today Yakutat is a premier place for surfing on the waves generated in the Gulf. But back then a bounty was offered for hair seals–I could perch on the cliffs and shoot them when their heads appeared in the surf. When their carcasses rolled onto the beach I picked them up and sold each face mask for three dollars. The hide was worth another $30-$50 after a lot of work cleaning and cutting off the thick layer of fat.

I fished, I hunted, I trapped.

I hung out with a native kid a couple of years younger than I. He showed me how to cook a cutthroat trout on a stick over a fire and pick out the whitened eyeballs to eat as a delicacy. We shared many valuable hours of youthful freedom in pristine natural surroundings.

Mostly men worked at the Ocean Cape Site, and many had boats kept in the water during the summer or on the banks of the Ankau Estuary on the lee side of the cape. Our housing faced the Ankau.

One locally-built wooden boat was turned over and idle on the sand burm in front of our apartment. It was brown in color and had the name “Okie” stenciled on its bow. I contacted the owner of that skiff and he allowed me to row it around the protected salt chuck. That boat was heavy, and I had to get help from my pal to turn it over. We waited for the tide to get it into the water. It was 18 feet long with a well about midship where an outboard engine could be placed. A commercial fishing net could be loaded in the area behind the motor. A drain hole was in front of the motor well so a plug could be pulled and natural drainage could occur through centrifugal force when the boat was on step flying through the water.

For me, just rowing that boat around the area was all I wanted to do. But Dad had a different idea.

Dad made good money in his job. But for some reason, he decided we needed to try our hand at commercial fishing. After all, these other people were doing it and Donny needed to be doing something productive, you know?

So Dad bought the “Okie” and the worn-out old engine that came with it. He mounted it on the boat, and I had a glorious time getting it “ship shape” and running it around the Ankau. Sometimes I went into Yakutat Bay.

Next, Dad bought three used fishing nets from somebody in Washington and a newer used motor.

Dad bought the licenses, and we worked feverishly as the season-opening day approached, including repainting the Okie so it no longer had that name on it—a name my father, from Oklahoma, found offensive. The previous brown was now bright yellow and still tacky when we shoved off to the fishing grounds. We had stretched out the net and pulled it over a new roller into the bulkhead behind the motor. Dad had tied nearly invisible strings around the webbing near the top and near the bottom to make it easy to move.

I remember the beautiful day we set out, and Dad decided to set our net on the Cape instead of in protected shores where others who depended on fishing for their livelihood fished. I drove the boat to shore and hooked the endline to a solid bolder. Dad said he removed the ties on the webbing and I faced the bow toward open water and powered up. Unfortunately, one of the ties at the top had not been removed and by the time I could stop the cork line was stripped from the webbing.

Back home for a new net.

The second net worked better. We offloaded it into the water properly and quickly began to catch fish, including some salmon. Because of our location, we also caught a variety of other unusable fish and crabs. This tangled our net and created a lot of work for me to do while Dad was working his day job.

By the end of the first week that net was also retired as being too tangled to use.

The second week, using the third net, we learned why nobody else fished on the Cape. I returned to the set running late at the time we were supposed to have our nets raised. The waves from the Gulf were building into whitecaps. I began pulling the net in with fish, crabs, sticks or whatever in it. I kept the bow facing the sea, but waves were starting to break over the boat and a square 5-gallon bucket was necessary to bail water out.

Suddenly Dad appeared on the beach. I wanted to get the net into the boat first, but he insisted I land so he could board. This made the boat go broadside to the waves. I urged Dad to bail the boat while I pulled in the net.

Soon the entire boat was below the surface. Empty gas cans and anything else that would float was heading to sea.

I was shocked that it happened so fast and we both abandoned the boat as being completely out of our control.

I was out of breath and heartbroken on the beach. Dad said I had done everything I could under the circumstances. I said: “I cannot believe it went down so fast! Weren’t you bailing?”

Dad replied: “Yes, I even pulled the plug and it still went down!”